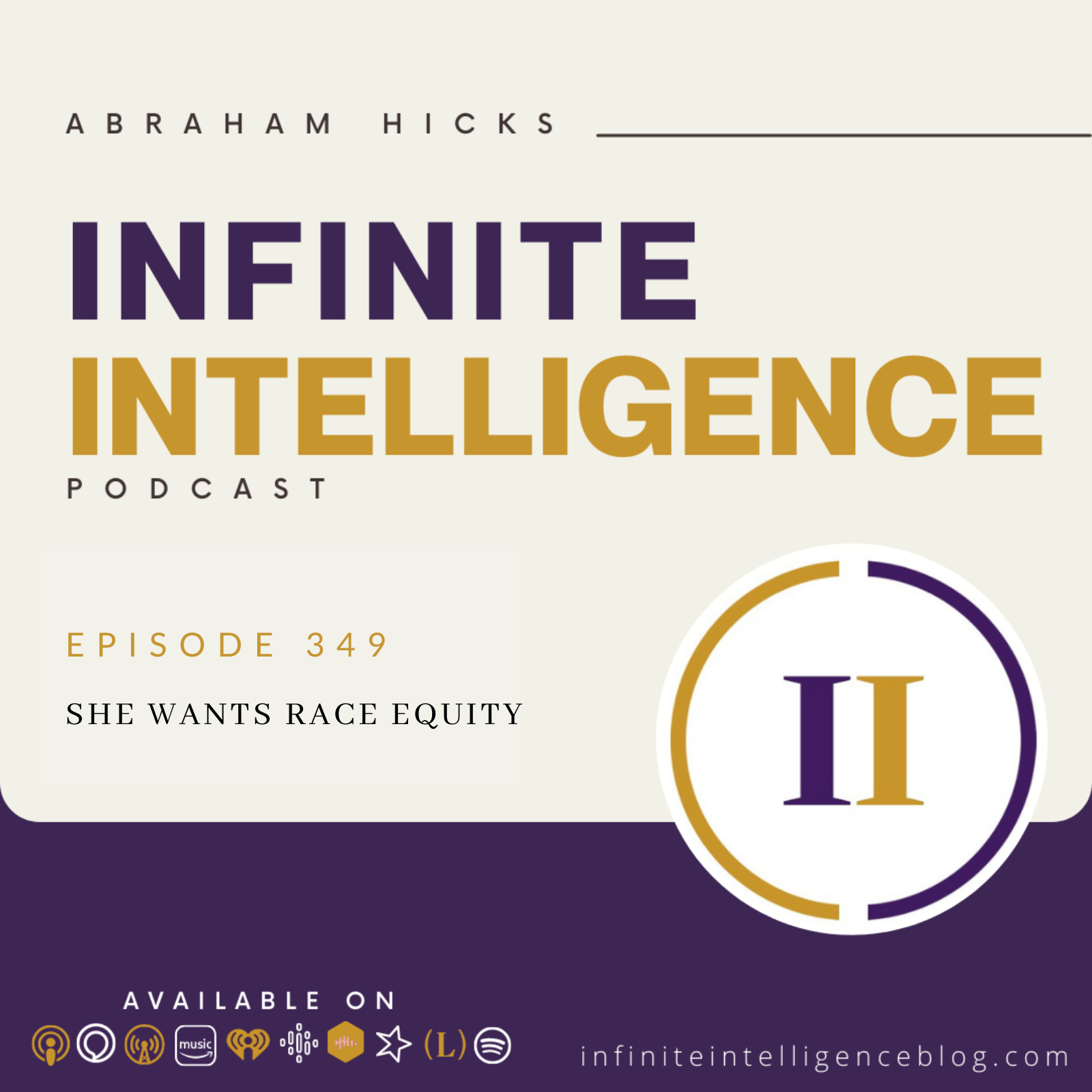 Thank you. I have two questions. The first one is, I teach children. And I teach yoga and I teach nonviolent communication. And I have a powerful desire to contribute to greater equity and justice in the world. And particularly, what’s coming to me now is race equity in this country is what race equity.

And so in the circles that I find myself in, when I think about focusing on what I want, and what I want to create, and inviting others to do that with me, I’m not quite sure about how to not focus so much on what I don’t want. Well, you’re jumping ahead too much. Because if you could just accept for a little while, that observing what you’ve been observing has caused a powerful desire to be in your vortex. And that if you can do the energy work first, which is just fine thoughts that Sue’s you thoughts like, it isn’t here yet, but it’s coming. And we’ve come so far, and we will go further.

And things are getting better, and things are always working out. And here’s one that will challenge you just a little bit, but we want you to hear it anyway. Things are not even but they are always fair. Because Law of Attraction is always responding to the vibrational output. So when you accept that even in your own experience, you cannot attract for yourself around what you believe. And so it is a gradual shifting of belief that is necessary for the billions of people and the billions of requests that are in this vortex. The hardest thing to accept, in what has seemed like an action oriented world, is that it isn’t the action that is making it go.

The hardest thing to accept in an action oriented world is that it is vibrational, which is a different discernment, which requires emotional awareness, and the ability to mold your emotions into something that feels better. And one of the hardest things ever is to witness injustice and not feel it. And so you might ask, well, if someone who was a master of alignment like Jesus, there have been so many can look at someone who is obviously sick and not say sickness, then couldn’t someone like that look at someone who is not believing in their well being and believe in it so much that they begin to believe in a little bit too.

And that’s where your work comes in. You can’t look at what is and move anything beyond what is you’ve got to look beyond what is manifested. And that’s why we say so often because we so much want you all to hear it and understand it and accept it and know it as we do. All of these things that you’re asking for are already a vibrational reality. And that’s why it’s so painful to you, when the now hasn’t caught up with it. Because the larger part of you is already over there knowing that and when you look away from what your inner being knows at something that isn’t allowing that quite yet you feel the discord have that in such a powerful way.

And as our friend was talking earlier, he had 40 years of asking and wanting and asking and asking and asking. And so it was a really strong discord that was within him. So what it comes down to is you have to not need the evidence of the improvement in order to know that the improvement is there. Sometimes we’ll change the subject and just talk about something so off the subject that it disarms you a little bit, let’s talk about, like wanting $500,000 for your cause, and you want it right now. But you don’t believe that it’s going to drop into your experience right now.

Because there’s too many people involved in it that you don’t have any control over and never will. But you can find the feeling of it. And if you can find the feeling of one who’s connected to the feeling of what you want is more powerful than millions who are not. So your influence must be in the vibrational realm. What happens with so many oh, we’re going to go into this really important conversation because what trips most people up so you come along, whether you’re hearing it from us or others or whether you’re just intuitively knowing it, maybe you’re getting it directly from your own inner resources.

So you’re feeling good a lot about whatever subject you have chosen to feel good about maybe something important like this one that is so important to you. So you’ve brought yourself to a place of feeling really good. And now an idea comes to you or a desire that has manifested, Oh, it feels so good. And you revel in it for just a little bit and you manage to stay in step 3453453434344444444. So momentum is flowing. And now you’re beginning to see the results of what you have wanted. You’re beginning to feel it happening, you can feel it happening.

And now some sort of manifestation occurs. And oh, you revel in your deliberateness. You give yourself the badge of a deliberate creator, you say, I saw contrast, and I chose from the contrast, and I put it in the vortex. And I trusted that my inner beam was tending to it. And I focused upon that, and I felt it and I aligned. And I got in step three, for step three for step 34444444. And more ideas came and off, I went, and I am a passionate, deliberate creator, and look at what I’ve created.

And in the moment that you look to the evidence of what you’ve created, and then tried to defend it and explain it to others, that’s where you usually begin, once again, re introducing resistance into the equation, so that you don’t really allow the momentum to continue as it is capable of doing because you have this, see it, hear it, smell it, taste it, touch it. habit that makes you want to look to the manifestation for the evidence of how you’re doing.

You’ll feel good so much of the time, because you’re not the only one. Everyone who has ever been abused or misunderstood, or discounted in some way or treated unfairly has put something in that vortex you ought to see what that vortex is the equality that has been asked for and accomplished. And do you know the equal opportunity of accessing non physical energy? Do you know that no one is left out of that. And that only an individual can leave themselves out of anything.

You can only do it to yourself, that’s so hard to hear. Because when you’re feeling left out, it feels like somebody else must be responsible, because you would never do that to yourself. You would never leave yourself out of the well wishes that you desire for yourself. So somebody else must be doing it, but nobody else is doing it. And so once you understand this process, and once you care about how you feel. And once you find the thoughts that feel best and focus, they’re not to create a movement and not to fix something that is broken because that will get you every time when you turn to fix what’s broken, your attention is upon what’s broken and you lose your connection and you got nothing to give.

So, you heard her subject, but did you hear the greater context of it? It doesn’t matter what the subject is that you’re talking about. So this is the most significant thing that we’ve asked you in the leading edge F illusion of this work of deliberate creation that there was we just offered something to this equation that we want you to take away and focus on for just a little while. You can do the work, and you are and you can get into the zone. And you are and you can get the impulses and you are and you will accomplish a manifestation. Yes, you will. Don’t look at it. Don’t do it for the manifestation.

Because that’s the trap that makes you compare and then makes you feel guarded and makes you want to protect someone asks you so what are you up to? I’m the creator of my own reality. Well, what are you creating all kinds of wonderful things? Like what I never talked about them?