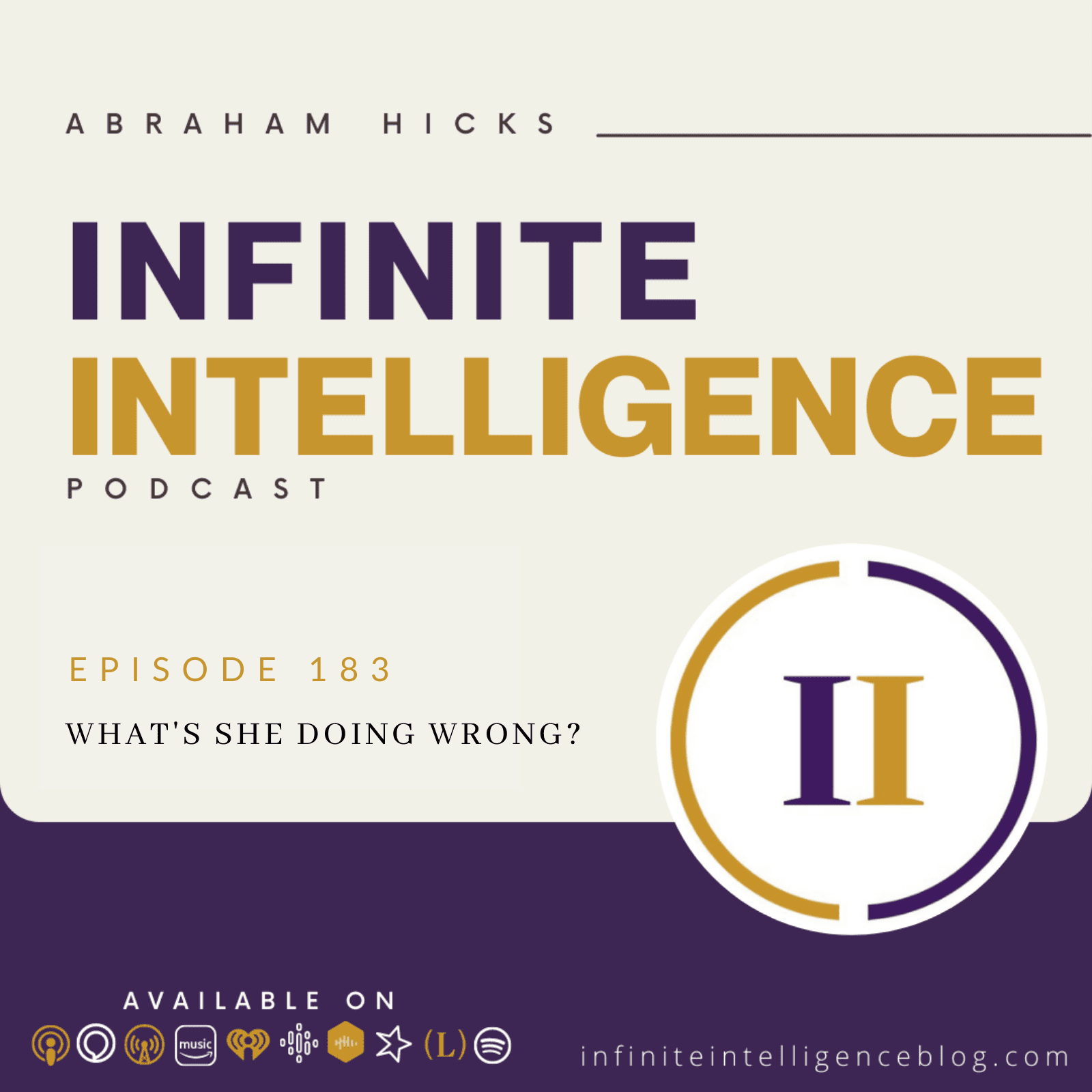 I suppose I’ve also put a lot of stuff in my vortex. Yes. So how can I get it? How can I get into my alignment and get to my stuff? How do I get the money out? Into the bank? What do I do wrong? Well, there’s no answer to that question. What am I doing wrong? Because that implies that nothing is ever working for you. And that isn’t true. So that’s just focusing negatively, unnecessarily. But we know what you mean. If there are vibrational routes, to things that I want to be manifested, how do I make them grow?

And we say, That’s not your job, that step to that source, that’s law of attraction, the things that you want are growing, growing, growing, they’re just dating, they’re getting ready to be ready for you. So the only question is, how do I get ready for them? How do I ready myself? How do I put myself in the receptive mode? Because you see, in this vibrational universe, you’re transmitting a signal.

Have you ever had an idea occurred to you that for a moment, felt like elation to you felt like what felt like elation? An idea that just felt? Yes, yes, I want to do that. Yeah, then that means you were in that receptive mode. For just a moment, however long you felt good. You were in the receptive mode. And you were beginning the translation of the vibration into thoughts. And then the thoughts into things. You got to wonder how did the things get here? You are translating vibration into things?

Have you noticed that there are no pipelines from outer space that are bringing resources here and yet look at the expansion of ideas and resources that you are discovering and creating as a people here, or as a planet here as beings on this planet? It’s in a state of constant evolution. And so you gotta wonder, how do these thoughts get turned to things? How do I, as a creator, turn my thoughts to things?

Well, the way you do it is by sustaining the thought long enough that it gathers enough momentum that the momentum carries it further into the resources that brings the things about. So the answer to your question, you said, it’s a simple question. And could there be a simple answer, the simple answer is momentum. And the answer to momentum is caring about the way you feel.

But just say more things about what are working and fewer things about things that are not working, and then watch how the fulcrum of your energy begins to shift. I’ve been trying so hard, you said, I’ve been trying so hard. Well, that means I’m trying through effort. I’m trying through action. I’m trying, I’m trying. But we want you to do, you’re trying and we don’t even like that word. We want your emphasis to be upon Thought and Feeling Thought and Feeling thought and feeling.

So when you said you’ve been trying so hard, give us some indication of what you mean by the trying make efforts to like one effort like what think positive to see the pictures of the things that I would like to have to feel what it would be like to have the thing, right, so if you’re really talking about trying in terms of thought, and not feeling like you’re making any headway. What that means is, while you’re offering thoughts toward what you want, and you’re calling that trying, you’re offering many thoughts about what you don’t want without even realizing you’re doing it.

Oh, but think how much better off you’d be if you just didn’t look at the sad thing at all. Sometimes it’s impossible. No. No, never just, it’s not ever impossible. It just feels hard. Because that’s where your patterns of thought have been. That’s where the momentum is. So if the momentum is stronger this way, then it feels like real effort to try to go this way. But when the momentum isn’t so much this way, you won’t feel like any effort at all to go this way. You got that.

So this conscious creating is not only about thinking about what you want, and what feels good, it’s about ceasing the conversation. It’s about catching yourself in the middle of it. It’s about noticing just your word. It’s impossible. Oh, what strong momentum in opposition to what you want that is? So next time you say it’s impossible, stop and say, Wait a minute. That can’t be it’s not impossible. It’s just hard. So we’re going to ask you some questions. And you’re really going to like this.

Well, we’re going to say something ridiculous or pleasant. Unpleasant. What’s a softer word than unwanted? Wanted? way softer. But what’s incrementally softer than unwanted? Sometimes unwanted? That’s easy, isn’t it? So it’s about catching yourself incrementally because law of attraction won’t let you make big jumps. It only gives you things that are in the vicinity of where you are. And humans are we love you so much. We do you know what’s coming next.

And you have plenty of evidence of your own life already. But the evidence of your own life shows you the possible, you say. So there are things from where you stand, look, not possible. You can’t be in Rome. Now that is impossible to instantaneously be there. But Are any of you really asking to be transported from one place to another in a moment? And so aren’t we talking about the same thing? Isn’t it fine to give yourself the opportunity to take the journey from here to there?

And isn’t it fine to give yourself the opportunity to take the journey and enjoy the journey to know that the impossible is going to be more possible, more and more and more and more possible. And then one day, you’re going to wake up docked at the port in Rome, and you’re going to say my dream has come true? Well, it’s not so different, taking those vibrational journeys, is it. But if every day, if every day, you said impossible. In other words, in a real enactment of what goes on with so many vibrations, if that feeling of impossibility, just because you can’t be in Rome today.

And as you do that, then the evidence of the releasing of resistance, you stop putting that emphasis, or those engines on that end of the track, and put more and more on this end of the track. So not only do you move more swiftly, but you feel more joyous as you move. And before you know it, that destination almost feels irrelevant. Because life is causing you to feed more into the vortex. The vortex is churning and gathering the cooperative components.

You’re in alignment, being surprised and delighted all day, every day by new manifestations that are coming to us through the translation of your own realization. You see, you feel better, don’t you? Yes. Yeah. So now you can’t even ask that original question, can you? It’s in a different place.