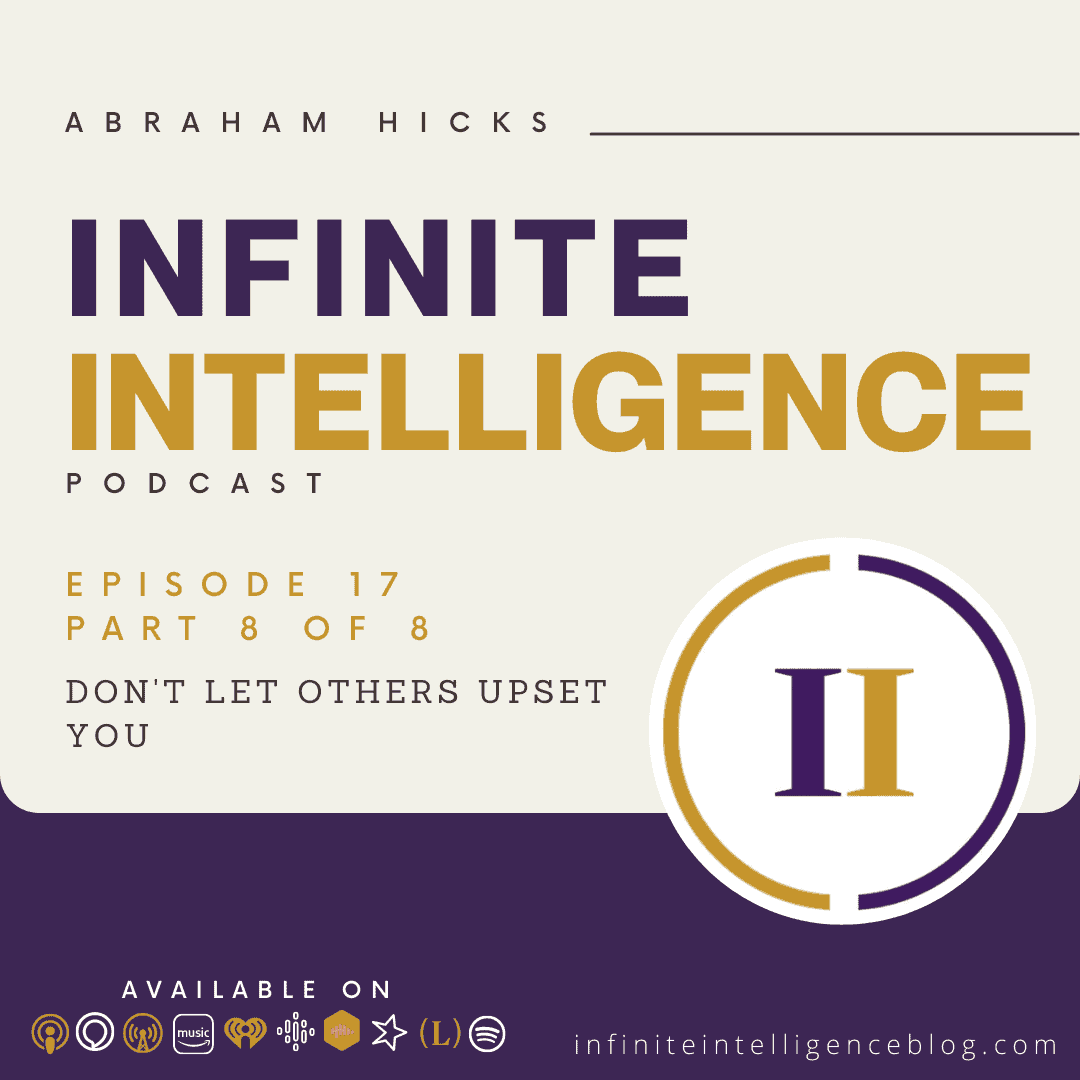 You have to find a thought and maintain it for seventeen seconds. So let’s do that here now, in this environment, it’s a little bit like waking up and being in vibrational alignment. You’ve listened to us. A little bit gave a powerful opening. That is imperfect, vibrational alignment with the source within you, you resonated with a source within you.

Why you light it up for us! It’s why we thought it was a good idea to bring you here fast because you tuned in because we distracted you. Should you got your paper out. We distract, we distracted you from the vibrational frequency, so this is a good environment for you to practice the vibration of what you’re looking for. So it’s like you just awakened, and let’s pretend not such a pretending. Let’s acknowledge, let’s assume that you have just awakened.

You are in that highflying place because there’s been a suspension of momentum while you sleep and now it’s your intention to maintain that vibration alignment. What do you think the best idea is to take the issue that matters more to you than everything else put together and contemplate that now?

Because, if you do it sure, isn’t it that you’re gonna lose your connection, so what we want to convey to you, but we want you to all hear from us if we can convince you that the connection is what matters and solving that problem. Isn’t if you can hear that, because if you can sustain the connection for a little while the problem will evaporate, because in the absence of the vibration of it within you, it can’t continue to be your experience. So have we convinced you that what matters is the alignment that that’s what matters is the alignment?

What matters is the alignment. What matters is the alignment and the subject doesn’t matter now, that’s hard for you to hear. Isn’t it because you been working hard, you told us even working hard. You been trying hard you try hard to get from where you are to where you want to be, and we want you to understand, and we know it must just be so irritating to hear this. You been wasting your time, can’t get there from there the harder you try, the more you practice the vibration of resistance and then the louder you ask, but the the more you practice the vibration of resistance.

When you find someone who is despicable, Esther loves that word. You cause a vibrational variants. So when you separate yourself from you by the logical thing that you’ve chosen that’s a vibration of variants, but if you practice it long enough, then you end up in this sort of habit of vibration. So we been wanting to demonstrate that your point of attraction ian is like a sort of swirling state of being it’s a vibrational disk sort of like the seven dwarves there was honorary well, they called him grumpy, but same difference and happy.

That’s what you find! That’s what your point of attraction yields to you. So we want you to realize that if you will just choose the disk, if you choose the subject, the subject chooses the disc. Think about that. I’m going to think about money, despair, not really, could be optimism or could be fantastic journey. You know where you’re at relative to that, when you think about wanting a relationship that you’ve never known, that that you sense is there that you really want, and you feel lonely or the absence of it loneliness is in a very different place than joy.

So we’re saying this to you more clearly than we’ve ever said it before choose the disc. By the way it feels not by the subject that you want to place on it. That’s a good way of saying that, isn’t it so when we say what are you going to think about your answer, if it’s a really good answer, is anything that keeps me up here? Are you going to think about the things that are important? You know that would take me down here, because the things I really want now.

We know you know we’re playing with you, because we see you progressing and having wonderful lives in many regards. But you know what we’re getting at. Sometimes the things that matter to you most don’t make. You feel that good, because the vibration that you’ve practiced isn’t one of knowing or expecting every subject is like a big, long, stick or little short, stick doesn’t matter, so stick really big long.

So you pick your disc by how you want to feel this morning. Esther was in her sleeping room and she could hear some children and parents moving through the hallway with great volume and her first thought was. They should be quiet. People might be sleeping at our next thought. Was there really having a good time now? Which of those thoughts do you think, was the best thought for Esther to think they’re really having a good time, then dad started singing.

It was awful, the worst voice ever, but he was so joyful and his singing and Esther thought that’s really a beautiful thing. I hope no one ever tells him how bad he is. So she had the potential of going all over the place, but because she’s been practicing that it’s like that’s, where the thoughts now must be, the thought could start out down here, because bad thing is that singing just it just know the difference, don’t you so it hurts.

I started out here, but because she was hear her thoughts just had to join her up here. She just couldn’t stay down there. Not that long ago her vibration would have joined her down there. Now her thought is joining her vibration. Can you feel the difference? That’s step. Four. I’ve sustained high vibration long enough that everything in my universe has to join me where I am, or it’s gonna bounce right off of me. If it’s going to join me, it’s gonna be where I am. I now have creative control of my environment that stuff for help.

So, let’s just start really generally say you have just awakened you’ve heard everything that we said. We know that you’re internalizing it the audiences with you. So what do you want to say now that you’ve awakened this bed is really comfortable? You are brilliant, the that got what else you want to say. The pillows are really comfortable, all four of them yeah. What else I feel great, I feel happy. I feel in tune with my body. More you’ve got it.

Have me sort of bound in a frequency that wasn’t good for me, so I just let it go for a while. I just focused upon the things that my life that felt really good to me and I did it and didn’t didn’t, didn’t, kill more thoughts, joined more our thoughts join you because once you sustain this, even for a little while the manifestations that start flowing are more good feeling emotions, powerful thoughts. Moving into your experience, you begin getting impulses that lead you right where you want to be what Esther is discovering now that she’s there so much of the time is that she’ll give an impulse to do something that formula she thought would not have been a very good idea to do it, but she’ll do it and then something will unfold that, for just a minute, show think.

Oh, I’m not sure if that was a very good idea either, but then that would cause a question to be asked within her. That will bring a solution is to realize. I was just live right down a path from where I am where I want to be because she’s heard to say, and you have to that the source within you knows where you are in relationship with everything you want and knows exactly what the path of least resistance is to get you there, but you gotta try a little bit to be on a vibration of least resistance and, as you start hanging out in a vibration of less and less and less resistance is just gonna amaze, you at first when you realize how smart non physical is, how caring they are about, where you are, how much they know about where you are in relationship to where you want to be, and that this guide you and guide you and guide you and guide you and you know what the best part is: the journey, a cell phone.

Because you know why you’re gone you’re gone for the stimulation you’re going for the life it gives you you’re going for the fun. It’s not the end result, and there is no end result. There is no ending step floors. Gotta tell you that we’ve been hanging around on step, one step, two step three for quite a long time now we’re in step four doesn’t let you know it never ends and there’s a five and six and December we’re about we’re.

Just can’t it’s just more of the same. It’s just more once you get this and you’ve got this once you practice this end, you are once you sustain it and you know how to do it life’s just going to yield to you all of the reasons that you said I’ll go forth into this physical experience. Not one of you said deprive myself in order to really wants something, not one of you. It all go forth into a broken world in a whole patch. It up.

You didn’t say that you said uncle forth and figure out what I want lol line up with it and I’ll feel good, and the wholeness of who I am is going to flow through the specifics of what I’m living and I’m an eternal being- and I mean to make this moment in this one and this woman this in this one all that it can be really good.