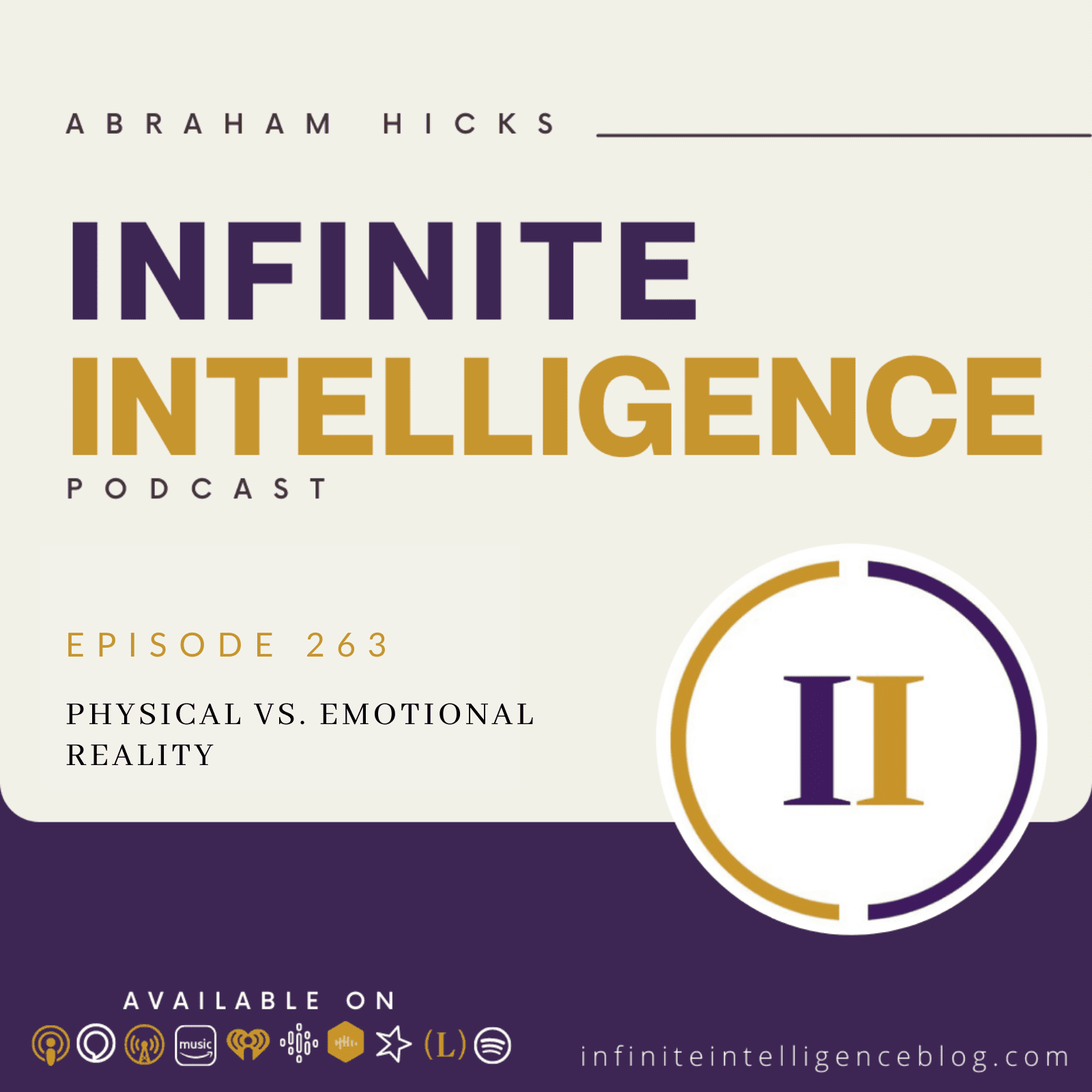 I’ve heard you say many times that you create your emotional reality, and you observe your physical reality. How can there be such a disconnect between the two? If they’re not in alignment, you create your own reality, what you think and how you feel always match and what you think and how you feel and what manifests always matches. Even what manifests in your dream state is a match to what you’ve been thinking and feeling. I’m just suggesting that there are times you observe in your physical reality, things that don’t match with what you’ve created in your emotional reality.

These thoughts turn to things, these desires, just not the things we think they’re going to turn to or necessarily want them to turn, but they turn to the things that really match what’s really in your vortex. That’s why we so often say that you’ve been putting into your vortex rockets of desire incrementally, so much so that there isn’t one of you who could describe with any real definition, what’s in there, because you put it in incrementally and some of it you put there before you even got here into this physical body.

And it’s been growing and becoming and gathering cooperative components under the tutelage of your inner beam, who was also still you. And so your vortex has become something that that’s why when we say it’s going to surprise and delight you. Because it scares the hell out of you too. Well, until you come back into alignment, maybe true. We recently went to North Carolina, and if you know about their bathroom bill, I mean, that was a little worrisome. Thankfully small enough that it wasn’t an issue, but we certainly don’t want him being attacked in the bathroom.

But you see, in the sense of man wearing a dress that, you know, it will be nice when more people come into harmony with who they are. And therefore don’t feel like making a deal out of things that there shouldn’t be a deal made out of you sort of kind of want to do the same thing, in the same way that you’re asking them to understand your difference. We’re asking you to understand their difference because people aren’t being mean, because they want to be mean, it’s always a misunderstanding and talk about a misunderstanding.

And when you see an intolerant person, we wouldn’t say get up your little dummy either. Because in most cases, they are exhibiting what they learned from wherever they came from. And they are doing what they believe is the thing that they should be doing. And they’re not in touch enough with their own guidance system. And as they stand around in anger, they think that changing the world is the only thing that’s going to make that anger go away.

And it’s a nice thing, that there’s not enough change in the world to make that anger go away. They’ve got to come into alignment with who they really are, or that anger cannot go away. So it’s a teachable moment. And we experience the contrast in that regard. And hopefully you have a teachable moment. If the child is asking, you see, here’s something really important for you to hear. Don’t superimpose your prejudices over this new child who doesn’t have them.

Because he doesn’t have to have it as hard as you had it because he was born in a different time with a different vibrational balance. Very true. Very slight differences, it’s very hard to ignore a boy wearing a dress versus a girl being a tomboy. So I think he just stands out a little bit more and draws more attention to himself, making himself more of a target. So fortunately, that really hasn’t happened yet. We still think he’s young enough. When I talk with my friend, you’re anticipating a bit true.

And so you could soften that a little bit. We would soften it by saying the world is a changing place. And he has come forth with Stronger intent than anybody we know. And his inner being is really with him. And we know the most difficult thing ever, for any of you is to have some person who you love, who you feel is being unfairly persecuted. And if you can teach him that what others think or say, does not need to be the basis of his distress, that it is only what he thinks in response to what they think that’s why our whole message today, and every day is about being unconditional, because most people are in a reaction mode all the time.

Can you believe how many millions of people are on the side now of the community that once felt that they had no one on their side, there is no reason to worry about future experience, the only thing that you can do now is find the best feeling thought that you can and as we’ve been listening to you, we can feel your wisdom. And we can feel a strong basis of wisdom coming from your exposure to life. But we can see your vortex and your vortex as clear and wise as you are.

Your vortex contains wonderful things that you are still not letting in because you still feel guarded about the response of others. And that wants quite active vibration within you that has subsided because conditions have changed substantially has now reared its head again. Because now as you say, you’ve got a new little one in your mix that can’t quite get away with it and is so on the leading edge that the world hasn’t yet caught up with him. So if you can stop waiting for the world to catch up with your differences. Esther feels the same way.

There was a time when she was expressing for Abraham What a weird thing this is she made Jerry promise not to tell anyone about it. They remember going to a hotel once and in the early days the caption on their newsletter said Abraham speaks and a hotel man walked up to Jerry and said Are you mister speaks? And Jerry said yes I am.