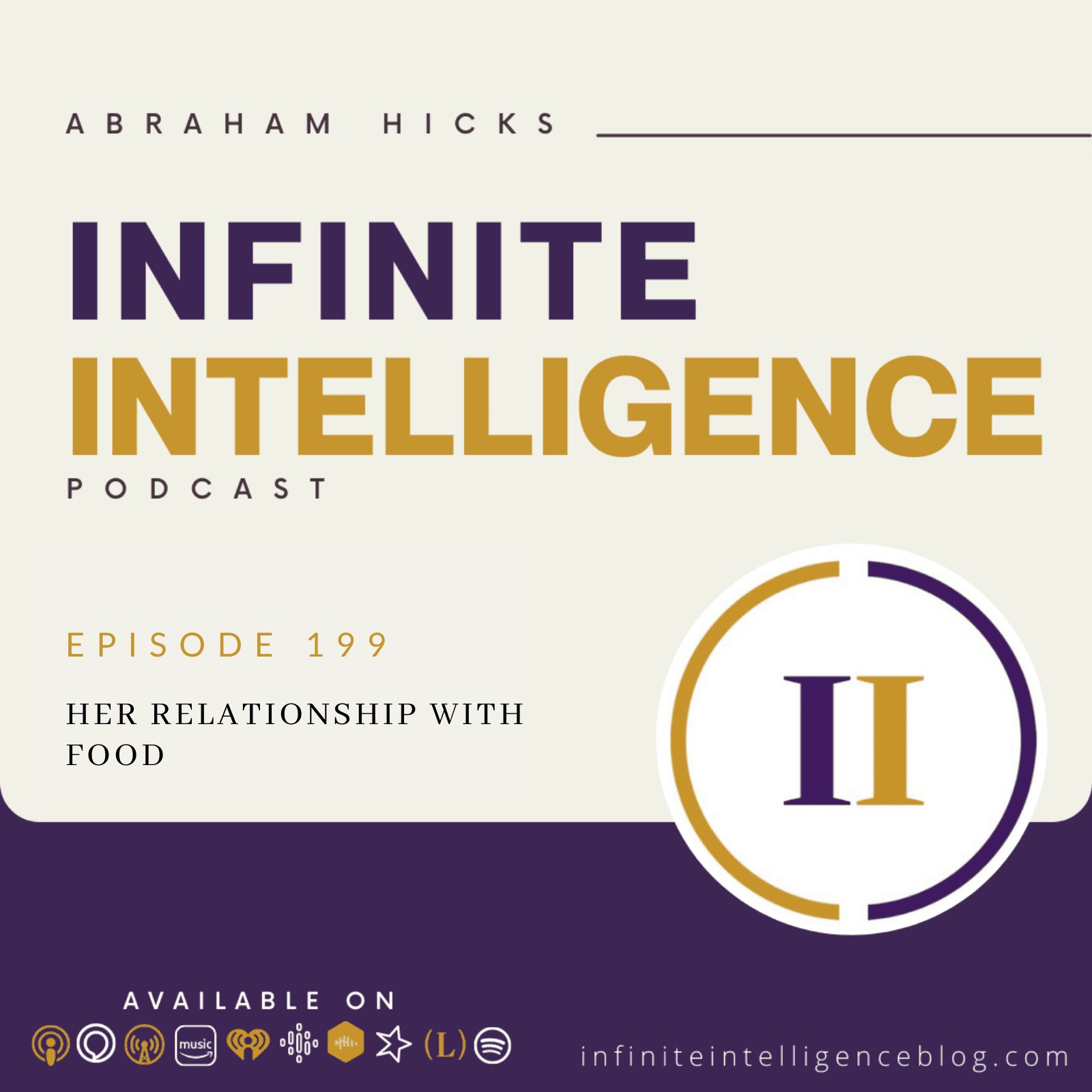 It’s wonderful to be here. Thank you. So I have this inner turmoil feeling on how I can overlay my question on the information that you’ve given us with all the tools. And obviously, I’m here because I don’t get it has to do with understanding my relationship with food. Mostly what happens with most people on this subject is that you want to deal with the manifestation. Before we start this conversation, and we’ll help you come to full clarification on this. But before we start with the specifics of this conversation, we want to demonstrate again, that here is your vibrational reality that we’ve been calling your vortex, and that it is ready for you to be ready for it.

When you get off any subject that is conducive to resistance, like money. And usually food, often relationships, religion, politics, so anything left children, when you get off whatever subject is your hot button issue. You allow your vibration to rise often enough that you are in often sync with that with who you really are and what you really want, then what begins to happen is you begin to receive impulses, impulses that as you follow them feel good impulses that as you follow them, you can just feel the rightness for you in this moment about them.

Not the rightness forevermore perhaps but the right path, the path of least resistance Enos of it. So we want to say bluntly, when you do the vibrational work first, then the inspired action comes. But most people, the last thing that they regard on this topic is vibration. They want to jump right to behavior and action and results. So they’re looking for results, before they’ve accomplished the vibration that can produce the results. That’s why so many different people are doing so many different things and getting so many different results, or so many people are doing very similar things and getting different results is because it’s not about the behavior, you want your behavior to be inspired, not dictated by a process or a book that somebody else is offered, you want it to be inspired.

And so what that usually means is, you’ve got to get off that subject for quite a while before you can hook in to the inspiration. So it’s like, don’t think about the things that really matter to you until you get hooked up. And then you’ll be inspired to think about them in a way that you’ll get the resolution that you want. But the tendency is to think about the things that matter to you. But to practice the thoughts that don’t help. So you keep putting an engine, another engine and another engine, another engine on the end of the train that’s moving in this direction that you don’t want to go.

And then wondering why you’re not getting the manifestations and the actualizations and the materializations and the manifestations that you want. So I’ve lost my focus, or my focus has gone into many different directions, gone into many different directions or gone specifically in a direction that is in opposition to what you want. And it is it’s about confusion. That’s why your opening words were turmoil. Yeah. Let’s say that you’re wanting to have a conversation with someone about diet, whether it’s for fuel, or whether it’s for body shaping, whatever the reason for it is, and it’s somebody that you’ve talked to about it a lot.

Basically, it may be the Congress I created that you need in order to help you to get more determined because we’re talking about focusing our way. In other words, the wonderful conversation that we just had, anything that causes you to focus is a wonderful thing. And it’s so helpful when you realize what it is you’re wanting to focus on. In other words, what is it that you’re focusing myself right now? And what is the reason for the focus? To come into alignment with the vortex period, not to get the manifested results that you want, you often come to a gathering like this, and you say, I want these things to manifest.

Okay, I believe that it is about something else, as you have said, rather than me with my specific relationship with food, because I don’t think that we should go through our life and worry about what we’re eating when we’re eating it. Or, you know, I think it should be for nourishment for enjoyment. And I want to focus on other things, and not have that as a distraction. Well, we hear what you’re saying, but you’re still overthinking it. And what we mean by that is what you like to be so often in harmony with a broader perspective, that you’re feeling impulses, which means no resistance all the time about everything.

And you want it to be all of these things that you’ve been putting incrementally into your vortex. And your vortex has the capacity to yield it to you and is yielding it to you through your path of least resistance. But how often you all we love you so much, get a jerky ride, because you’re down here on these emotional places on the scale. And you’re being called from up here. And so it’s a sort of jerky uncomfortable ride. But you know, those sweet spot moments that we’re talking about, don’t just don’t you know what we’re talking about when you know you’re tuned in, tapped in turned on.

And just for that span of time, everything’s just going your way. And as it’s going your way you can feel the fullness of who you are, you feel invincible, you feel empowered, you feel full of love and appreciation. That’s who you are. That’s how you mean to feel you see. And so we’re just wanting to guide you to that emotional state of being. And then we’re wanting you to follow through with amazing and wonderful impulses and actions and conversations that follow.

And when you do, you’re going to find whole new ways of approaching the world. Somebody got into that place as they found the ideas for the microchip, and the new technology. In other words, all breakthroughs in technology and in wonderful things. It doesn’t matter what the subject is come from somebody being in that inspired state, but almost nobody maintains that state deliberately, that sort of fluke, they don’t even know how they got there. But they have this insight.

And then they wait for another 20 years for more insight as they stumble around focus in here and here and here. If you want to be a master of being in the receiving mode, in the replenishing mode, in the clarity mode, then you got to care about how you feel. And you got to stay off the trying to manifest for a while and let that be your dominant intention and then all the manifestations that come to you. Didn’t you have the experience and don’t you know others that had it too, that once you began to become aware of the law of attraction and the art of allowing and the science of deliberate creation.

Didn’t you notice that, at first, especially all kinds of things that had been sort of missing or sluggish for a while, came into fruition for you? Didn’t you notice that you had a sort of surge of things happening, it felt sort of magical, and then it sort of petered out? Well, the reason is because your vortex is stuffed full of all of those things. And for just a little while you trusted and in your trust you were in the receiving mode, and oh, did you get the evidence before you started overthinking this?

But you also want the exhilarating process of getting to witness the thoughts turning to the things that’s what you’ve all been saying as humans if you’ve been saying, but not understanding what you’re saying, the joy is in the journey. When you say the joy is in the journey, what you really mean is I sifted and sorted through the contrast I put things in my vortex my vortex started up, the law of attraction got hold of it, it became a very strong pelting vibration I got in vibrational alignment with it and then my thoughts turned to things that’s what you meant. That’s what you meant by that.