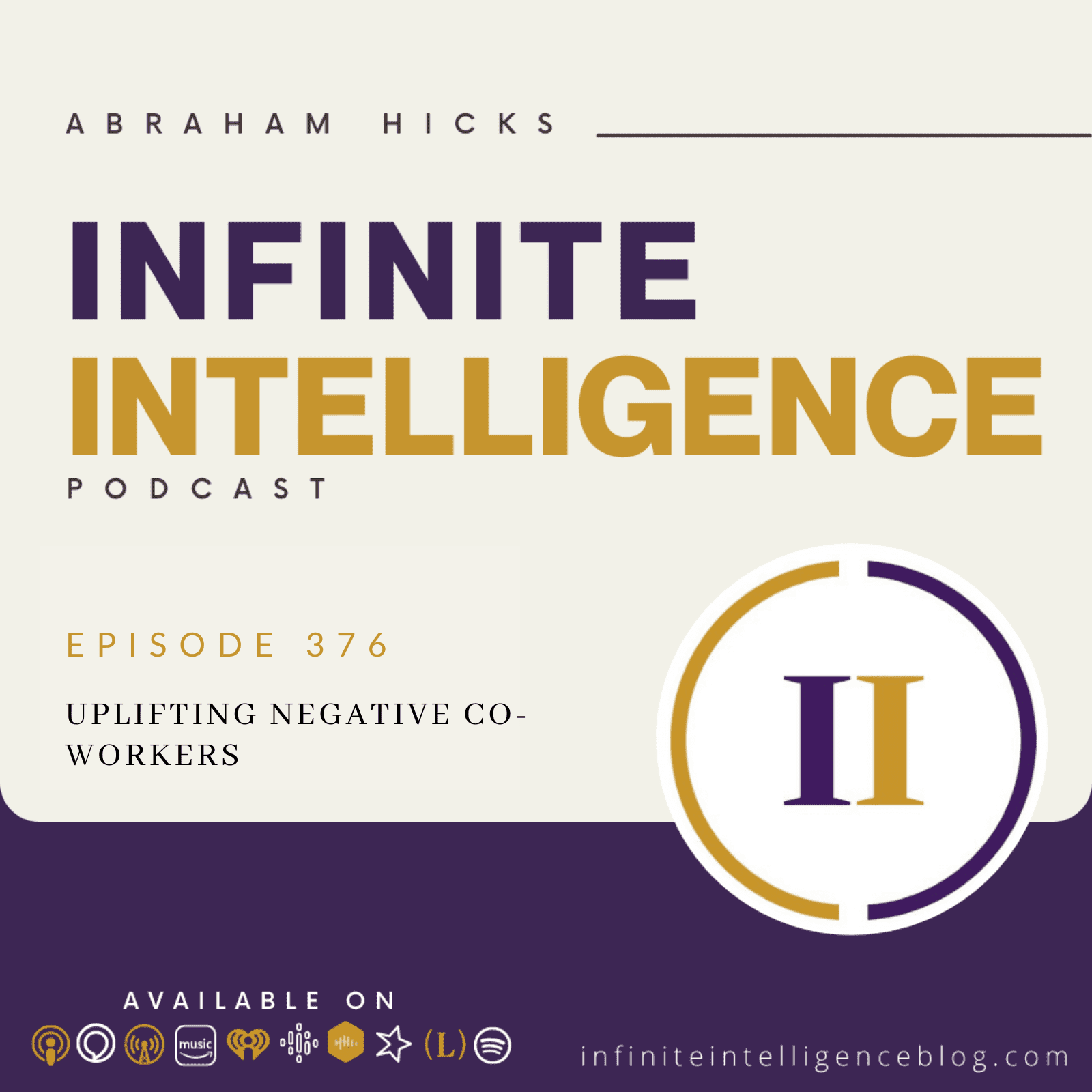 One thing I’ve been noticing in the workplace, I have a lot of individuals who are a little more negative in their current life. And it’s not as a judgment thing, it’s more of an awareness thing. And I’ve been practicing a lot of focus on what you want, don’t allow the negativity in your life to come in, because it can lead you to a downward momentum. And I have a conflict with me where where it’s, do I speak up about positivity, or that’s just going to create more contention with negativity will usually it creates more contention, you just sort of have to teach through the clarity of your example.

Because they will feel criticized, even if you are accurate about what you’re saying, they will still feel criticized. But here’s the law based reason that it doesn’t work very well to speak up, when you see someone who, without knowing it, they’re shooting themselves in the foot and you’re trying to help them out. This is why speaking up under those conditions, doesn’t work very well, when you’re focused upon what you know, they don’t want. And you therefore call their attention more to it. It’s like trying to deal with it through action rather than through energy alignment.

It’s like jumping in with the action, because the words in that case, are like jumping in with the action. So what you would be better to do is to step back from it, take your attention away from it as much as you can. When you do think about them, if you do when you’re not with them, try to find some positive aspect, try to get your energy to flow in a positive way relative to them.

A very simple tool is to take a notebook, and just intend to fill it up one page at a time with positive aspects about your coworkers. So choose the one that’s easiest, not the one that’s most difficult, first, put their name at the top of the page and then just softly focus upon the positive aspects that you feel about them. So that what happens is, now you have cleaned up your vibration, because they are like a contrasting microcosm of reality, one person can be like whole city. So by focusing on this one person and picking out and activating within yourself the positive aspects that you feel.

Now, one time doing that won’t accomplish much. But if you really care about your alignment, and this is someone that you can’t take your attention away from, because you work with them on a regular basis, you have to make a decision and line up with a decision. And the decision that you’ve made is you’re going to see this person through the eyes of source, you’re going to tune in to the way your inner being sees this person, which means you’re going to have to practice that a little bit because that’s not coming natural to you.

Not yet, because there’s so much that is bothering you seeing with your eyes, and reacting to it is more natural than looking deeper. And really knowing what the true essence of them is. In other words, it takes some practice, they almost need to be asleep for you to really be able to do that at times. So now you become someone who is reacting to your own decisions about them not to what they’re displaying. Now you’re someone who is responding to how your inner being feels.

So now you have accomplished through some focus, an expectation about them that they won’t be able to ride over the top of because you have a different point of attraction relative to them. So now, if they are going to interact with you, they will begin showing you more of what you are wanting to see a really good affirmation is today, no matter where I’m going, no matter what I’m doing, no matter who I’m doing it with it is my dominant intent to look for what I’m wanting to see. And once you get that active within you, the best of them will come forward to you other people will be surprised.

Others will try to convince you that your experience with them is really screwy because they’re not like that with other people. And you will be able to show yourself how powerful your actual point of attraction is. And here’s maybe the most satisfying part of this for most people. If you really do clean up your vibration about them and find harmony with the way the Source within you sees them. So that really is the dominant vibration within you. But it’s not the dominant vibration that they’re displaying. Law of Attraction will put you over here and then over there. That’s Harmony. Harmony, isn’t you convincing them to go this way with you? Harmony isn’t you decided to go that way with them.

Harmony is you harmonizing with the Source within you. And sometimes law of attraction says this is you and this is them. But it won’t come to this place where you have to effect some departure that will be the next logical step because they will not be able to buck your current. It’s also true that some Time’s if you’re not practiced, if you’ve done a little of step three, but not much of it, and you’re really not yet a master of step four, sometimes you won’t be able to buck the current of what they’re showing.

They’re just so obnoxious and so oblivious and so unkind and just spewing it and spewing it and spewing it and spewing it. And since you’re just an observer, rather than a free thinker, you’re observing and observing, and every time you observe it, you harmonize with that vibration, you may just go with them, when you don’t mean to vibration, I noticed that sometimes there’s so much contrast that I will almost constantly pick it up. And because I’ll be passive, more of, I don’t want to start creating any contention by speaking positivity against negativity and having that dissension, here’s the most important part of this conversation.

Don’t wait until it’s happening, and then try to do something that fixes it. Because action is really weak in comparison with energy flowing. So it’s what you do in advance, that makes the difference, you got to get out ahead of it. You can’t wait till it’s flowing. And then in some last ditch effort, say something brilliant and clever, that changes at all, it just doesn’t happen. You have to begin flowing the energy differently.

So you might say things to yourself, such as well, I don’t really know where that person is coming from, or I don’t really understand what the basis of their disconnection is. And I don’t need to, there’s a big difference between being empathetic and being Oh, that’s such a powerful word, because what that means is, you’re observing and getting hold of the vibration, and now you’re emanating that vibration, and now you’re in the vibration.

And so what compassion means is being in the receptive mode, no matter what, so then you’re free to look wherever you want to look, because the looking doesn’t run the risk of your vibration dipping. That’s what true compassion is. And that’s what true mastery of alignment is. And what that requires is just wanting so much to feel good that you’re willing to do whatever it takes to feel good, which means not even observing the obvious things that make you feel bad.

And there are some people that say, Oh, well, that’s not very objective, or you mean, you want us to put our head in the sand and just not notice. And we say, if you understand law of attraction as it is, and if you understand that whatever is active in you, no matter how it got, there, doesn’t matter why what’s active in you is active within you. If you focus on someone that makes you feel uncomfortable, then the reason you feel uncomfortable is because you joined that person in their vibration and left your inner being and their vibration. Oh, isn’t that an important thing to know, you wouldn’t want to say it to this person.

I’m going to feel your happiness, even when you’re not living it. I’m going to practice the version of you that I know that you want to live and that I want you to live until it’s my version and then you won’t be able to get me. So it’s kind of like a preemptive strike. It’s pre paving. It’s like this. So you decide that you’re going to have breakfast and you’re going to toast some bread. So you get out the bread. You take it out of the wrapper and you get up a toaster and you put it right there and you put the slices of bread in the toaster and you push the button down, but you don’t plug the toaster in.

What’s so compelling about you that I don’t do what matters most in the whole world to me to do. It’s just habit, its habit of being physically focused, its habit of letting what you see and hear and smell and taste and touch be dominant. Its habit of feeling negative emotion, and not being nice enough to yourself to do something about it. We’re talking about everybody, not just do if been so conditional in life, that you think when you change, I’ll feel better. And until you change, I won’t feel better.

So you need to change so that I will feel better. And you know, that’s the thing that makes most people resent you or resist you. They don’t think it’s any of your business and they don’t think they need to change because from where they stand, they’re doing just fine. And sometimes the more you need them to change your children, the more they will defy anything that you ask them to do, because they still innately know that it’s not their job to feather your nest with their good behavior.