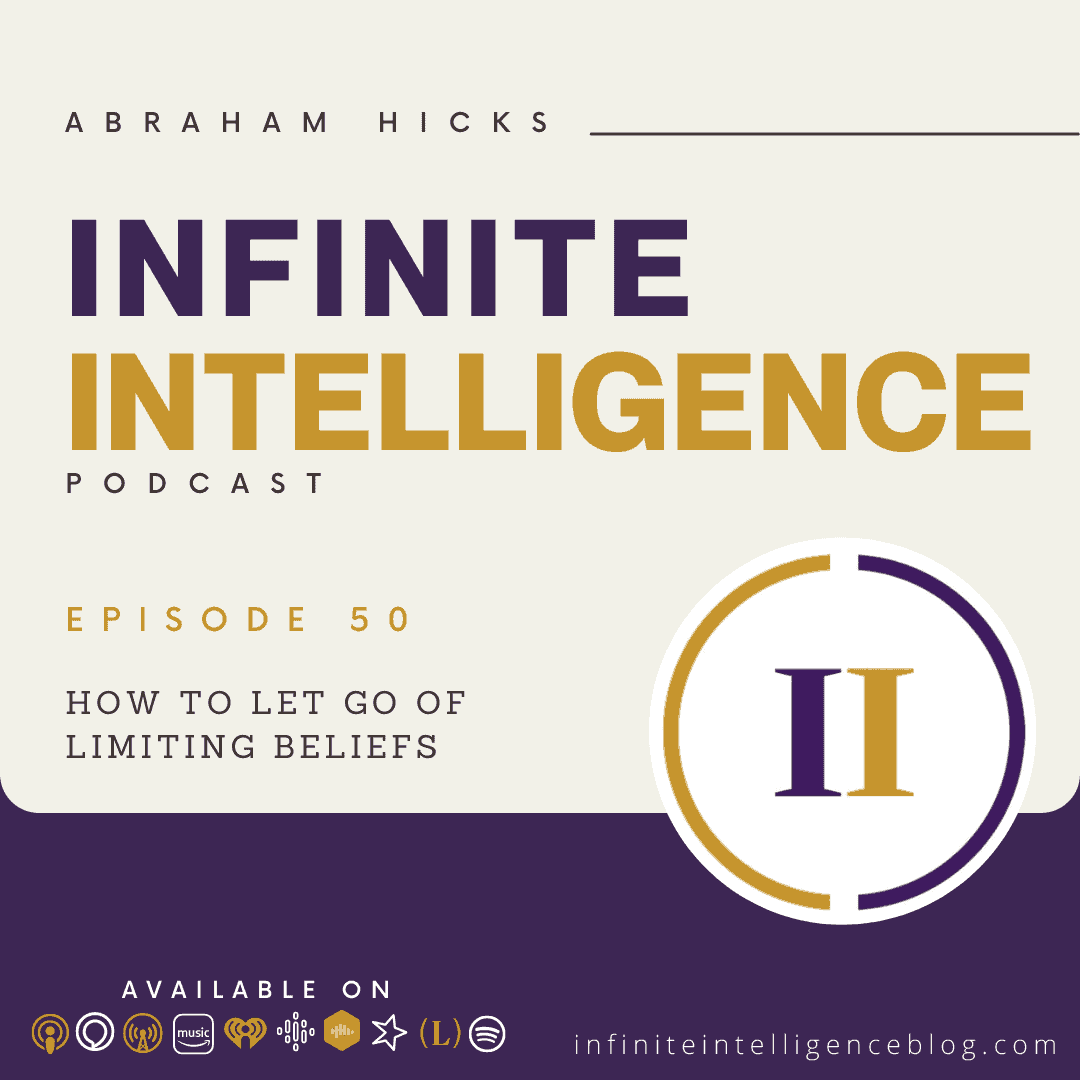 Infinite Intelligence Episode #50 – How to Let Go of Limiting Beliefs

So when you have a belief that opposes your desire, your desire cannot be realized by you. Your belief is holding you out of the receptive mode. So you continue to say, it’s not coming. And that’s true, because you can’t see it no one else can. It’s true in the physical manifested sense, but it’s not true. In the vibrational sense, it’s not true in the what happens before it becomes vibrationally seen by you since. And that’s the thing that we want to make you aware of.

And so in the short of it, when you feel negative emotion about something that you want, you don’t believe as your inner being believes and your belief about the thing you want is keeping you from being in the receptive mode, where you can’t see it, you can’t get the clues, you can’t follow the trail. You can’t follow the path. It’s not coming to you not anytime soon, you say.

You get in it. So, a few days ago, Esther is at her makeup table getting dressed, putting her face on, as she says, Oh ye of little faith. She has everything spread out and she has a loose powder that’s in a container. It’s quite large. The black container has a black lid on and the lid screws and reveals the powder puff and the powder. So Esther is ready for it and she picks up her powder, but it’s only an empty lid. And she thinks what happened to the powder.

Where is it? She looks all around her table. Now our table is this big. This big. She looks everywhere on the table. What happened to my powder. So she goes in rifled through suitcase. Maybe it came apart in the suitcase, which is dreading because that means there’s going to be a mess in there. Maybe I left it in San Diego at the last hotel, trying to rationalize why it isn’t where it should be. So then we inspired her to make her bed to hang up her clothes to put her shoes on. And then she went back to finish putting her face on.

And she looked down and there was the powder right next to the lid was right there wasn’t more than three inches away. But her belief that it was in the container that it was all within was so strong, that she could not see it where it really was. And if it hadn’t happened to her, she would not know with the fervor that she knows it. How her own belief about something can keep her from seeing something that’s right before her.

They had moved, she turned the house upside down, she opened every box, she dumped out all of her purses, she looked everywhere. And she decided that that pin was really lost. And then about a month later, she was looking for something else, a perfume sprayer, as she’s reaching around, going through the same process, looking for something else, and came out with the pin, the pin that was in that bag all along, that she had searched through more than once, wanting so much to find it, but believing that was lost.

It’s about coming into awareness of the laws of the universe, and most important about your guidance system and what it tells you so that you can be more often in the receptive mode. So just gonna tell you a very fast beginning here. So you’ve sifted through the contrast, and you’ve launched rockets of desire, many of them so many, you cannot even count them. And some of them you would recognize because you remember the day that you asked for it.

But many of them have matured into something even more than the pieces that you put there. In other words, you have a vibrational reality that you have created. This is the life that you’ve lived. And even before you came into this physical body that in many cases is not recognizable to you in the detail that it holds. So since you can’t see it yet, you can’t know it with your physical senses, you have to feel your way to it. which simply means when you’re feeling happy, you’re not blocking anything that’s there.

So that’s what we talk about year after year, all day, every day, is what we talk about in various ways to assist you in discovering for yourself. Why you can’t see the damn powder. Why am I blocked it from my ability to realize that it’s there? And you do those kinds of obvious things all the time, don’t you? Haven’t you looked and looked and looked for something and there it is right there. Esther always blamed Jerry for that.