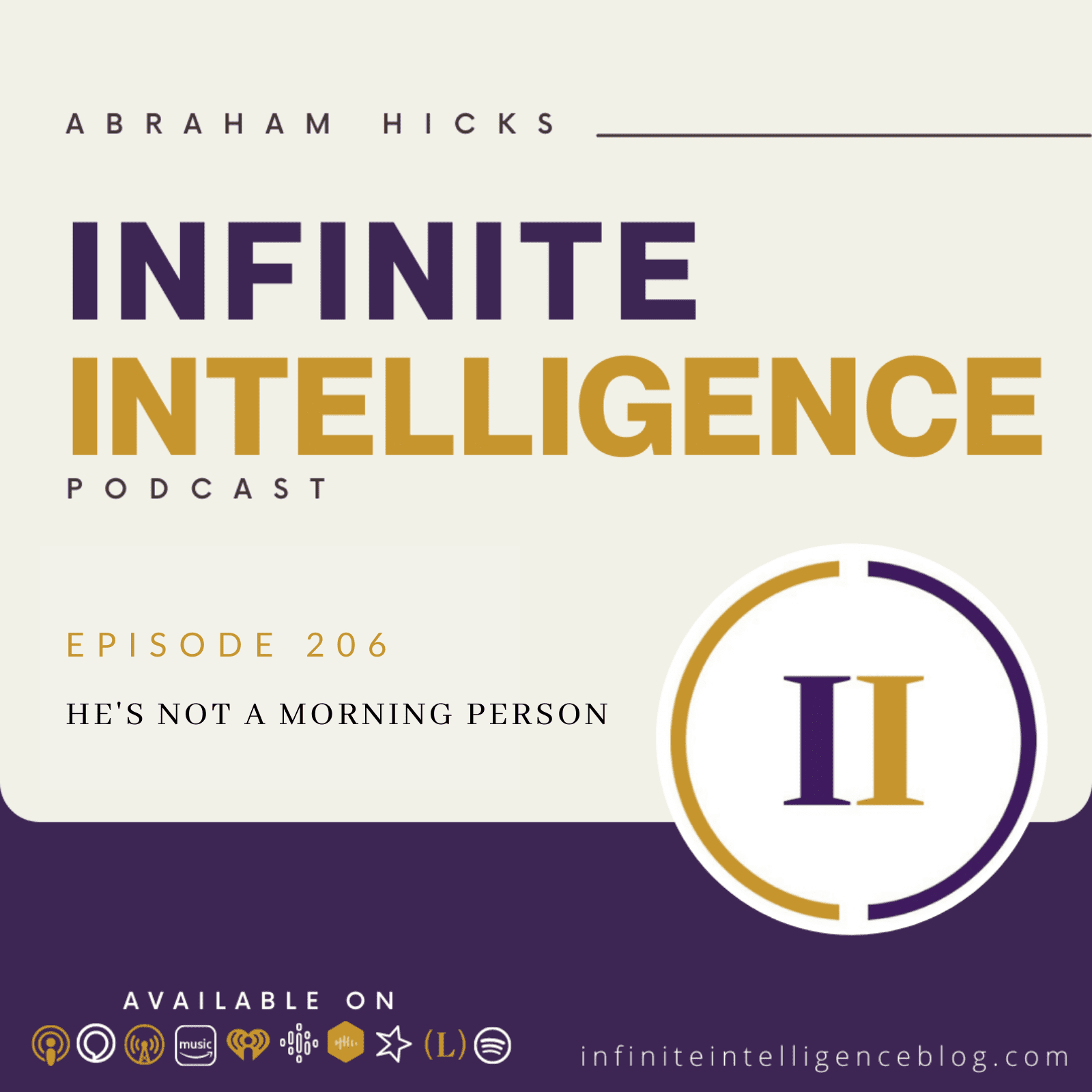 I have another question about the morning, during the day, I’m able to keep myself high and in really good place really good place some time incredibly good place for days. But my challenge is, is in the morning, it’s like the first, our first couple hours. It’s it’s so low, it’s so it’s like, it’s just it’s a challenge for me it has, well, there’s something about that, that we want to help you clarify, because that’s vibrationally off from the way we know the laws of the universe to be for this reason.

When you go to sleep, it’s like meditation is like death. When you go to sleep, your point of focus ceases, which means any resistance that you have subsides, which means any momentum, any negative momentum subsides. So when you awaken, you are at your highest probability of hooking up with your inner being. And you’re saying that that doesn’t happen. It’s a challenge for me to I want to wake up expecting the new day and expecting beautiful things to come and just being excited about the day, well doesn’t what’s happening, you see what we said to you just now about how you are a strong focuser.

So you’re focusing yourself into alignment, it is sort of almost, let’s just call him a manual for lack of a better word is a determination to focus and that determination to focus. When you wake up, you haven’t been focusing because you’ve been sleeping. And so for some reason, there’s a belief within you that you’ve got to get focused before you get any momentum going.

But this conversation will help you because we want you to understand that when you awaken after sleeping with no resistance, that since you’re not holding your cork under the water, it’s going to Bob right back to the surface, expect that lie in your bed for just a moment and say to yourself, momentum should cook in any moment, because I have not been doing anything to thwart the momentum, and then just softly focus upon something, we think that’s what’s happening to you is that through the day, you’re using such deliberate intent to stay focused in a positive way.

And so it’s that deliberate intent that’s carrying you rather than your knowledge that it’s natural. So this statement is going to help you a lot you have been believing and it is incorrect. You have been believing that if you don’t diligently hold your mind in a positive direction that it will go negative. And that isn’t true. Of course, it’s better to hold your mind in a positive direction. But when you slumber, now you’re not holding your mind in any direction. So when you wake up, you are without expectation that you are where you want to be. That makes perfect sense to you, doesn’t it?

So trust us when we say to you, when you wake up, your cork is bobbing right back up to the vibrational surface, right in that pure positive energy place. But it’s gonna take a little bit of focus to get those energies moving again. Helpful. It is helpful for me it’s It feels like my default is not feeling good. I mean, I tell my friends that well to feel good is that it’s hard to work almost. But it isn’t hard work your default. Oh, let’s explore that for a moment. Your default is the beliefs you’ve been focusing upon.

Your thoughts are right where you last left them. And so that’s why it’s nice to be tuned in in that compassionate place where you can review things and leave them in a different place. Do you believe that you have an inner being? Yeah. Do you believe that your inner being is in a pure positive energy place? Yes. You’ve already told us that you know that you can hook up with your inner being. Do you think you have to work to hook up to your inner being? Yes. And yet when you meditate? What are you doing? The cork? Aren’t you quiet in your mind when you meditate? Yeah.

And aren’t you quiet in your mind when you sleep? Yes. So why when you meditate? Does your cork rise in your note and why when you sleep? It’s different. That’s not logical, is it? No. So there’s something about the belief process about sleep that is different for you than the meditation process. Have you been criticized for sleeping? Do you see sleep as the wrong thing to do or the lazy thing to do? I don’t think so. Actually, I There are periods in my time that I just use sleep I am in a place where I just need to get my vibration to the right place. You tell us when we meditate you quiet resistance. Yeah. When you sleep you’re quiet resistance. When you come out of meditation.

Wait, that’s not right. All these engines become idle, the pulling against you engines become idle, your engines of desire are still moving in the direction of your desire, because law of attraction is responding to your inner being who’s tending to those, you’d like knowing that. So when you wake up, they’re not going to give you whiplash as they jerk you out of bed. But it is more likely that you’re going to move in that direction than this direction after you slumber.

So when you awaken, just expect that that is the direction that you’re moving. And then especially first thing in the morning, pay attention to your thoughts, because you might get some of this going, too. But your best opportunity for getting momentum going in the direction of what you’re wanting is when you first wake up. And so we think that all you’ve been feeling is the difference between being really focused and moving well and then going to sleep and having it all be slower. That was really good. Perfect. Thank you enough.