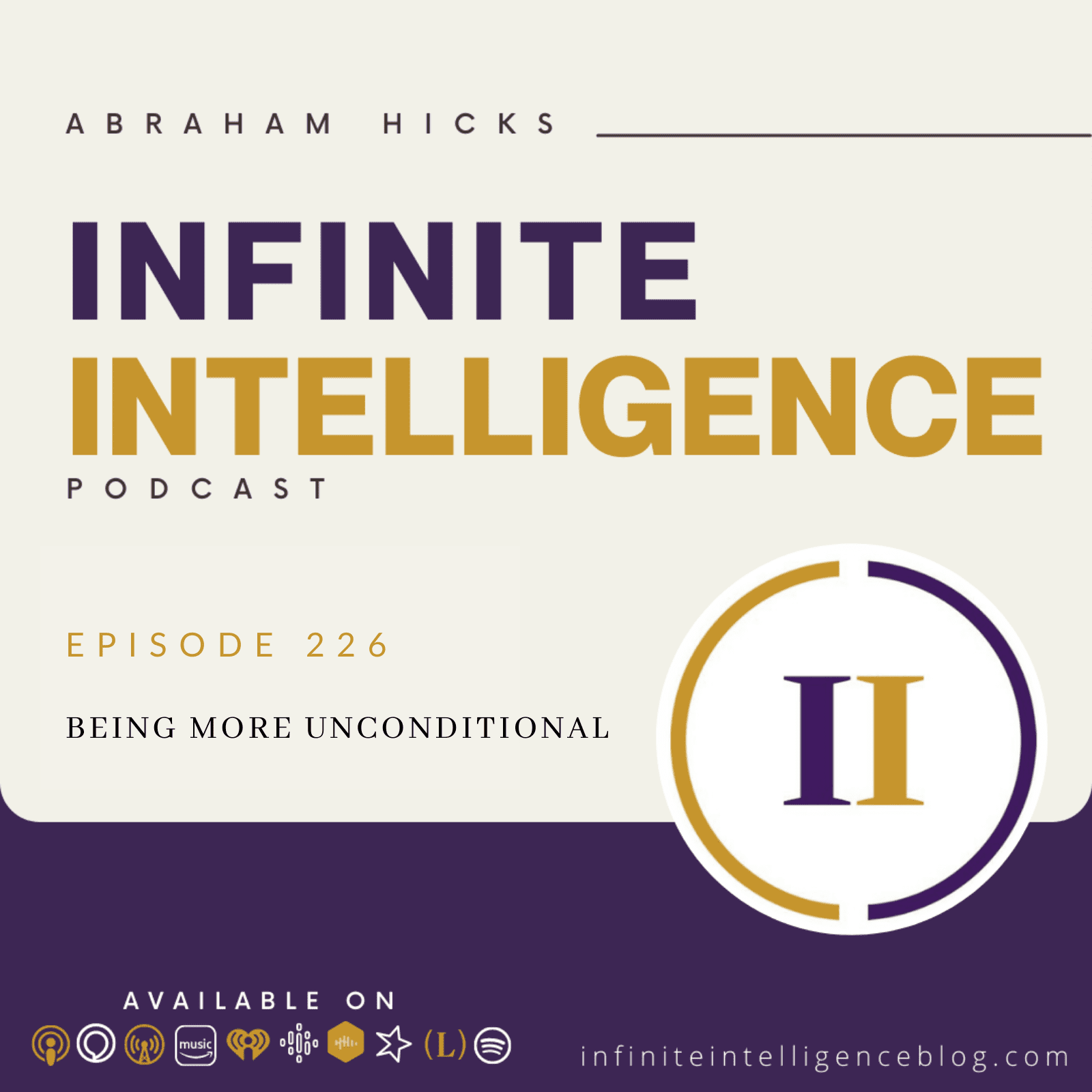 Well, the only other thing I was wondering about is, and I think I’ve sort of got an answer. But I noticed that I’m not as unconditional, as unconditionally aligned as I’d like to be. And I am affected sometimes by other people, if there’s some negativity, it affects me. And I dip. And so say that in a different way, I’m focused in a world of variety. And sometimes, by my observation, I focus for a long enough period of time, that my guidance system, lets me know that I’m taking a little bit of a vibrational dip. Always an advantage in that, because there’s always a clarification that comes from it.

But my intention is to catch it in the earlier subtle stages, so that I have more control over how I feel within the conditions. Because we’re speaking for you, I don’t want to withdraw from situations in order to maintain vibration, I want to learn to maintain vibration in all situation, right? Otherwise, you’re running them hiding from situations or from people or from subjects. And then your world gets smaller and narrower, rather than broader and more expanded. You don’t want to train yourself to a sensitivity, that means run and hide, you want to train yourself to a sensitivity, that means a line, a line, there isn’t anything that your inner being doesn’t have the ability to look at and stay in alignment about.

And the same is true of you. And so the way I’m going to do that is something’s going to be said that affects me. And I’m going to find something that about the same subject, maybe, but by then there’s enough momentum that has taken place, that it’s unlikely that you’re going to do anything about solving it in the moment, you’re probably just going to take a vibrational hit on it. In other words, you’re going to feel the emotion and whatever is underway, will undoubtedly continue to be underway.

But the good news is, and your first subject of conversation with us here today, is solving that. The good news is you slumber often enough that there is no momentum that ever needs to get going in a strong enough fashion that it ever needs to be much of a hindrance to you. But what happens to most, because they don’t take that slumber as a clarification moment, they don’t see it as a clearing of energy. Instead, they wake up and they pick up on those subjects right where they left off on them. We want to say this in a way that is absolutely accurate with the laws of the universe.

What do you do about negative momentum? What do you do when you have a negative emotion, which means there’s negative momentum, which means the engines have been added to the unwanted end of the train and you’re beginning to move in that direction? What do you do about unwanted momentum? Simple question. Do you encourage it? Or do you discourage it? Do you increase it? Or do you decrease it? You continue to give it your attention? Or do you take your attention from it. So when you first get up in the morning, there’s not any attention that has been on anything.

Now the first attention you give to something is going to give you a subtle awareness of what you’re doing with your momentum, and which direction your memorandum is going? Is it in the direction of your desire or against your desire? Is it allowing or is it resisting? So if you have been meditating frequently, if you’ve been basking often, if you’ve been in the state of appreciation, often, then you’re going to catch you’re going to become aware of negative momentum in early subtle stages. And when you deal with it in early subtle stages, it turns out to be nothing.

And the more momentum that has gathered, then the greater the difference in the way source has seen it. Because when you get rolling, and flowing and blowing on something unwanted, you distance yourself vibrationally from source, you can tune into source and that at the same time. Yes, yes. So, you want to talk through something you want to make it more than a theoretical observation of someone who never feels negative emotion?

No, it’s just in conversation, you know, somebody will say something that’s a little negative. And I feel it and I pushed against it, instead of changing my conditional. Let’s talk about that. Because when you feel like you want to push against it, it means you don’t want the momentum to get going. Yes, it means love it right now. But I’m pushing. It’s all right. It’s natural. So we have some words we’re going to throw to you. And you let us know which ones feel stronger. Which ones feel more negative, which ones feel less negative? Since we are talking about resistance, when someone introduces something into the conversation.

If what you’re meaning by this, that it feels personal to you like it could negatively affect you right away? Does that hurt you when you hear it? Is that a sore spot with you? Is it something that is offensive to you? Or throwing a lot of questions at you all at once? Because we want to stress them? Is it something that you’ve asked them not ever to say? And now they’re saying it? Are you afraid of it? Are you afraid the momentum will sweep over and take you over I do feel guarded and fearful? Yeah, I guess I don’t feel solid enough in my unconditional pneus that any little negative thing is going to wobble me and so that’s why I’m trying to push it away.

But we want you to stop fearing contrast, this matters a lot. Being afraid of contrast, makes you afraid of life. Being afraid of contrast, makes you not accepting why you’re here in this environment where contrast exists. We want you to laugh about contrast, and be interested about contrast, and allow yourself to have conversations about variety in order to help you decide what you want. So when friends were having lunch, in several cities, and in the last city, there was a very interesting man who was there escort around the city, he was leading them from place to place.

And he opened some conversations that Esther found really fascinating. She really wanted to go further with him. But they were somewhat of a very general political nature. He was talking about things around the world, not pinpointing anything. But Esther felt like he was taking their political temperature just a little bit. And Esther was fascinated to watch how carefully he maneuvered as to not get anything going in a direction where there would be offence taken, but wanted to say enough to find out who these very interesting people were. And Esther wanted to find out who this very interesting person was, as well. You say, there’s a big world full of lots of thinkers that have knowledge that will expand your knowledge, and further the combination of what they know.

And the combination of what you know, is the best of all of the worlds you say. So when you acknowledge that what others think and what they believe and even what they do is not a threat to you, not whatsoever, because you’re able to know by the way you feel whether it poses a threat to your vibrational stability or not. And that really is the way you are entertaining this conversation. In other words, you talk about how it makes you wobble a little bit and you don’t want it to be a threat to your own stability. We just want you to know it cannot be certainly not at this stage of your vibrational conscious, deliberate evolution. So why not just enjoy differences?

You see if you’re not somebody who is running around trying to change mine. But instead, you’re someone who’s looking for opportunity to blend your mind in a more interesting, more expensive, more valuable way, then you could find value, not just interest, but value in every conversation with every single person on every single subject, because no one can think for you. And when you let them speak for themselves, that’s not a threat to you. That’s a gift to you. Because it helps you decide and define who you are and what you prefer. Just like looking through beautiful shops or through beautiful gardens or through beautiful buildings. Oh, the stimulation has been magnificent.

On this voyage, hasn’t it? Of course, they were all beautiful. Oh, second, they were all beautiful. In the examples you just said, you know, beautiful buildings, beautiful gardens, beautiful. Oh, there were streets with trash in them. There was garbage everywhere. There were some streets where you held your nose when you walked on them. There was some food that didn’t taste as good as some other food. There was some service that was excellent, some service that was slow. You’ve had variety all along the way, all along the way. But out of it, you’ve had mostly an expensive experience. yester said, Oh, I just love this stimulation. I’ve seen things that I’ve known about.