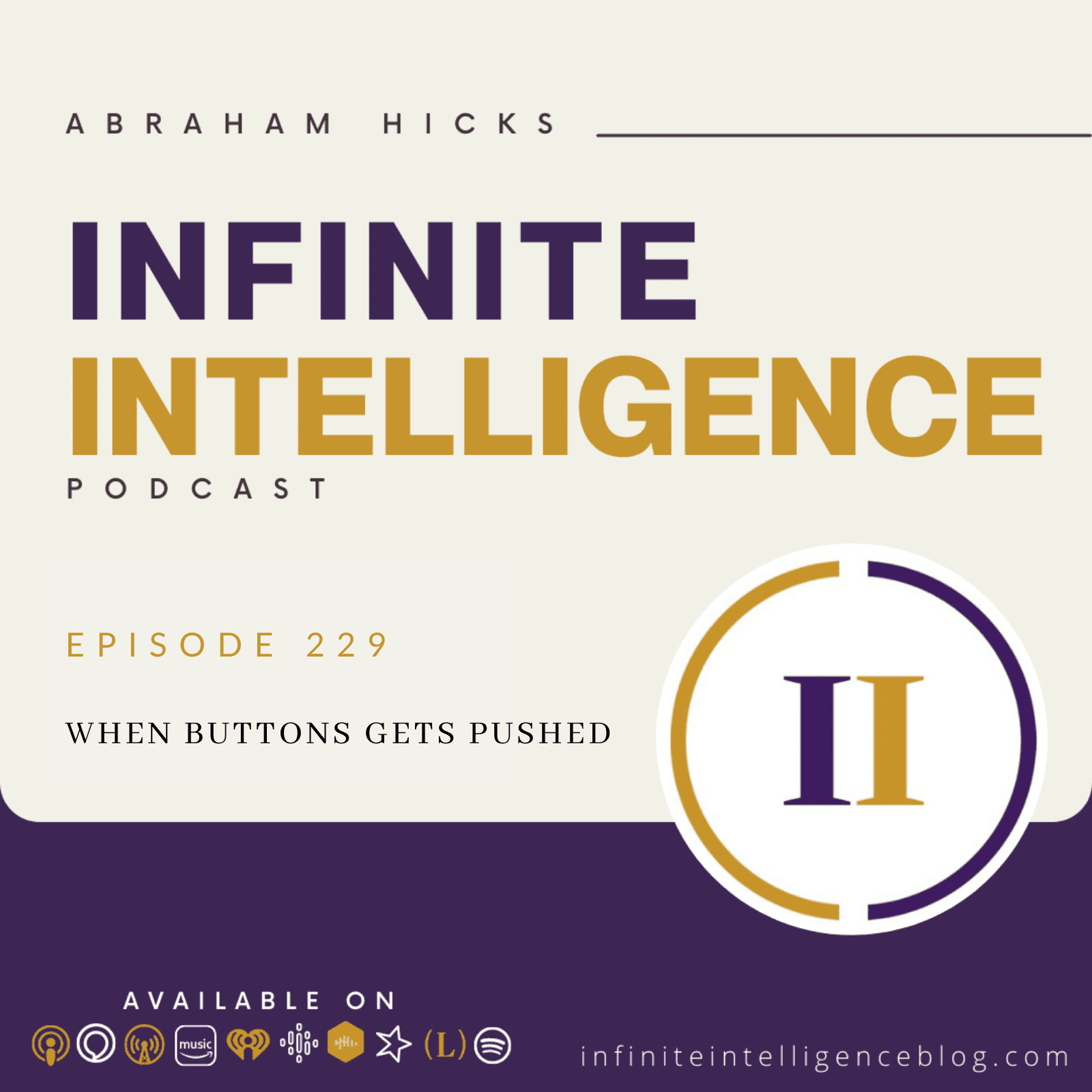 Abraham, you have helped so much in my life. And I just wanted to thank Esther, and Jerry and Peter, and Lee, and Julie and all of your, the team that brings us together. These are just wonderful, wonderful experiences. Thank you so much. We are all in this together. And we are all in this together. And this is a wonderful venue. I agree this is the greatest cruise. So my question is the difference between detachment and releasing resistance, that where I’m going with this is that I have certain buttons that get pushed, I see something that, you know, upsets me a little bit.

And do you believe that if the button was pushed often enough, you’d stop being bothered by it? I would hope so. I would hope so not not so much. I’m sorry, what turns out that isn’t the way it works. The more you push the buttons that bother you, while you’re being bothered by them, the more momentum you get about them, and the more sensitive to them you are. So are there any radio stations that you don’t care to listen to? Yes. Do you listen to them until they go away?

And for me detachment, here’s the way we apply it, if we were standing in your physical shoes, if there was a strong probability that we could detach from the subject, in other words, if we could remove our focus from it, in other words, we don’t live with this person, or we don’t live near this problem. If we could live a reasonable amount of our life, say 60, or 70, or 80% 8580 90% of it, if we can live 90%, we can live 90% of our day to day experiences without focusing on it, if it was just a matter of turning off the television, and therefore it never touched us, then we would say that that form of detachment would be beneficial, wouldn’t you.

You just can’t work the bugs out of all of that, nor do you need to. And usually in the process, you get more momentum going toward more of what you don’t want. And so it usually doesn’t work out very well. So use your own judgment, those subjects that you don’t need to think about don’t. And those subjects that come up a lot that bother you find a way of looking at them in a way that feels better to you rich, the beliefs, bridge your own beliefs about it, say to yourself, things like we just said to our friend just a moment ago, this isn’t something that really needs to affect me.

This is not personal to me. This is not my point of attraction, Esther said, and really meant it. I’m not going to pick any more fights with anybody about anything, and I’m not going to fight back. And then every now and again, something comes up that she feels like fighting back about. That’s just not right. That’s not what I plan. That’s not what I want. I don’t really like that. And as soon as she picks the fight, she doesn’t like having picked the fight. And she knows that it could have been a different way. The last thing that we’re asking you to do is to look at unwanted things and pretend like you like them.

So if you’re detached from it, they’re not active things in your vibration. So law of attraction is not going to match you up with anything that you’re detached from. But then something comes along and suddenly, it flares up, it’s active again. Now Law of Attraction is going to match you up with that. And so don’t try to be so precise in the way that you live life, that you’re wanting to run away and hide and detach yourself from things just make a decision, a sort of overall blanket decision that goes like this, I have the ability to focus myself into a better feeling place no matter what, I have the ability in time, maybe not right now this red hot minute, but I have the ability sometime today or sometime within the next hour to find vibrational align with my inner being, or I can change the subject altogether, and find alignment with my inner being, and then go back and address that subject.

And see if my inner being has a different point of view about that subject. There are all kinds of ways to do this, just see, the only thing that we would not do if we were standing in your physical shoes, is feel a grudge and keep it going. We just wouldn’t let hot buttons that come up all the time, remain hot, because that is the slow, gradual, but steady eroding of your alignment. And that’s what makes you stop liking life. It’s what makes you not have fun anymore. It’s what causes you to wonder why you’re born, and all other levels of depression. It’s not big things.

It’s not big, catastrophic, things that are negative that upset you. It’s that steady eroding that you do to yourself by focusing on things that bother you. And by either not detaching if you can, or bridging the way you feel about it. Really important conversation. Thank you so much. It’s like step five, you talk about step five. And I want to go back to something that we just said, because we can feel something going on. And we want to make sure that we have been clear about this, we don’t mean go into therapy and get to the bottom of anything, because there is no bottom, you will not get to the bottom, you will just keep momentum going.

We mean, if you’ve decided that you can’t detach from it, because it comes up too often. We mean, Bridgette by making the statement that feels better about it, not looking for the trouble that caused it, making the statement about it that feels better looking for your empowerment within it. So for example, our friend who was just talking about sometimes people say things Esther was that way she didn’t for a while after Jerry made his transition. She just didn’t want people talking about stuff like that. And everywhere she went, that’s what they wanted to talk about the first movie, she went with her sisters to a movie. And they said, What should we see.

And it’s not the easiest thing in the world to find something that feels better about something that doesn’t feel so good. But when you do, oh, the clarity that comes from finding that improved, that’s what you’re all looking for. That’s the expansion that you’re all looking for. Anyway, let us make a very strong and powerful, most important statement that we’ve ever made to anyone. The thing that is most important, oh, we can say this better, the thing that you like most about being in these physical bodies is your expansion. And nothing is more exhilarating, than to move into a new place where resistance exists, and then move through that resistance into the pure expansion.

Did you hear that? In other words, the resistance is necessary for the expansion, but to move through the resistance into the expanded place. That’s the ecstasy that you’re all about. You see, that’s what it’s all about. And most people are choosing something quite different. Most people are saying, well, I’ll just go and hide because I don’t want any of this. And then they feel stuck in the mud. They don’t feel any expansion and then they feel dull, they feel tired, they feel bored. They’re not loving life, and they think the only alternative is to detach from it altogether and just sort of shut it down in time or to feel bad and we say no, there is another alternative.

You can become who you really are by choosing a subject that takes you there and do that often. After that’s the steady place where you hang out. And then in time, you can regard any subject and stay there. And that’s the compassion that your source lives. That’s how your inner being lives. That’s what you want. You came for expansion, which you can’t have without contrast, and you don’t like the resistance. It’s in contrast, and you can’t have it both ways. You got to accept the contrast. Because you’ve got to accept your reason for B, you’ve got to accept the contrast.