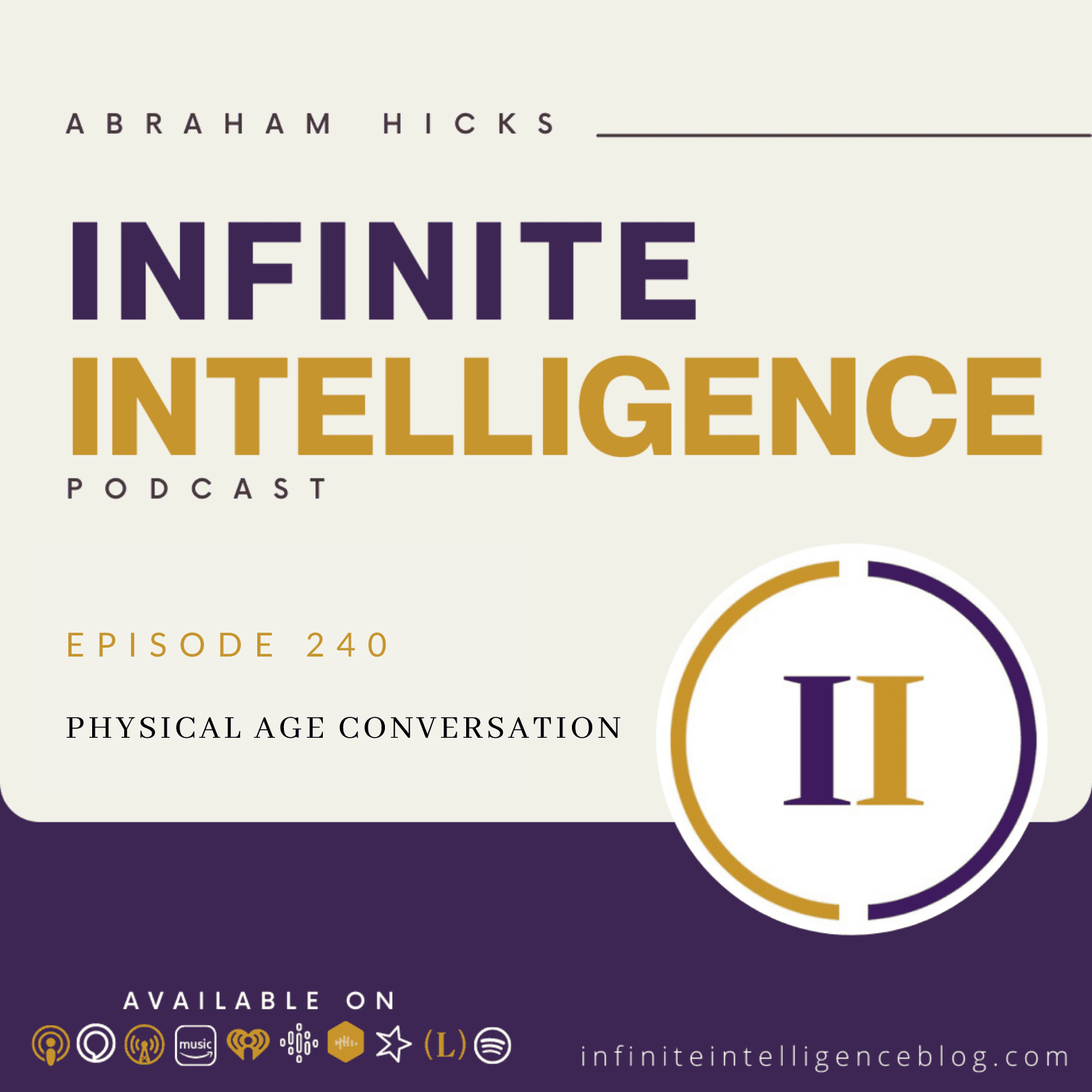 And are you refreshed? Good. Now what? You know, we have talked about everything possible. And that whatever it is that you’re wanting to know about, you already know about. Yes. So now it’s just for the fun of it. Yeah. Don’t get to settle down, it’s not going to be that long. We Hello darlings of the universe, I want to talk about the age of the physical body.

And that’s come up on this trip, because how old are you? How old? Are you? How old? Are you? And I play back? Hello, do you think I am? How old do you think I say old enough. Old enough. And also I’ve heard on this trip, that Abraham makes everyone look a lot younger than their physical body actually is. And so except with me and a few of the others, which I don’t mind, because I feel I’m materially higher than the physical age that I am. So a few of us have had our ages have risen, the majority of the room has had their ages brought down now is the a average age of we want to address this fully.

Because while you’re being serious about it, and everyone’s being a little bit playful about it, this is a topic that as we come to some resolution about it can be of enormous value to you. Because, well, let’s start with the reason that people are talking about age to begin with. So it isn’t really fair of us to ask you all to come here into your physical bodies, and be born into all of this contrast, and not be comparative in nature.

In other words, most of the consideration that most humans have about age is not that helpful. Esther was having a conversation with herself about the subject a while back as she was enjoying so many of the young people in her life, her own grandchildren, the children of people who work with her children of friends. So she’s been around a lot of them lately.

And she is especially enjoying what humans want to call youthfulness that Esther wants to call alignment as sort of not really caring, they are more carefree, the younger they are, the more carefree they seem to be. And so she had had a few days of being with several of them. And she was enjoying their light approach to life, how they don’t seem to want to get heavy into anything. And they roll their eyes at their parents who are wanting to worry about this or wanting to worry about that, especially as it has to do with them. And so Esther was sort of taking all of that in.

And then she began making comments to people who are around her about how really jealous she was of these young kids in the sense of how much more time they still have in their bodies. Just little pangs of that because Esther is having as much fun as they are. And the idea that they get to have more fun. And so she was talking to us about it, knowing that she was getting wonky in her vibration about it, knowing that she was off about it.

And so we took the example of her grandchildren, and we said you know, all that any of you have is right now. Now, that’s a phrase that you’ve heard so often that it’s a cliche to you, it doesn’t really mean that much to you, but we want you to know what we mean. Because in this now, which is all any of you have, you have the opportunity of being in alignment with the whole of you or not, which means of being fully alive or not. Well, if you could really feel what we mean when we say that you would not be concerned about how much life had come before or about how much life in this physical body was coming out. After, you would only be aware of your excellent utilization of this moment in time, as it revolves around your alignment to who you really are.

And it sort of evens the playing field, it makes you all ageless. It makes you all now ours. It’s now How old are you now? Now you don’t understand how old are you now? But how many years have you live? Now? They would lock you up, they would think you were sort of incapable of communicating. But we want that to be your answer. Now, how many years have you live? Now? How long do you think you’re gonna live now? Because how long this now lasts is not relevant. It’s how this now feels that is irrelevant.

So And the interesting thing about it is how this now feels, has everything to do with how long this now lasts. In your joyful now, when you have full infusion when you are fully in the receptive mode. And something else that is really significant to this conversation. Anytime that you are foolish enough to get trapped in a conversation of how old are you or how old you think I am, you are just setting yourself up to find out how in the now any of them are.

Because anyone who’s talking about those kinds of things is not fully integrated with their inner being who is timeless. That’s just not a question that you ever ask in full connection to your source energy. You might be asking, how much fun are you having? Or how much do you love that? Or how much is your interest about this? But there is never a limiting question ever been inspired by your inner beam? Don’t you like knowing that? Sounds so easy? It is yes. So are we not quiet? Yeah. Did you like it? Do you believe it? Do you know it? Yes, definitely. And at the same time, people are saying to me, because I have been introduced to Abraham, at such a young age.

They then say to me, they’re comparing themselves to me, because I found Abraham at a younger age than what they did. I don’t I don’t actually know engage with them about that. In other words, because the most you can do is make them feel bad. Well, they’re making themselves feel bad. Let’s take this question broader. What do you do? When someone wants to engage with you in a conversation, we sort of brushed on this earlier, that doesn’t feel good to you, and that you really do not believe will ultimately feel good to them?

So you give us their dialogue or their questions. And we’ll give you what your inner being would say to them under those conditions to think what I could have done if I had found Abraham at your age. Well, here we are standing here together, and I don’t see myself doing anything much more significant than you are. So aren’t we kind of even in that regard? Yeah, that’s it. And I believe that I, I believe it’s sort of like so imagine a really powerful muscle car, one of those really beautiful, powerful engines designed for quick speed and great speed. And it has been around for a while.

It was birthed a few months ago, and it has about 40,000 50,000 miles on it. And it’s burned a lot of fuel. But the question in the moment of someone who’s enjoying it is not how much fuel has been burned through this engine. The question that would be asked is, What is the capability of this engine right now? Let me hear the sound of the engine. Let me feel the sound of the engine. Let me get behind the wheel of this vehicle. Let me feel what it is you see what we’re getting at the comparison about anything other than how you are utilizing your power right now?

How much torque do you have right now, which has to do with how in alignment with source you are right now? What is your capacity for pleasure right now, which is what is your alignment? And we’re all in alignment with each other. So there is that sense of equality. And otherwise, we all wouldn’t, we’re all here now brings equality to all now because everyone stands in the now you all have the same 24 hours in this day, you all have access to source energy which you are utilizing to various degrees, it could not be more fair.

And then anybody can do whatever they want with the circumstances of their choosing to focus on to pinch themselves off from the now or not. And that’s what has happens sometimes as people move through time is they use their age as their excuse to pinch themselves off from energy and alignment and clarity that would be there otherwise, it’s not about how much time you’ve moved through. It’s about what you are doing with the time that you are living now, in this moment. Yeah. Enough Yes, really?