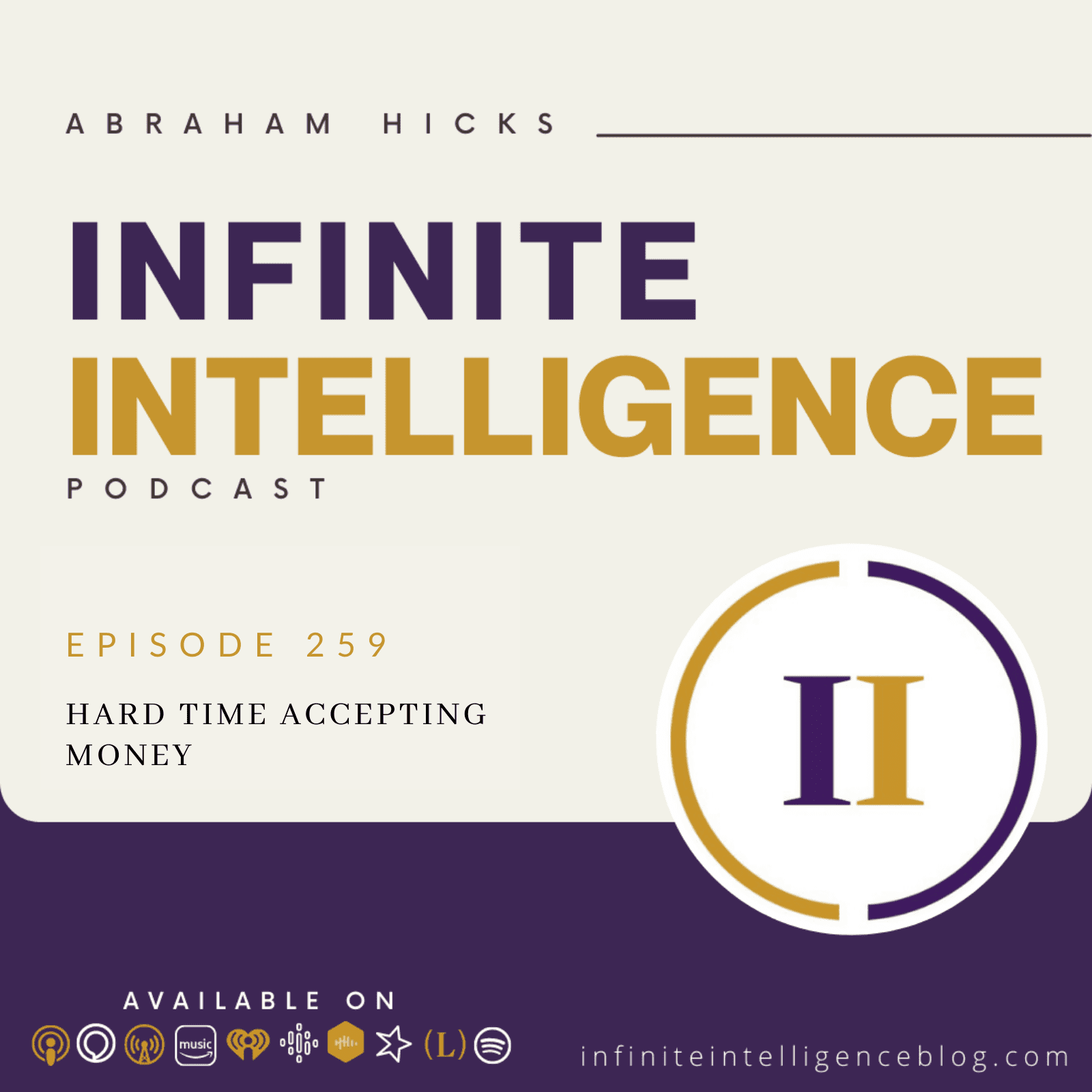 Something more. Yeah, I have one more question. And you introduced it when you said you get your money’s worth. I feel very worthy, I am a good person. And it’s not that I don’t feel self worth. But I have a hard time accepting money from people for things that I feel were given to me that I didn’t pay for. I know I’m the one being resistant.

Okay, so there’s so much to talk about relative to this. One of the practical points of view around that is that Jerry and Esther when they first began this work, they met us in 1985. And estimate, Jerry promised that he wouldn’t tell anyone because she just thought it was weird. And he kept his promise for a short while. And then things sort of got out of hand.

And so they sat with us, Jerry, asking the questions, wanting to know what to do about that. Because, first of all, there’s a lot involved in moving from place to place and getting things the way you want them. But also, they wanted to know, what was an appropriate amount to ask for. And we said to them, it doesn’t need to be this way. But in your economic world, it is this way.

Because Abraham says the same thing over and over again. The laws of the universe don’t change clever ways of explaining it to you do. And as your experience evolves, then we do get broader and deeper, but really, and so it’s not so much. If you are looking at it the way we were helping them to see it, it’s not so much about what’s happening to you, it’s about what’s happening to them, what is most likely to put most people in the place of receiving the most that they can receive.

And so Jerry is always very fair minded, he wanted to make sure that it was equal opportunity to anyone who wanted to come, he didn’t ever want anybody to save any seats for anyone they didn’t want there ever to be any advantages over one. And we explained to him on many occasions that the law of attraction is always fair. In other words, as you look out into the world, you often see things that do not appear to be even. But Law of Attraction is always fair.

Meaning that whatever it is you’re offering is always coming back to you. And so we don’t think that this is a subject of worthiness so much as it is a subject of it’s easy to respond to how others are feeling, someone may want very much something that you have to offer, and not right now have whatever it is that you are asking for, for them to give you in exchange for it. But if you then say to them, well, therefore, it will be a different price for you, or therefore there will be no price for you.

There’s another message that you’re giving to them, which says, I do for you what I see you cannot do for yourself, which is a message of disempowerment that is not in alignment with what your inner being knows to be. So what we encourage you to do is to feel around until you find something that sits well with you, which means your inner being is resonating with it, and then don’t listen too much to the others.

Esther gets letters every day that say to her, you know you charge less than anybody else doing this kind of work. And Esther says, I’m fine with this. And Esther gets letters from people that say, you know, you charge so much that I can’t come. There are so many people that have so many opinions about each and everything that you will ever do that if you get yourself all twirled up in trying to be the path of least resistance for them.

Then you’ll get your eye off your ball and you will forget who you are and then you’ll have stress in your vibration and your point of attraction will be negatively impacted. And so Oh, I get that weird. So total teasing yesterday we said we think you should call Facebook nose book because you’ve become a world that sort of has your nose in what’s going on with everyone and it doesn’t serve you unless you’re really solid in your alignment, because it’s really easy to let whatever it is that you’re giving your attention to be the reason that you’re offering the vibration that you’re offering, and then your point of attraction is affected by default.

Helpful. Wonderful. Can I tell you one best story? Okay, so I didn’t have the money to come here. Really? No, no kidding. And you came in to my phone. I listened to a meditation you popped on my phone. I was like, oh, Abraham, someone gave me your CD years ago, probably right after you first started and said, you might be interested in this. And I listen, if it was right after we first started, it was a cassette CD.

Oh, yeah. It might have been a cassette, actually. It could have been a cassette. And they said, you might really enjoy this, you know? Well, I listen in the attraction thing. And you know, well, I lost it. Okay. Many years later, now, two months ago, I’m listening to my meditation, I go to put it in, in your in YouTube. And I’m like, oh, there’s that Abraham.

So I started to listen. Do you know that you could have sat in a day on YouTube and receive more information that you will ever receive in a day like this? And it will cost you nothing? Yes. And do you know that you spoke to every issue I’m telling you like? What I’m saying is that you came to me, what you’re saying is, I was in a vibrational place where I attracted to you exactly what I was asking for. Because I was in a state of non resistance. And so it happened instantaneously.

I showed up in a room with hundreds of people and first crack out of the box. I was called forward for the same reason. Yes. The money thing. So the money thing, I did not have the money to come. I was like, I’m going to see Esther, I saw that you were coming. Like, I don’t know where I’m gonna get the money, but I’m going to see her. I’m gonna see Abraham. I just can’t wait. Power. Indecision isn’t there, I made a decision that I was going I didn’t know where the money’s gonna come from. But I didn’t care. I’m telling my cousin’s about. We were on a walk and a bath.

And I’m telling her about Abraham and low vibration, high vibration, I’m explaining some of the things that I learned. As I’m saying it, I looked down I said, Oh, wait a minute. What’s it I walk back? And under some leaves, there is an earring. I go, Oh, my gosh, look at this an earring. So I started to scrape and I go, wow, that looks like it could be a diamond. And she looked at and she goes I was probably a CZ, you know? I said yeah. But wouldn’t it be funny that if this was a diamond, this would be a demonstration of exactly what I’m telling you. It was a real diamond worth $9,000.

So what I was so excited about was not so much the money. But I was aligned. It was like, This is what I’ve been asking for and my truest desire is to be aligned with that. Of what you have been teaching us that inner source which and if we were to stop talking right now, and you were to only hear that story forevermore, that would be all you would ever need to know about her.