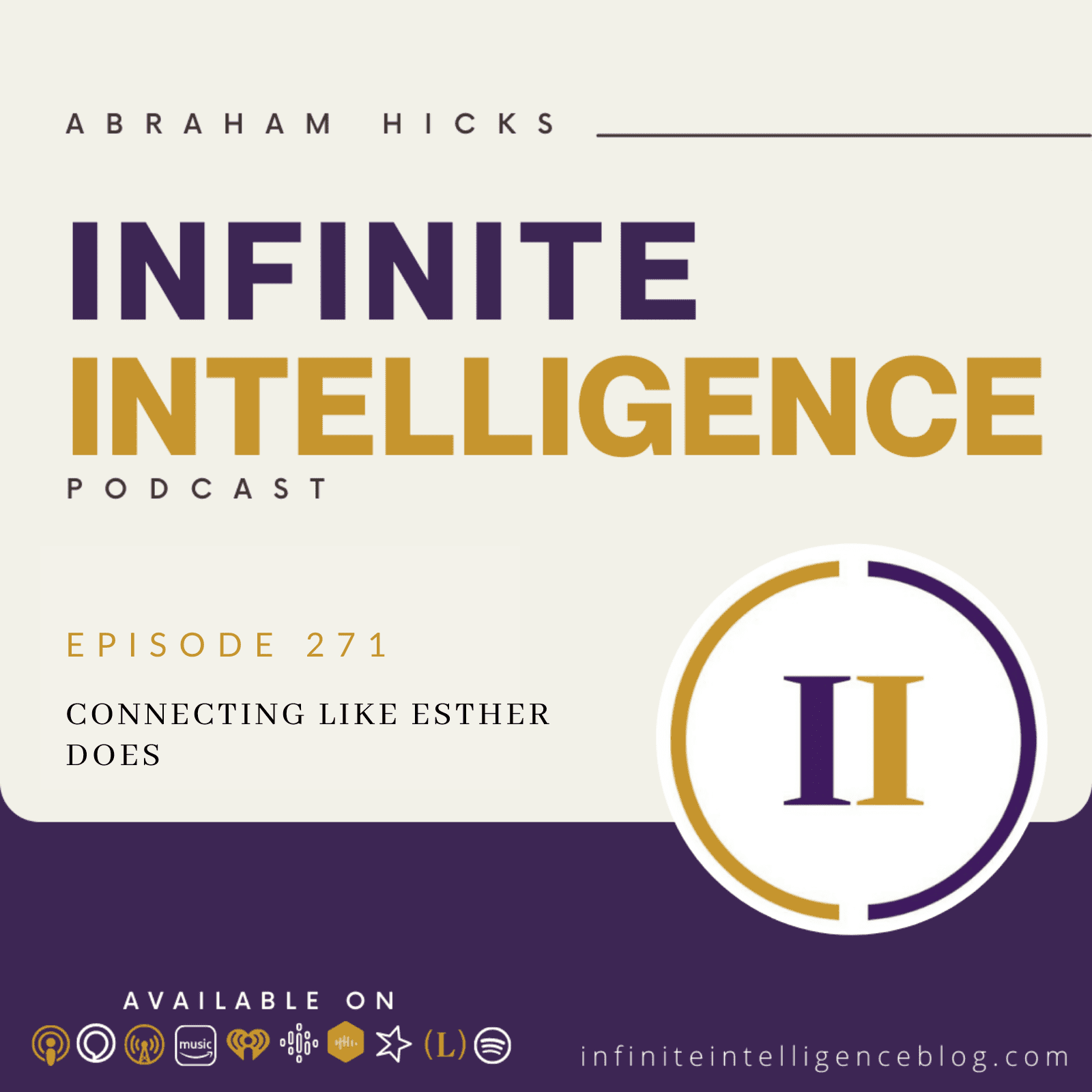 And I know often you’re telling stories about how Abraham told Esther something, is she going into a state like this? When Jerry was around, she would discuss her whatever with Jerry, and they would turn on a recorder and Jerry would present it as best he could to us. And then we would speak to him in the recorder, and then Esther would listen back. And that was a satisfying way of sort of CO creating with Jerry. These days.

Esther takes her laptop and types her question from her conscious Esther, awake, aware state. And then she relaxes gets into what you would describe as a soft meditative state and takes dictation from us. And you did a we do your iPad back here. So we write the answers back to her and she does it every day. Okay, so what’s the difference between discussing the question with Abraham as to Esther’s inner being? Or is that the same thing? Well, Esther’s inner being is a component of the larger group of consciousness that we are calling Abraham. Consciousness is a stream, not a clump.

So you might think of Esther’s inner being is one of the clumps that’s in the bigger clump, that is the stream of Abraham, but and I do understand that because I’ve asked this question a different way before of I am ready now, in this moment to go to that level where you say you I know I create my own reality I can be do or have whatever I want, where you’re saying, you can connect to those do create worlds, those people who have come before all, you know, Abraham, Esther, don’t have to make a pronouncement and say, I am now ready and then wait for it to descend on you.

Although that willingness and readiness and a willingness is a good state of being to be in because that allows it to happen. And you are more likely to be aware that it’s happening as that is happening. But we really want you to feel with us that where you stand, we’re putting you here and out here is this cone of consciousness that’s all focused and flowing to you, that is aware of you and knowing of you and thinking about you and focused with you.

And all of that is happening, whether you pronounced yourself ready for it or not. It doesn’t start happening because you asked for it, because you’ve already asked for it in so many different ways. But by making the statement as you just did, that helps your readiness, provided the statement isn’t lateral based. No, it’s because we know it isn’t. But if you’re saying I’m ready, because you’re in this needy place, then even though it will continue to flow as it was even before you put it into words, your acknowledgement that you want something that hasn’t been happening might keep you from being in the receiving mode. The last conversation we had was about focus.

And you made a huge distinction for me, because you always say, oh, it just takes focus. And I used to think it was focused on what I’m wanting, but you’re saying no focus on your alignment and focus on your feeling and focus on being aware of your motion, I’m gonna focus on your connection. Focus on plugging in the toaster before you try to toast the bread. The first time I was ever in the hot seat was the story Esther told about when she went to the DMV with her vision.

And I’m like, if she can do that, what could I do if I had that same focus to have that in my hands, that we have it in my mind? It’s not a question, but I’m often distracted by menial other things that I’m like if this is so important, and you have I have to believe it, here’s the thing that we would like you to settle into just for a day or two or three or 10. Magic happens in the menial things too. And just the labeling of it being menial, sort of takes the magic away from it. And so if you’ve just acknowledged that source is involved with you in everything, in the early days, when Jerry and Esther were consciously aware that we were flowing to and through Esther, we encourage them to utilize us in any way they could think of.

And there is no preservatives of any kind and any of the food that we put into the basket, not because we give a rip, whether they preserve us or not. But because we want them to know that we know what we’re doing. We want them to know that we don’t have to read the label to know what’s in the food. And so then a whole series of things one night, we suggested that they tell their friends who were at that time, the only two of about five people that knew about Abraham to go hide somewhere in the city of Phoenix.

You all have so much attention and interest upon who you are, who you are right now and where you are in the relationship between where you are and where you want to be. And so it’s just a matter of you choosing something that matters to you. But the selection is it matters enough that you’re interested in will do it but not so much that you’ll shoot yourself in your foot without, you have to sort of find that balance.

This is something that I want to experience that when it happens, it will give me enough exhilaration to let me know, there will be a condition that happens that will maybe cause some momentum. But it isn’t something that’s so far out that my doubt will keep it from coming about now. And so life can be so sweet for you as you just allow the universe to demonstrate to you these things, how important you are, how brilliant you are, how worthy you are, how in alignment or not you are, don’t you really want to get actively connected to your own guidance.

And the way you do it is just by deciding to do some of these things and let your inner being guide you to it. We would encourage all of you to play a game. Make a list of four or five things as long as you want but four or five is enough of something that you would be interested in seeing that you aren’t worried about not seeing. Esther and friends made a list of 20 things and then they got in a car and roamed around and within about four hours.

Everything on the list had shown itself to them in some sort of remarkable way. It’s a really fun game to play, but It has to be something that you care about and not something that you’re worried about. And watch how responsive the universe is to you. Esther has no inside track on non physical energies, you all have access to all of this, you say, it’s just a matter of asking and meaning it and then getting into the receptive mode. And then doing that enough that you believe in your ability to do it.

Esther has never doubted right from the beginning, that when she stands up that podium and relaxes her consciousness that Abraham will come forth, she has never worried about it, because it has never failed her. And it won’t fail you either. But your ability to recognize it will get better and better and better. You say? I was just going to say I think we all wish we could just sit at the computer, write the question, get the answer and just type it out. And I think we can do that.

And we would say she’s not quite right. Esther is on the leading edge and we are following. We’re all in this together, you say but when Esther has something that’s really bothering her, and she’ll sit and she’ll write the scenario about it. And then even though she relaxes and gets into the receptive mode, she’s still not really in the place that she can hear every subtle nuance that we would like to give her and so we speak to her, but you got to remember, she’s the translator of what we’re saying.