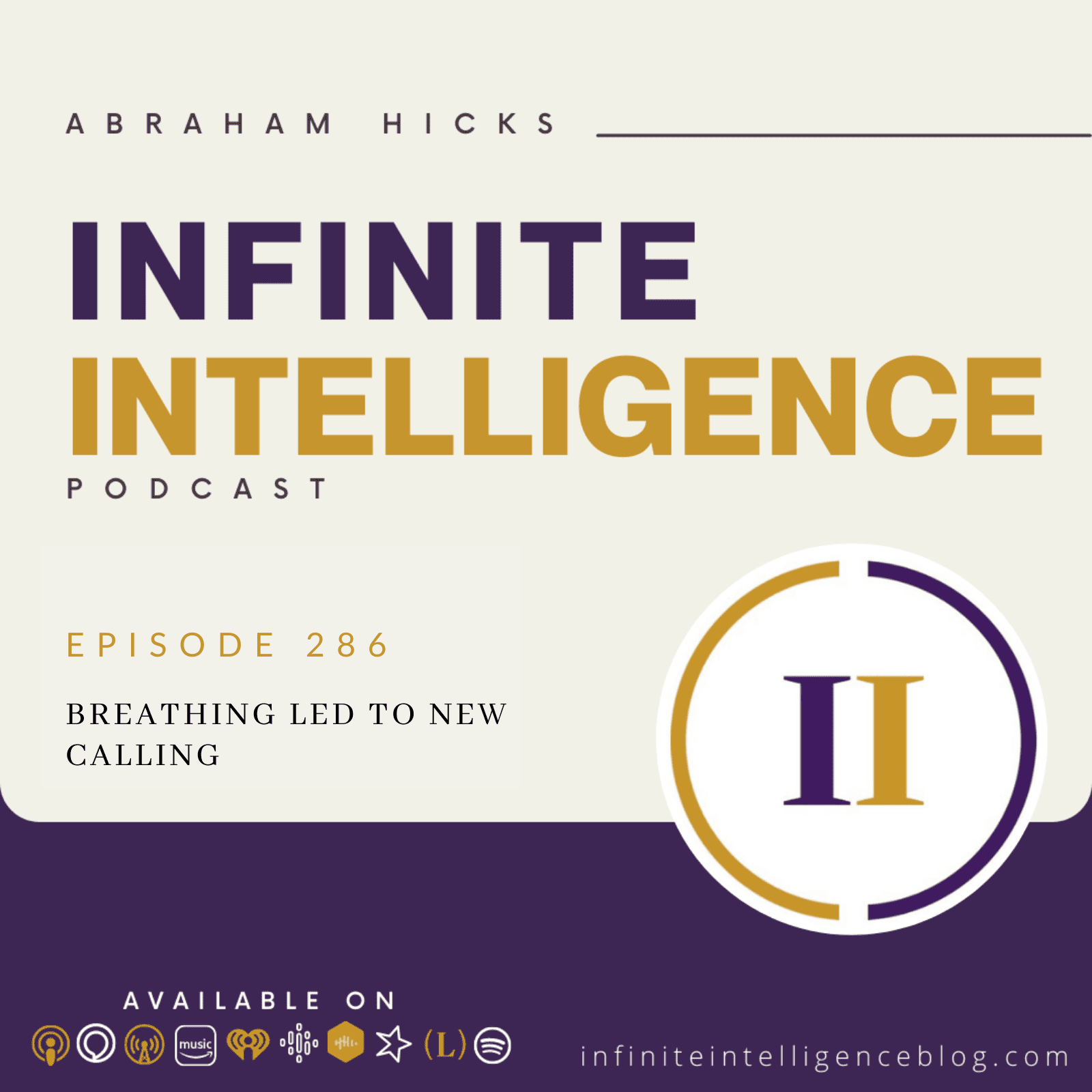 So a couple of weeks ago, something like really profound happened to me, I was taught how to breathe in a meditative way. And all of a sudden, I was listening to one of your recordings and taking a walk by the beach. And I just felt this insane. conscious presence, like, like, hardly insane. But we know what you mean. I no longer just saw objects, but like the ether between objects had a substance. And I felt like the essence of freedom, abundance, and all of those things that I think people reach for with thought just through a portal of breath, basically.

And sometimes it’s spontaneous, sometimes I’ll just be breathing in that way, and it will just happen. And I wanted to ask you, what’s the allowing or the attractive power of that state of presence? Well, there is not a more trackable or obvious path to your connection with who you are than that breathing. And here’s why. When we are teaching meditation, we teach focusing upon breathing. In fact, we offer a meditation CD with odd music that has an unusual flow to it with longer breaths in and shorter breaths, for the reason of requiring some attention to it, which keeps you from being able to give your attention to something else.

So that really is the power of what you accomplished, it was a period of time with no resistant distraction. And so in a relatively short period of time, with no distraction that is causing resistance, the momentum of alignment, especially when your desire is already there, can go very far. Now, it’s important to acknowledge that, because you have desire for that kind of connection, and because you have desire to have conscious awareness of it. In other words, there’s a lot in your vortex that was being satisfied when the breathing puts you in a state of non resistance.

And this is the way anything that you want comes about powerfully and quickly, anything that you desire, especially if you really desire it. And this is a desire that was in your vortex before you even got here in your body. So that’s a powerful desire, with lots of momentum. And so in any exercise that causes you to release resistance, of course, that’s what you’re going to accomplish. The most significant thing, we’re going to tell you a story. So Jerry and Esther heard from someone who was speaking, as we’re speaking through Esther, who when Esther asked, How can we achieve our goals more readily?

This voice said, meditate. And Esther said, What do you mean by that? Because they were business people and meditation just seemed weird. And they were told, sit in a quiet room and wear comfortable clothing and focus on your breathing. And when your mind wanders, release the thought and focus back on your breathing, and so on they went back to their apartment with that intention. They close the drapes, they put on their bathrobes.

They turned out the lights, they sat in some big wingback chairs with an air between them because they didn’t want to do this weird thing in front of each other. And they focused on their breathing and they set a timer for 15 minutes. And right away. Esther described that something breathed her something breathe me she said she was just beside herself about it. Let’s do it again, she said. So they set the timer again and again, quieted her mind because she focused on her breathing. And again, something braised her and then let’s do it again. Jerry’s thinking here we go because Esther is sort of all or nothing.

And off they went again. And so at the end of that third 15 minutes, Esther’s teeth were buzzing the energy that she was allowing us in her not quite yet physical apparatus caused a real toe in the light socket feeling for Esther. But here’s the reason that we’re telling you the story. We’ve been talking recently about how you all in your physical being are on the leading edge of thought. And we’ve mentioned to you here today that you are an extension of this non physical source energy and that your inner being is right here with you at all times.

So, in a state of non resistance, your physical body, which is known intimately and incrementally by your source energy can send forth an intent Sian that in allowing state you will allow or better said you will interpret or better said you will translate or in better words, you will turn the thought or the impulse to the experience or to the thing you say. So what you’re talking about is an absolute, unequivocal outer state of full allowance. So much so that you and your inner being are one to the point that your inner being is doing the breathing. That’s what it feels like.

Yeah, and so much so that everything I thought I wanted, kind of evaporated. And now I feel like a really strong calling to be like a spiritual teacher. Well, when you think about it, everything that you thought you wanted is all tied in together, and one doesn’t have to separate itself from another. And the wonderful thing about an experience like that is once you have tasted, and have conscious awareness of what full connection and alignment feels like, talk about clarity, clarity to see things that your human eyes don’t usually see, once you have had that experience, it’s not that you can’t go back from it while you can.

That’s not the important message that we’re giving, it’s that you never want to there’s no regression, you cannot step back from knowing what you now know, you will never again, feel out here alone, you will never again not know that there is something powerfully within you and focused with you in a moment in time, you will never again doubt that this now that we are all focused upon is the now that you recognize us now. In other words, it’s a wonderful thing. And another thing is usually those experiences never repeat themselves exactly the same way.

Because once you’ve had the experience, you have that knowing. So now, new experiences will happen if they are also in your vortex. So while I’m in the process of allowing still and I want to eventually transition into a because I’m an attorney. So this is like a really mind blowing thing for me that I’m called to something totally different. And I such a strong calling, could you offer a stream of thought to soothe Yes, the most important thing is, the calling will continue to unfold in harmony with the desires that you’ve carved out. And so you’re not going to be called someplace that you don’t want to go. This is an important thing to understand.

When that calling comes, it’s from what you’ve put into the vortex. There’s not somebody else saying oh, there’s a good one, let’s get her. It’s not like that you’re not a puppet on a string. Esther felt great relief when she realized that Jerry was so excited once he realized that they had accomplished this connection with us. And he just wanted to talk to Abraham. All day and all night, he just couldn’t think of anything that he’d rather be doing. And Esther in the early days was a little concerned that he was going to use all of her up in a year. And then she’d just be because it felt so powerful.

But what she noticed was, if she felt reluctance or wasn’t ready or something, then the connection didn’t happen. Or if they were in the middle of conversation with us and the telephone rang, we released her immediately to whatever she wanted to attend to. So you’re not possessed. You’re not a puppet on a string. This is all coming in response to your requests. And so just relax in that knowing Esther noticed, however, well not however, and and Esther noticed that, as the experience unfolded, she trusted Jerry and his eagerness.

She didn’t know what in the world was happening, as you called it insane. It’s not insane. But it is different. Esther, somewhere around those early days, found herself saying to us, I’m willing, I’m willing. And when she came to that awareness, all resistance went away in that moment. And instead of it being a sort of tense experience because desire was strong, but there was some concern or trepidation in her realization that she was willing. All of that went away and then it was just wonderful life giving energizing conversations that left her replenished not depleted. Okay, yeah. Thank you so much. Really good. Have fun.