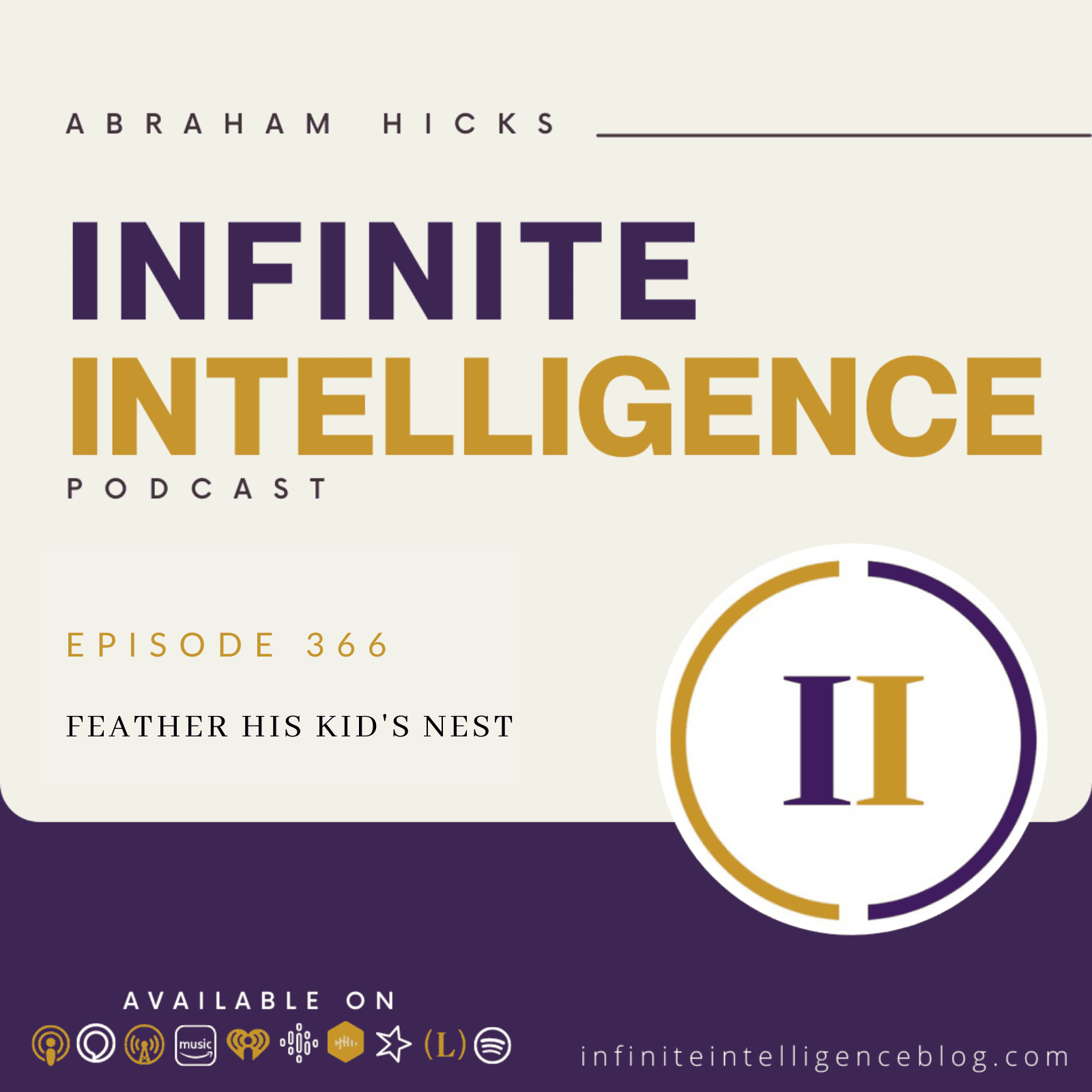 Hello, Abraham, my name is Mark. And I knew I’d be called first. And what I want to talk about is I’m tuned in and keep putting forward into my life, I’m gonna pick up a specific example. I want to be the dad to my kids that they remember is calm, peaceful. without yelling, and temper and things like that, next. And I am getting better. However, I want to get further, we have a couple of questions for you, and we will hear you fully. But are you saying to us that you want to behave in such a way, giving them no contrast that has anything to do with you.

So that they never have to make any adjustments of their own, you’re putting it all on you, you’re wanting to feather their nest in a way that they don’t ever have any reason to have any response or reaction to you? Do you want to be so in alignment, that they could in fact, replace their relationship with their inner being with you? That’s so wise, and dad will know what to do. Dads always got it together. So they never have to reach for any alignment, because Dad’s got it covered.

Because that’s what we think we heard you say. Not sure I understood everything you just told me? Well, we know the reason that we want you to be calm and measured and aligned is because that’s you closing your gap. And that’s you being in alignment with who you are. And that is you broadcasting an opinion, an attitude, a perspective the same as your inner being does, and that is very good for people around you. But we don’t want you to be hard on yourself.

For this reason, if you have what you might think is the good fortune of being a child or a student or a spouse or a partner to someone who is always tuned in tapped in turned on. And so they’re always whenever they hold you as their object of attention. They’re always flowing pure positive energy all over you. If you want to do that for the alignment that it provides for you. It’s a wonderful thing. But if you’re doing it because you’re wanting to affect the relationship that somebody else has, here’s what goes a little screwy with them. You could be so lovely. You could meditate.

Before you enter the family. In the morning, you could be so aware of the way you feel. And you could utilize your guidance so effectively. And when you feel yourself drifting from it, you could make yourself scarce, you could go away so that 100% of the time, they only receive from you that flowing have pure positive energy. But often, what that would cause to happen in them is they would simply then desire or maybe even require that everybody else be just like you.

We would rather hear you say, I’m really happy. I love being with my family. They love being with me. And we mix it up and we have some negative moments. And we have some positive moments. And we all know which or which and we strive to feel good. But none of us gets freaked out when someone’s not in perfect alignment. Because we’re not holding anyone to those standards that don’t allow us to grow. And here’s what we mean by this step one of this creative process is you ask for what you want and contrast is what causes that asking to occur.

So you’re asking even without using words, just life causes you to ask step one, step two is source answers as we were describing earlier because one You launch that rocket of desire your inner being and source energy along with law of attraction, gather the cooperative components. And what you have asked for is answered. However, it’s a vibrational version that you’ve got to find a way of tuning into. So step one happened without you being aware.

And step two happens without anything that you need to do. But step three really is your work. Now you or your kids, whoever it is we’re talking about, have got to figure out how to be a vibrational match to what you are asking for, which means you’re going to feel good when you think about it, you’ve got to think about what you want, not the absence of it. And that takes some focus. We’ll talk more about that here today.

So step three is getting into the receptive mode of what you’re asking for step four, we really liked step four, step four, is being really good at step three might seem like a silly thing to give a step to a whole, just be good at the one before but step four is mastering it caring so much about how you feel. And that’s what you’re talking about, that you just tune in, because you want to tune in, because tuning in to the whole of who you are, just feel so much better than not, because that gap doesn’t feel good and alignment does. So you’re tuned in.

But step five, speaks to what you’re talking about. Step five, is being back in step one, and not being mad at yourself about it. Step five is understanding the value of contrast. So if you don’t ever allow yourself to have any negative emotion about anything, then you can’t really identify what it is that this life experience is carving out for you that is new and desired, you say. So that’s sort of the basis, we get it, that you want to be stable, we just don’t want you to be so stable in anyone’s life, that they become dependent upon your stability, and then don’t need to find their own.

Because someone who utilizes this very powerful mentor, when that mentor is no longer in physical form, or when that mentor turns their attention to something else, then they feel lost, you see. So it’s a fine line, isn’t it between flowing deliberately for the benefit of those that you’re flowing to, and creating dependency, because you’re so very good at alignment yourself. We think the ideal parenting would be to have a natural little tantrum of your own every now and again.

And then, to tell your kids, hey, I’m out of whack. I’m not in alignment with what I want. I know that I’m not. I’m facing reality right now. And I’m out of alignment, I’m going to go off by myself for a little while till I can get back into alignment. And once I’m in alignment, I’ll be back. And then they watch you actually utilizing your own guidance system and recognizing that you’ve launched a rocket and that you’re not a vibrational match to it yet, and then see you go off and change the subject until you come back into alignment.

So step five is for you being back in step one and not being mad at yourself. Because you are an eternal being you know, and without contrast, you can’t expand, none of us can. And so you don’t really ever want to be in that place where there is no contrast for you to grow from. You just don’t want to launch the rocket and launch the rocket launched the rocket, launch the rocket, and then be out of whack with it. We’ve been offering a new analogy recently that so life causes you to know what you want.

So for just a moment, pretend that you are a train and you are on a track, you’re the train. And it’s a flat track, not mountainous, nice and flat. So you want something so you plunk an engine down going bad away. But then you doubt it. So you plunk an engine on the same track going down away. So now you’re going that way in that way at the same time, which means you’re not going anywhere. And there’s a little tension in you. Well, that contrast will cause you to ask for more.

Because for everything you acknowledge you want, you also acknowledge that you don’t have this thing that you want. And so that puts a lot of tension on you. So the idea really isn’t to pile up more engines that just drag your resistant engines along. Jerry and Esther did that once they had these big buses, diesel pushers, 45 feet long toward a big car behind them. And one day, they hooked the car up behind the bus. And Esther knew something was off, the headlights on the car didn’t turn off, but she went down her list. She said to Jerry, I don’t know why the headlights aren’t going off.

And he said, well, let’s just go. So they went. And Esther had failed to release the parking brake on the tow car. And the bus was so powerful it did not even know the car was back there. And they just dragged it like a sled down the highway. Till it burned up the brakes. The brake fluid got so hot that it went through all four wheels and bent all Ford brake drums and it was interesting.

And the reason we tell you the story is because you can get your desire going so strong that even though you’ve got a lot of resistance, you’re just dragging along the way. But it’s not a fun life is so much better if you are sensitive to the way you feel. And you’re changing the subject and releasing resistance so that your desire is running unfettered, you see, but it takes some practice and how you’re going to know really what you do want unless you’re doing some of what you don’t want. It’s the way you figure it out.