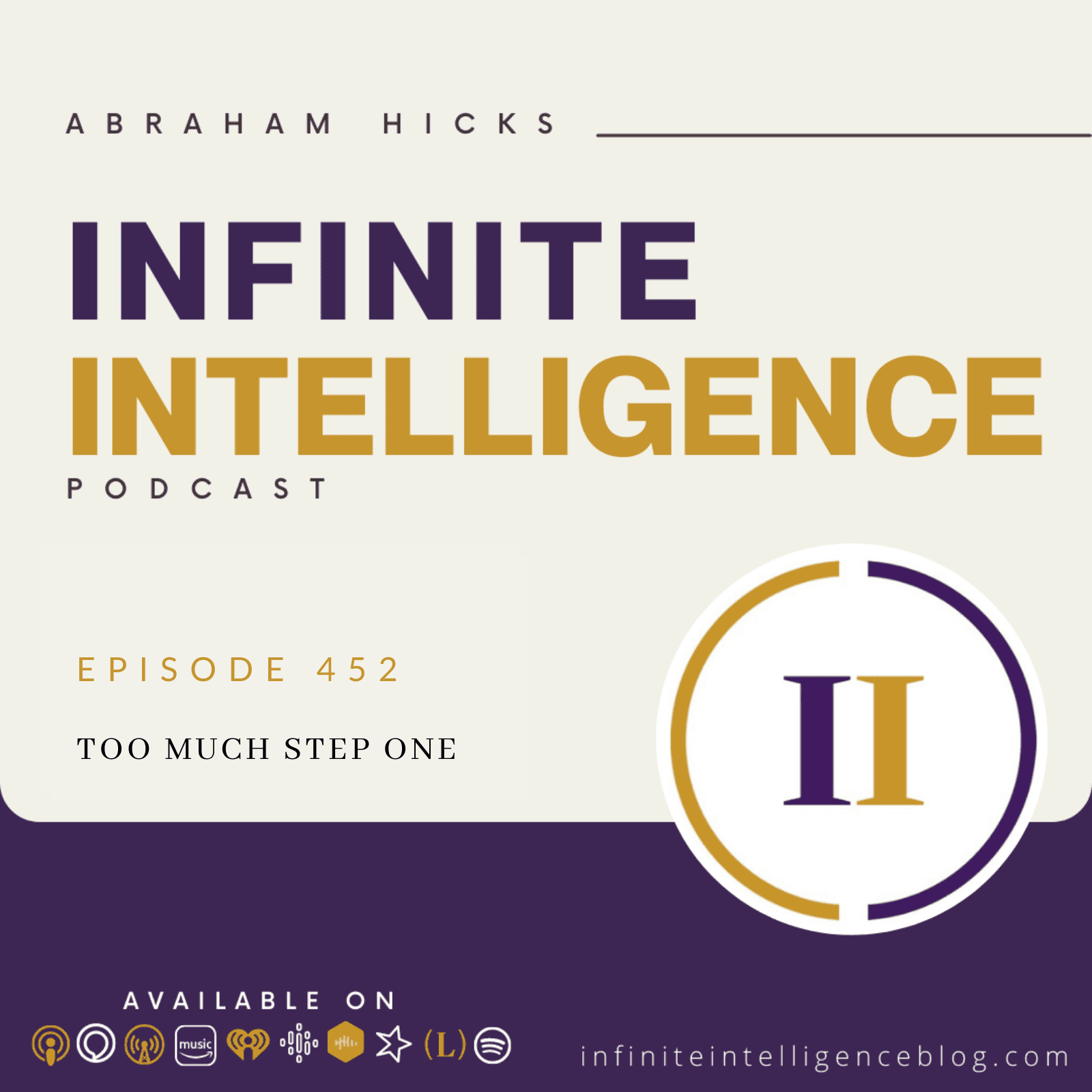 Step one is the defining by you, for all of us, of what you prefer, in this new leading edge situation. Because the situation that you’re standing in, no matter what it is, or where it is, or who’s there with you, is new unto the universe. And so as you are having this experience, you are choosing newly even when you don’t think you are, you’re having a new asking, and when you ask, it is always immediately given, which is what step two is. So when you ask, you launch this rocket of desire, and your inner being and all of the cooperative components gathered there, along with your inner being, which is the equivalent of the energy that creates worlds focuses upon what you have asked about.

If what you think is which really wasn’t what it is, isn’t what you really think it should be. It’s getting a little complicated. So when when do you think what is really isn’t what really is is over there. But you’re over here looking at what is because you are dependent upon what you can see and hear and smell and taste and touch what you can translate with your physical senses. Because you haven’t really become sophisticated enough to enjoy or find satisfaction with what you’re translating with your emotional sense.

Then you hold yourself in awareness of what’s missing. And when you hold yourself For an awareness of what’s missing, you effectively block your reception of not just the satisfaction, but the clues, the impulses, the timing of the unfolding of it. But if we can help you to remember that, yes, this is a reality, and it’s a step one part of the equation, your reality, and what is is the step one, you look around at what you think is it isn’t really what is is what has been this old news, which is what’s happening right now. It’s old news. This manifestation that you want to call what is, is causing you constantly to ask for more, which is what really is. And your inner being stands in that vibrational reality.

And if we can get you focused for a little bit on this vibrational reality is so real, we wrote a whole book about it named it the vortex, this vibrational reality, this vortex of creation, where everything that you’ve asked for is vibrationally. And Law of Attraction is calling forth the cooperative components. So there is a reality that is in the process of becoming that you have the ability of tapping into in a way that you will begin right away to experience the satisfaction of its existence.

And when you learn how to find satisfaction in the existence of what you’re not quite yet able to see and hear and smell and taste and touch, you just know it, then what happens is whole sequences of things begin to happen. Which brings us to the title of the new book, which is not on the bookshelf share. Still in the vortex actually. Every day, a little more of it comes out. Turning thoughts to things. So this vibrational reality is ready for your reception. And your reception is what turns the vibrations to thoughts and the thoughts to things you started getting how it works.

But if you’re over here, still beating the drum of what isn’t in what you think is what is then you don’t let yourself get into the receiving mode. And when you’re not in the receiving mode, then the good ideas don’t come to you because you’re beating the drum of what’s missing. So if you can accept the reality of this vibrational world, and understand that it is just stating that it’s getting ready for you to be ready for it. And you can let your now reality be step one and not let your step one be such a big part of your life experience.

What is is the bouncing off place. It’s not the let’s join together in groups large and small, and point out the insignificance or the deficiencies or the things that are wrong. You all have really gotten carried away. You’re step one, is sucking the life out of you. And what it was meant to do was be the bouncing off place for what you want. You never said I’ll go forth into the physical.

And I’ll look all around, and I’ll see what’s up. And I’ll make piles of the good stuff and the bad stuff. You started and you said I’ll know what I don’t want I know what I do want but you did not say and then I’ll fixate on the bad piles, I’ll write belongs I’ll tweet I’ll look for everything wrong in the world. And I will shine a spotlight on it and I will emphasize it because in my either naivety or in my lack of sensitivity to my vibration or in my just merely habitually focusing upon what’s wrong, you never intended to make the what is and the what is not wanted and what is such a significant part of your life experience.

However, in doing so, some good stuff happened anyway. Because when you know what you don’t want you launch rockets about what you do want. So you have collectively created a vibrational reality a vortex of asking that is stronger, larger, significantly larger than that which has ever existed in your physical time space reality for which means the summoning Power of your collective asking is huge, which means there is a potential gap between you and you that is miserable, or a potential, no gap between you and you, which is the best of life that you’ve ever lived.

When you allow yourself to get in sync with what you’re asking for, when you allow yourself to be in vibrational harmony with what you’re asking for, then as those thoughts become by law of attraction and the momentum that it causes, larger and larger, and your receptive sense is keener and keener. The things you begin to understand the things that begin to occur to you the exhilaration of having a quieted mind, because you’ve been meditating. And in doing so, you’ve stopped all resistance.

And in that quiet space, a vibration becomes robust enough. And in your receptive mode, you receive it. And when that thought bursts into your mind, from a place of non resistance, and you feel the purity of that thought. And then if you’re able to stay there just for a little while, 17 seconds is enough, the momentum of that thought will increase.

And you will be able to experience what it feels like to be on a conscious ride of expanding thought. You are the creator of your own experience. And you had every intention of coming forth and being real in the world. And you knew that your ability to observe the world would be to all of our advantage, both physical and non physical. And you know, that as you sifted and sorted, that you would give birth to powerful and important and personal rockets of desire and you knew that source energy would surround those intentions. amplify them, hold them steady.

Hold them in steady increasing preparation for you. And you knew that while step one was natural, and Step two was natural that step three was something that was going to require your focus because step one gets your attention because you’re enamored with the physical stuff that you can see and hear and smell and taste and touch.