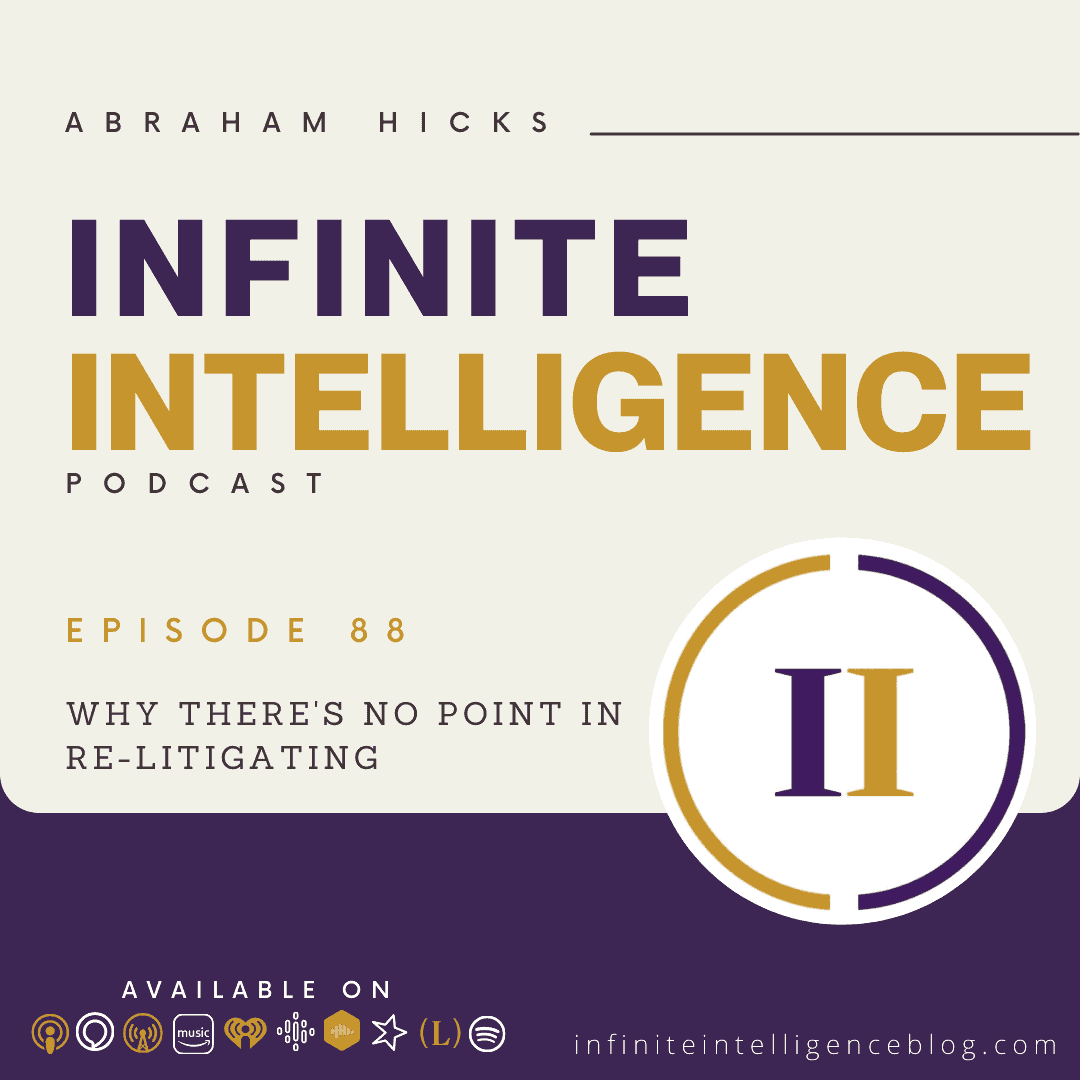 You want to give an example and we can walk through it?

Yeah, there is a person who I have sort of hurt in the past and that she has hurt me in the past. And we’re still very good friends, which is kind of weird. But I’ve always trying to fix things and make it how it was and never really letting go of that guilt. Even when I know that maybe she’s kind of over it or whatever. It’s just not really ever going back to where I wanted it to be. It’s not ever really getting.

But that’s what we were talking about yesterday, when we said, Don’t go back and try to re litigate something because you’re in a whole different place. And when you go back and try to fix it, you activate those old vibrations over which you have even less control now than you did then. And they are worse of a vibrational match for you now than they were even then, no matter how rocky or uncomfortable or what you call bad a past experience was, as you move forward into more and more alignment, when you go back to relive it, it’s better.

And I often find myself, I don’t like to feel this way. But I almost kind of sort of resent them for not letting me try and help them or fix it. That’s that close circuit that we’re talking about. That is sort of electrocuting you a little bit, you’re trying to put current where it isn’t being received. And so it’s a sort of shocking experience, we want to give you some things to suit this. First, we want to say you used some interesting words, you said, I hurt her and she hurt me. And we would like to rephrase that a little bit, we use each other for our excuse for being hurt.

We use each other as our reason to close our circuit and not let the true current from source flow. Because that’s really where it’s all flowing. Nobody needs you to blast them with your current or vibration or energy, everyone has access to the same stream. And there are a lot of people walking around with closed circuits and complaining about it, wanting those of you who appear to have your circuits open to give them some of what you’ve got. We said to someone the other day who was suffering so much over not being able to get through to help someone and we said that person has access to source energy.

And if we can’t get in what makes you think you can sometimes what happens, and this is a very common behavior for our physical friends, when you see someone suffering, sometimes you almost feel guilty because you are not. And then you try to accomplish empathy, which is adjusting your vibration to the same place of disconnection that theirs is and then you’ve got no power to give them but they like you better. And so that’s really the dilemma isn’t it? Should I stay tuned in, tapped in turned on Should I stay in my own power? Or should I adjust my vibration to their frequency so that they can relate better to me. And we say, That’s what many people do.

That’s why you want to gather together in groups of dysfunction, and stand strong against the world who is thriving over there to your disgust. When really what you’re wanting to do, if you’re wanting to help someone, you can only teach through the clarity of your example. And so here’s the way we would go about it. When they are asleep, their circuits are open, when they are happy, their circuits are open. So if you are thinking about them, when they’re not presenting a closed circuit to you right before your face, if you’re thinking about them with appreciation, then you are directing the energy of source on their behalf. That’s beneficial to them.

But what you’re really accomplishing is an adjusting of your vibration about them. Because you cannot be in sync with source and thinking about somebody negatively at the same time. So if your emphasis to yourself is upon feeling good, while you think about them, then you must always know that you’re doing the most that you can do. But you want to watch yourself because sometimes you’re inspired as a thought you’re tuned in tapped in turned on, you’re in the receptive mode, and you get an impulse and you’re thinking about them and happens a lot. You’re thinking about them not because you have regret and not because you need to go back and fix something, but because you had positive momentum with that person too. And so the thought comes the impulses, right?

And you’re in the receptive mode, and then because it’s a familiar thought and it was more familiar in the negative realm than it is in the positive realm, your thoughts turned negative, and then you feel the regret. And then you feel like you still want to follow through with the impulse that was there before the regret was there. And that’s when it backfires. And that’s not only about their circuit, it’s about yours, too. So what we would do, we would think fondly, we would make lists of appreciation, we would even rampage appreciation, if you want to about anyone, and use that as you’re adjusting your vibration. And then what that ensures, is that you are less likely to get an impulse about them. Unless the timing is really right. Isn’t that a lovely thing?

Wouldn’t you like to Doesn’t it sound like just the best plan ever, for you to know when you’re tuned in, and when you’re tuned in your inner being to know when the other is tuned in so that you can be guided to the impulse, we have not put it to you this way before. But that’s really what’s happening. If the circuits open so that you’re going to have smooth sailing, that’s when the impulse comes. That’s what we mean when we say your inner being gives you perfect timing about things. But if you’re just slogging along, and you’re not taking care to pay attention to whether you’re really in the receptive mode or not, and instead, you’re in the receptive mode of vulnerability, or regret or something, and then you get the impulse to go and there’s no benefit, because your non physical entourage hasn’t been out there ahead of you paving the way for you.

Your timing isn’t right, are you following this? impulses that come from that kind of alignment are always good, and you know, because they feel good. And when you follow through with those, when you are chronically consistently able to maintain that vibration, then you can renew friendships, you don’t have to go back and make amends for what’s gone wrong. In fact, you can not someone said to us one day Abraham, are you a forgiving being. And we said no, never. And they were shocked. And we said we haven’t condemned to begin with.

So we have nothing to take back. But even if we have, we are wise enough to know that going back and re litigating would take us from the vibrational frequency that we now are there is no benefit in that you see. And so if you say to someone, I’m sorry, I’m sorry, that I hurt you, what you’re really saying is, in my sorriness, I’m not in the receptive mode, I’m in a different receptive mode. And in my acknowledging that I’ve hurt you, I’m taking credit for your power. And so I’m diminishing you by saying you don’t have an ability to connect with Source Energy on your own, you need me as your conduit. Everything about that is wonky with everything.

Now, you can be sorry, in the sense that you don’t want someone to feel bad, but you cannot get carried away in that without losing your connection, and then you have nothing to give them. So you’re right. Some of them may find you arrogantly in alignment. Some of them might call you selfish, you are so selfish, how dare you feel good when I feel bad? That doesn’t seem right. And you say, All right, I’ve been happy for a long time, I’ll be sad for a month, I’ll be sad or mad, you take the happiness, I’ll take the sadness. Let me know when my mother’s up and we’ll switch back.

It doesn’t work like that doesn’t, I’ll be sick, I’ve been so well for so long. I’ll be sick now and let some of the sick people be well, doesn’t work does it? Everyone has access to the stream, you just want to demonstrate that you figured out how to access it for yourself. And as you’re consistent in it, they’ll figure it out too. And ultimately, that’s the best help I could give anyone the only help you can give anyone, the only help you can give anyone, oh, there’ll be inspired action that comes from that that must be the underlying basis.

And sometimes they’ll say to you, you’ve been gone for a long time. And you may say I was just finding myself making sure that I’m steady. You can find the words to give them but we would spend no time trying to bring anyone out of a funk because you always go in with them. And we wouldn’t be rude to them get away from me, you’re in a funk. You want to be considered of where they are. But that’s what compassion is. Compassion is understanding without joining the vibration. That’s what compassion is. Compassion is being so dominant in your alignment with who you are, that you’re able then to hold someone as your object of attention in alignment.

That’s what Jesus was doing in his healing. If you stood before him dripping your illness, he saw it not at all. Instead, he knew your wellness. And he knew it so clearly because he was in the receptive mode that your illness could not abide in His vibration while he was holding you in his gaze. And then he said go forth and tell no one because he knew you’d go home and you’d complain yourself right back into whatever it was. You’d go find somebody to commiserate with you to empathize with you, to worry with you. Nice to know something more. I mean, I could sit here all day and talk but I forgot to give someone else That’s considerate