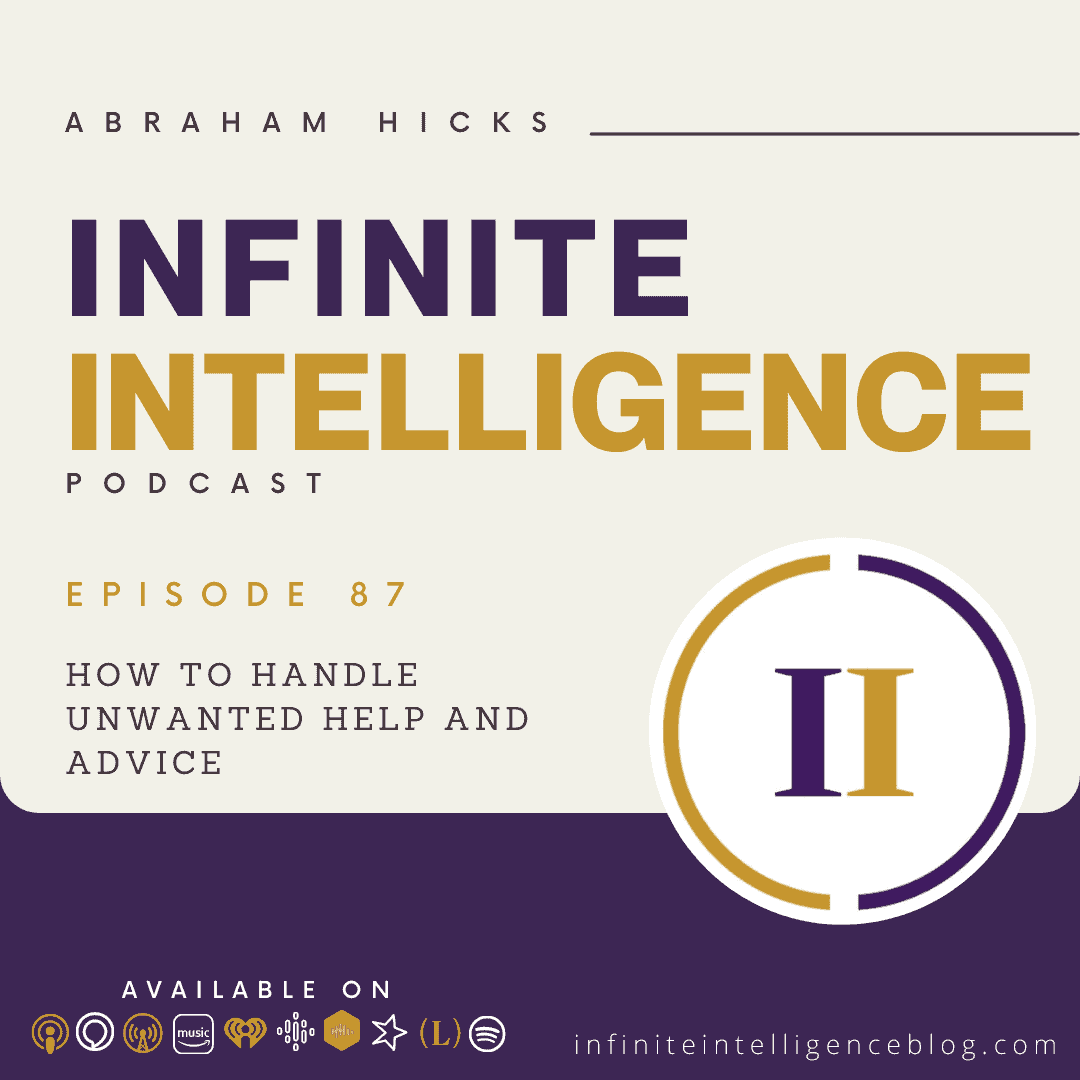 Infinite Intelligence Episode #87 – How to Handle Unwanted Help and Advice

I had a question earlier that I sort of threw aside because I felt like I found the answer. But now, you kind of just like reminded me of it. And I often find myself wanting to help or, please, or educate someone or inspire someone who doesn’t want that from me.

And you’re the only one in this room? Well, I’m sure my family can agree with this, I can be kind of a smartass sometimes. And I feel like my intentions are always pretty good. But sometimes it ends up people resent me. And I feel like it’s because I’m trying to do it from a place of I’m not in alignment, well, maybe, but not always, if you’re really in alignment, you will have better timing. And if you’re really in alignment, then maybe you will be received better, but not necessarily more important to this conversation, rather than holding back.

The way you feel when you are tuned in, is to not worry so much about anyone’s reaction to you. So the question is, are you reacting to their reaction? So let’s say you’re well, meaning they don’t take it well, then you react to them not taking it? Well, that’s an indication that you weren’t really in alignment. But if you’re in alignment, and you mean, well, and they don’t take it very well. And that’s okay with you, then you were in alignment. Yeah. And all of it’s happening so fast anyway, you can tell when they’re asking, you’re really gonna like this.

So you offer your help, maybe in the form of words, maybe in the form of resources, let’s say someone really needs something, so you’re offering it to them. But they aren’t really receiving it from a place of feeling worthy. They’re receiving it from a place of feeling maybe entitled, or maybe titled to the hell entitled or demanding of it even it twists your brain into a knot, because you’re giving them what you think they’re asking for. But there’s blood back to you, especially the ones that know that I want to help. That’s the most confusing ones.

Well, here’s what it’s about. So what’s that blowback about? If you offer current to a circuit that’s not open, you will cause a sort of electrical explosion? The circuit needs to be open. This is a new and good conversation to have, isn’t it? They seem to be asking and you want to give, and then there’s blowback from it because they weren’t really in the receiving mode. So how can you survive such a thing? How can you respond to they’re asking, you know, we want you to know, almost everybody that’s asking for something is not in the receptive mode, because step one is step one, and step three is step three. And so they’re asking, and you are here, I come to say that die.

But what your own business can’t include is when their circuit is open or not. And you just can’t stand on your head in enough different ways to make their circuit open. So it’s helpful if you just say, I can’t win in this because it’s not my job and then just be the giver that you are because it’s nice to give and let them be the receiver if they want to be but hold no stake. Have no dog in the fight about whether somebody is ready to receive what you’re giving, because they usually aren’t.

You know that in your cultural environment, we would like everyone to understand that there’s not a finite pie that has been divided up and divvied out where some get more than their fair share, and some not as much of their fair share. It isn’t like that at all. You could take the whole pie and redistribute it evenly among the population of your world. And it wouldn’t take long before it had redistributed itself back based upon the vibrational point of attraction of all of the individuals involved. And so let’s not talk about the pie anymore, because the pie is constantly replenished.

I offered them as hope wasn’t what they maybe wanted or expected, or they’re just mad at you because they’re not letting it in, but they don’t even have the sophistication to know that yet. It’s like Jerry would say don’t be mad at me and say, I’m not mad at you. I’m just mad. You’re here.