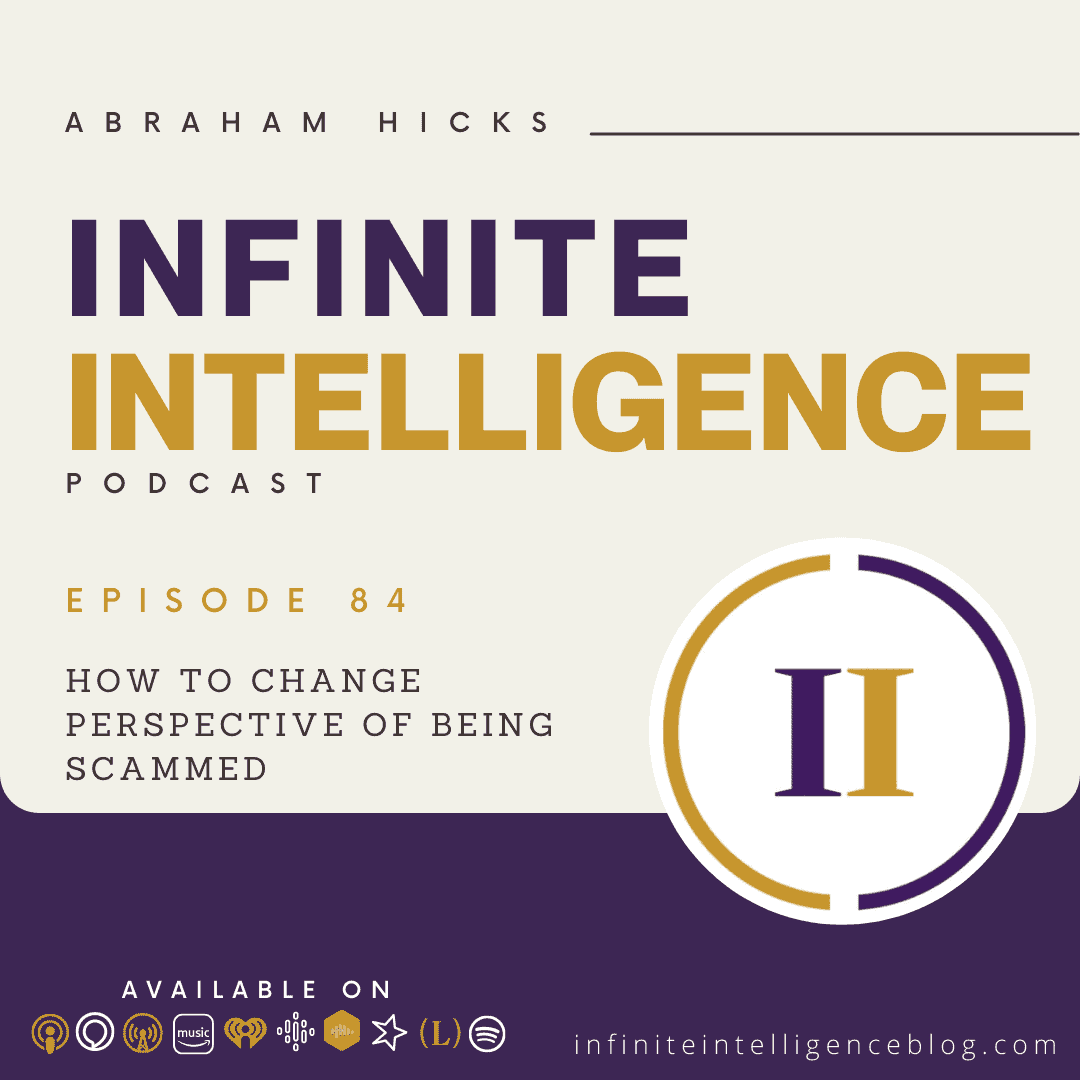 Infinite Intelligence Episode #84 – How to Change Perspective of Being Scammed

You know, like this happened to me specifically, I got this calm by someone who is dear to me. And it cost me a lot of time to realize this, you know, that I was taken advantage of.

But you see, think of the enormous advantage in that. Because from it, even though it is not something wanted, wonderful things come from it don’t be? Well, I have had to grow out of it, realize some other things that I can do differently, and to really open my eyes, and not allow that the love that I have for someone could hinder my relationship to my source.

And that’s not worth celebrating. Yeah, that was so beautifully said, and beautifully understood. So here’s something that happened, that nobody wants to happen, that is a sort of common occurrence, and is sort of accepted as reality. And then a deliberate creator, has it happened to them? And it makes you question a little bit, how could I have attracted something like this? Why would something like this happened to me? And we want to say to you, isn’t it a wonderful thing, when something happens to you, and you’re able to see your part in the attraction of it?

Yes. Now, here’s the next thing that we want you to hear your part in the attraction of it does not mean that you were a negative creator, or that you were not good creator. What if it is part of the process of helping you to understand something that you really want? What if that whole experience was for the important purpose of you coming to the conclusion that you just so eloquently expressed to us just now, because there will always be rascals out there. And there will always be those who disagree with the way you live life.

Because they exist. They are sort of rampant among you. They are everywhere. But you don’t want to be in this guarded stance. Instead, you want to be in that compassionate stance. And by that we mean you know that they exist, you accept their existence, you even understand some of their thinking and why they do what they do. But in your alignment with source, which is what you just talked about, you’re able to see them and love them just the same, because they bear no threat to you. They bear no threat to you, they pose no threat to you, they only pose a threat to you, if you’re in that garden stance. The only threat that anyone could ever pose to you is that that can make you defensive.

And in your defensiveness, you lose your connection with your guidance and your clarity and your resources. We’ve been talking a lot about this receptive mode, want to demonstrate for you just a little bit. So contrast causes you to put a lot of things in your vortex and the vortex spins, and just dates and Law of Attraction gathers it and it gathers momentum, and it becomes a reality that will occur to you. If you’re in the receptive mode. That’s when you get an idea. Oh, you got that idea you because you were in alignment with what the vortex is.

And so the vortex just carried out into your physical experience. And the momentum of it will carry you right to a manifestation of it. This receptive mode means the mode of being able to receive the vibration like Esther right now she’s in the receptive mode, so she can hear isn’t the right word. She can know she is receiving the vibrational knowing that we are presenting and she’s translating it into a manifestation that you’re hearing his words are speech. Well, you all are doing that all the time to you get in that receptive mode and the impulse comes to be in the right place at the right time and so on to have the joyful experiences that are available to you.

But we want to call that receptive mode also. What it really is the replenishing mode. People can’t take from you as fast as you can replenish it. You have no shortage whatsoever. And when you know that, you don’t just start giving to everybody because they really want to find their own way, it’s not a good idea for you to be doing all the giving, and somebody else doing all the taking, that’s not what we’re talking about. But when you are in that replenishing mode, and flowing, then someone takes something from you. It takes your time, or takes your attention, or even takes your assets or your money.

And you stand in this knowing I understand who you are, I’ve been there. I remember when I didn’t know what I know. And I look forward to you coming to a time maybe when you’ll know what I know. Because I know shortage consciousness is very painful. And I’m glad to have given it up. But now I’m in the replenishing mode. And I know that this resourceful universe will yield to me all that I will allow, there’s a stream flowing to me of ideas that will lead to manifestations. And as I tap into that, it’s just uncanny how clever the universe is in guiding me to the resources and the abundance and the blessings that are for me that are for me, that are for me, that I and others put into my vortex that have been gestating that are just for me.

That will be a manifestation one day unless I freak out and get upset about the paltry little stuff that you took from me in your ignorance of law of attraction. I don’t Damn you and I don’t blame you. I understand you because I was there but I don’t do that anymore.