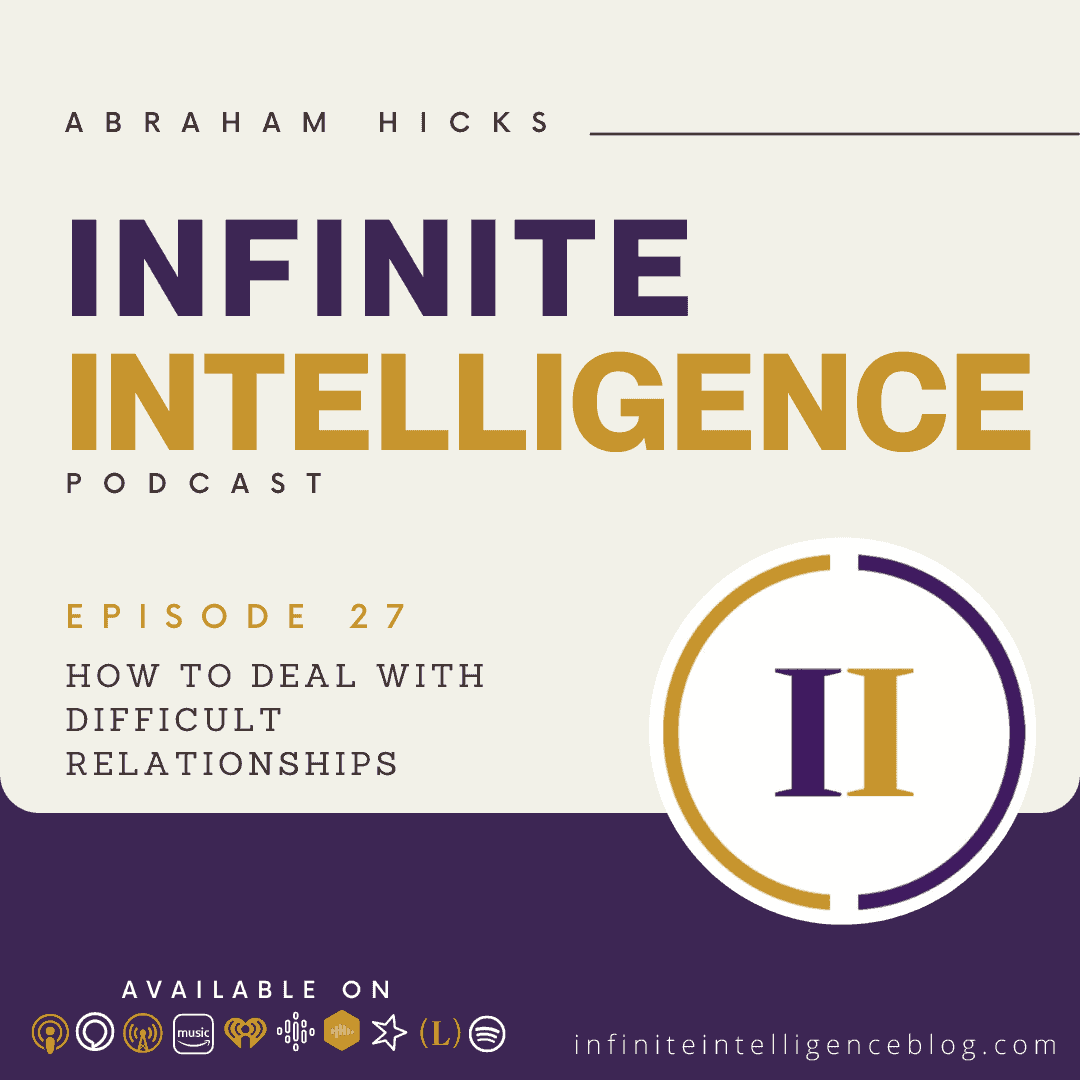 Infinite Intelligence Episode #27 – How to Deal with Difficult Relationships

Wow, thank you for the opportunity. As you were talking, I was thinking about. Having heard you say in the past, sometimes when you want something and it’s not coming that either you’re not a match to it or you need to changer just your thoughts about it. I guess I’m turning her foot thrust. That was I’m told, nervous. Sorry, let me clarify that just a little bit, because we don’t want to give you the impression that you want something and sources saying: oh, no, that’s not good for you, so you can’t have it because it isn’t like that at all. But what we mean is over time.

You put lots of components into this vibrational reality. In other words, there are so many pieces of things that are important to you that are there and we called it a vortex.

We wrote a book about wanting to help. You feel it as the real thing that it is even though you’re physical senses can’t yet see it or hear it or smell it or taste it or touch it. It still exists. So we’re wanting you to follow along in this process of how thoughts do turn to things, how your desires do become, manifested relationship than manifested material objects and manifested states of being, and so, when someone’s rude to you, you want them to be nicer, and when you don’t have enough money, you want more money and so on.

In other words, when you know what you don’t want, you know what you do want and you put all these components over time and a lot of them even there before you came into this body into this vortex, and it is a magnificent culmination of all that life has caused you to desire, and it is accurate to say what life has already caused you to become, but it’s a really rare one of you who could define or describe with very much detail or accuracy.

What is in that vortex? For these reasons, first of all, you put it there incrementally, so you were kind of single sided. In other words, you didn’t like that person being rude to you, but you weren’t thinking about the whole all of humanity, and yet, when you put it in there, the whole of humanity is considered.

You see what we’re getting at and over all the times that you put things like that in it, you kept refining it until who you really are, and what you really want is indescribable to you, because, not only because you put it over a long period of time, but because it has been been tempted to buy your inner intervene, it has been growing because of law of attraction. So it’s more than you would recognize by it’s individual pieces.

It’s sum, total is more than it’s individual parts, in the sense that you might remember the individual parts, but you can’t really realize what it’s all come to an example would be Esther when she was playing with Jerry and they realize that Abraham was flowing to them, made him promise not to tell anyone, because she didn’t want to ever do this.

She doesn’t want to be the weird one who hears voices. She did not want that, but so much about what she did, what she was born to be an up lifter. She cares about people, understanding she likes people, knowing she’s a process, oriented person. She likes having a formula that works for her, and so little did Esther know what was in her vortex and what was becoming.

It was through the path of least resistance that she discovered it and accepted it one piece at a time. So what we really want to say to you is that who you are and what you want is always much bigger than this specific thing that you think you want right here and now. You might think that you want this job, that your life depends on it because you’re out of money in this job matter so much when, through all the jobs that have been working, you been asking to be considered environment.

It doesn’t necessarily mean this, isn’t the job for you, but it does mean your point of view right here and now does not jive with what your infinite intelligence is thinking about the same subject at the same moment that the emotion is present helpful, yes and that’s thoughts that were on my mind when I was sitting there had to do with relationship and as I’ve been sitting here been thinking, I’ve had a near miss in intimate relationship, have a relationship with my niece who lives in my home and then there’s relationship with people at work, one in particular who’s.

My niece in the other can be rascals, so I’m trying, in the case of the latter two were someone who lives in the house, not an intimate relationship and work trying to consider positive aspects one sometimes I just want to shake them up my frustration level, I’m trying to figure out how to back away or consider positive aspects of people I wanna. This is always true, and this can be a guiding philosophy for you or guidance tool for you.

You’ve made lists of positive aspects. You tried to pretend that the vibrational differences aren’t there, but the vibrational differ. Chances are they’re, so one of two things will happen when you tune into who you are because when you tune into your inner, be you dominate the environment. You’re power of influence become such that those who are not up to speed with what you’ve got going on either must join you in up to speed this or they have to go somewhere else.

Thank you for the reminder. What happened if they’re really driving you out of your mind and other people too, you don’t get up to speed. You talk about it. You hold yourself in the vibration. You make yourself a perfect match to the trouble that they are fit okay guilty as charged yeah, and so one of the things that we really like saying to all of you would been saying that a lot in the last two or three or four or five hundred seminars.

There are two ways to know what you’ve got going on. Vibrational one is by how it feels, and one is by how things are turning out. So in this understanding of how vibration is turning into reality. It just is thoughts, do turn to things.

So if you’re hanging around up here feeling really really good and you get an impulse to go, work someplace, usually everything about that matches, how you were feeling for a consistent amount of time before you receive the impulses before the idea of that even began occurring to you, why it unfolds felt good all along the way, but let’s say you’re having a miserable time that somebody’s just been driving you crazy and you’re, trying to figure out what to do about it, and you take action from that point of view.

That action will bite you hard yeah. So you really do want to get here before you act.