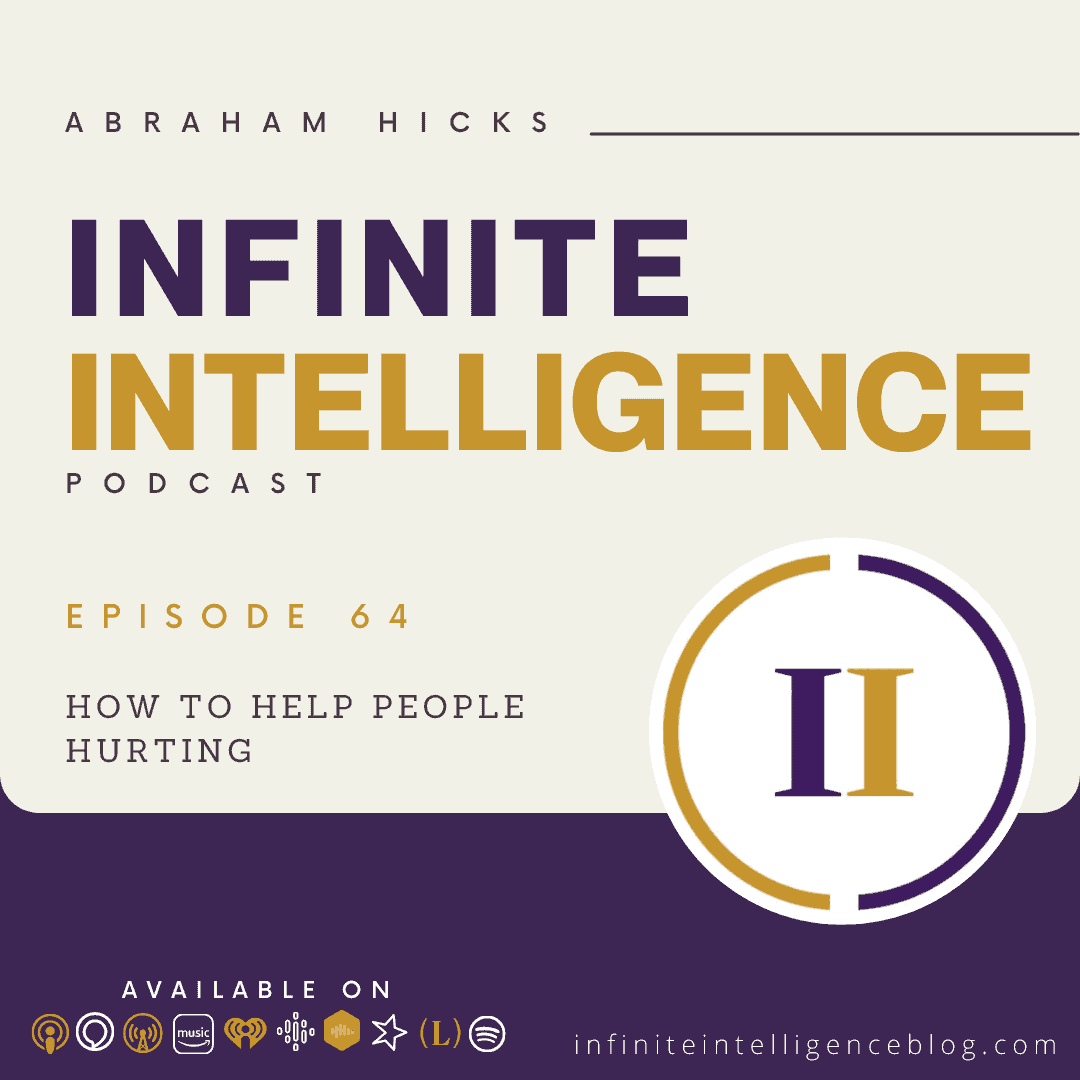 I was on my way here. And I realized that so many things in my life are so good. Now. That was a great moment. I’ve been listening to you for a long time. And I’ve gotten to some new places, but I work with people like that woman that you just spoke to. All day, I run a behavioral department at a pain clinic. So I’m with people who are hurting a lot, and I want to help them so much. But that’s really hard. What you just did? I don’t know, I want to do it better. I want to do it.

Do we have to make you run around the room? Yeah. Well, first, you have to acknowledge that people are where they are. And so the tendency is to meet them where they are, yeah, well, when you meet them where they are, that’s how you become the punished. When you see a pattern of people, and it’s predominant your experience is sort of teaches you how to think. And then you begin offering those vibrations. And that seldom offered thought becomes a more frequent thought. And then a more frequent thought becomes a belief and then a belief becomes an expectation.

And then you can’t help because your expectation is in a different place. So you have to remind yourself how this really works, you have to remind yourself that whatever it is that you are seeing, that is manifested is only a byproduct of a whole lot of things that came before. And you’ve got to get your attention on what came before, here’s the most important thing for our friend, or for any teacher that’s trying to uplift anybody, it applies to the conversation we had about food, it applies to everything, this is the most important thing you have to understand. So they have a condition that you’re aware of. We’re not asking you to point out the vibration that led to this existing condition, we want you to talk about a vibration that hasn’t led to anything yet.

So here’s somebody living something that they don’t want to live, and your teacher, a healer, a facilitator, wanting to help them change what they’re living. So you’ve got your attention on what is for them, whatever condition they are currently experiencing, it could be a financial disaster, it could be a physical one, like you’re describing. So you’ve got your attention on what is. So it seems like sometimes that what Abraham is teaching is, you need to point out to them, what they were doing energetically that led to that condition. But that only encourages more of that condition.

I don’t it’s hard, I get pulled. It’s hard because you’re doing it in a way that won’t work. It’s not hard. That’s impossible. That’s not just hard. That’s undoable, that’s accomplishable. That’s not just hard that’s going about it in a way that will not work. So we’re wanting to shake you into looking at it in a different way. Does this person that has this physical, whatever they’ve got, do they have an energy body? And is their energy body lethargic and depleted? No. So when you like to help them realize that they have an energy body and find some way to connect them to it?

Yes. And don’t you think no longer talking about where they are is a first really important step. It’s like, you’ll come to us and you’ll have 10 things that matter to you and nine of them will be working well. And you want to talk to us about the one that isn’t. So you take that one that isn’t and then you make the other nine not work well either for the time that you’re focused upon that one that isn’t or you could do it the other way around.

You have nine things terrible and one thing that’s working you could focus on the one thing that’s working and the other nine would become a non player in your vibration you could get in the reset The moment you can start receiving insight and inspiration about what to do about those other problems, unless the problem is active, if a problem is active, the solution cannot be active at the same time, as solution vibration and a problem vibration are two entirely different vibrations.

So you’ve got to distract them from their problem long enough that they can find a feeling of helpfulness or a feeling of expectation. And you can’t help them do that. If you don’t believe and right now, you don’t, I’m also scared of getting in trouble. At work? Well, we understand that the medical vows say if somebody’s got something bad, it is your duty, as a physician to perpetuate what’s gone wrong. We thought and what you sign, I will not give fault code. I will not pretend that there’s a possibility of getting better under these conditions.

I mean, I feel like I came in with the first group that I ran. And I feel like I was trying to hold this space that you’re talking about and they got in the beginning, they were excited. And then I felt like they just something happened. I mean, it must have been me, but I lost them when they were attacking. You know, it’s not an easy thing, to have a lot of attention on unwanted. It’s a really normal thing to be conditional and responsive to conditions.

Everybody does that. But at some point, you have to accept the not feeling goodness of that. And you have to make another decision. And you have to become selfish enough that you’re not willing to think those thoughts of feel so awful. You want to say to them, sort of like we just said to our friend, we will not accept that you cannot do this. And you can argument an argument and argument and demonstrate your lack of progress all you want, I’m going to continue to know what’s possible for you, isn’t it miserable.

When you feel miserable, and some bright shiny person tries to cheer you up? Don’t you just want to punch their lights out, don’t you want them to just go away and leave you alone. Nobody wants you to try to fix them. But when they’re coming to you because there’s this illusion that they seek, you’ve got to find a way of feeling better. And you’ve got to do that before they get there. You got to get your energy going before they get there.

So do it. Is that okay? Okay. What do you keep saying to us, Abraham, happiness is a very great price that I’m going to have to pay in order to help people. I’ve chosen this profession of helping people and dammit, they won’t let me help them. And not only am I not helping them, I’m starting to feel just like them. And we say, gotta turn your eyes to something different. And it doesn’t mean you have to back away from that. But it means you’ve got to get your energy going before you go in there. This is a good conversation to everyone about everyone.

So we just have a few really simple questions for you just to sort of lighten this up so that you’ll understand that we’re not beating up on you, we just can feel the power of your desire is so strong, and your willingness to hear, because we’ve already seen the price that you’re looking for. But we just want you to know, you can never get to that price if you don’t do this first. And you just want to jump over there like everybody else does. And you got to do this stuff first. And sometimes this stuff shows no evidence, it just feels better. Sometimes this stuff shows no evidence.

There’s something in you, we’re just going to tell you because we can feel it so powerfully. You will not allow yourself to be happy when you’re dealing with so many miserable people. I just feel wrong to you to be happy dealing with so many miserable people. And we want to say you can’t be sick enough to make sick people get well, yeah, to do that you never wake up in more than Oh, I’ve been well, for so long. I think I’ll be sick for the next month so that maybe some of those sick people can be

You say you’ve got yourself in a cycle that you can’t win, I guess I need to tap into source energy in order to help them but I’m afraid if I tap into source energy, they won’t like me. And we say who cares if they like you or not just help them. You teach to the clarity of your example, you might tell them a story, you might say I was pretty happy person. And I wanted to be an uplifter and a helper. So I got educated and I got this job. And my heart was singing because I wanted to help those like you. And so then a stream of you came into my experience.

And the happy person that I once knew myself to be got more and more and more unhappy, I started to feel more like you, it shocked me, because I’d never felt like this before. But now I’m feeling unhappy. And then one day, I thought, I’m not helping anybody feeling like this. And I was happy before and I’m unhappy now. So maybe I can be happy again. So I focused and thought and focused for my clarity and my alignment until I came back into replenishment until I came back into knowing because I want to help you, I want to help you.

I’m going to hold you as my object of attention and it’s not going to be possible for you to feel defeated and broken like you’re doing right now. So you heard my story. I felt good I focused on you and I felt bad and I’m not going to do that anymore. I’m going to be who I know I can be so that I can show you who I know you can be really good. Now run around.