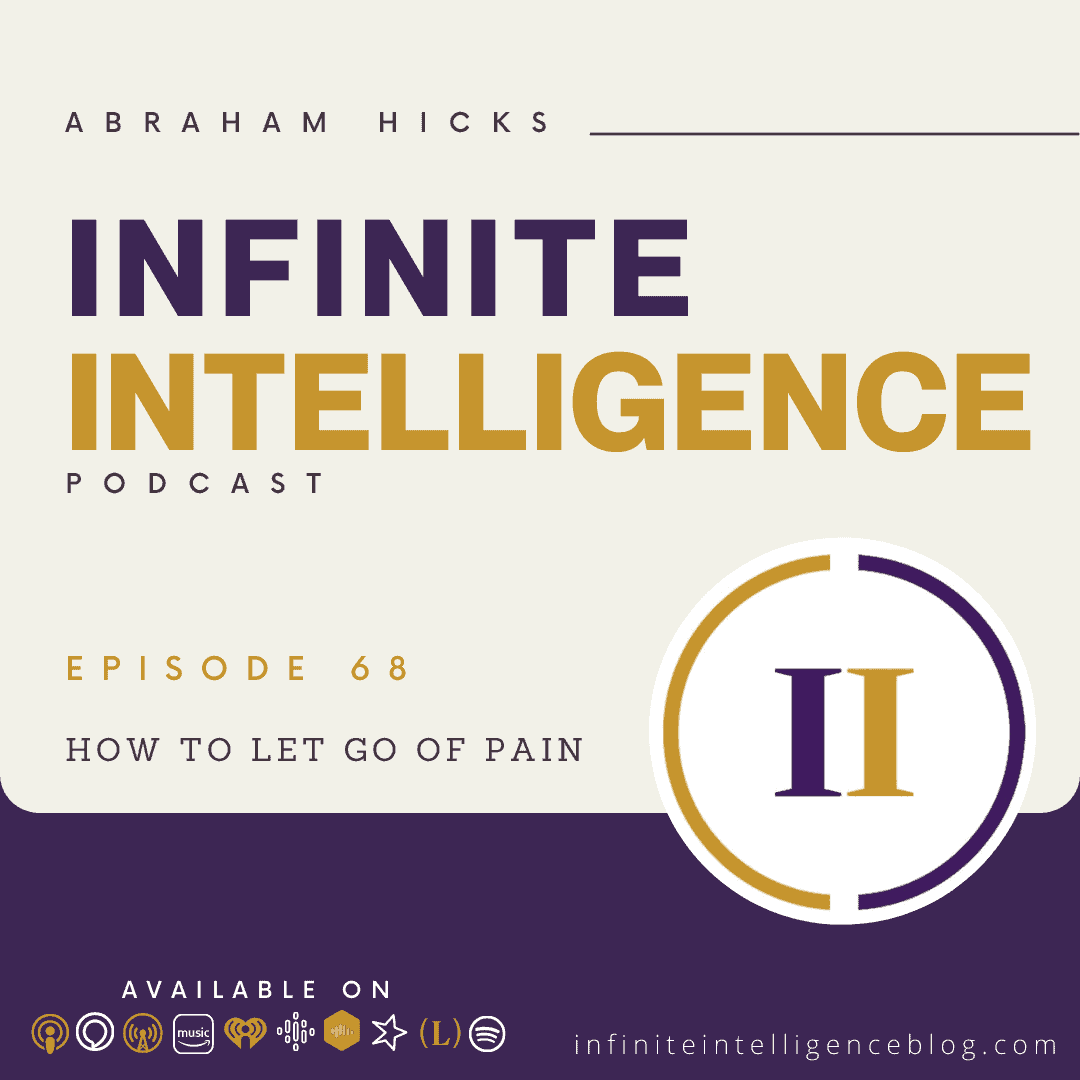 Infinite Intelligence Episode #68 – How to Let Go of Pain

Hello Abraham so I ended the South Pacific cruise. So I only found it appropriate to kick off the Cancun cruise

Can you hear him?

here knows, I hear yeses. Okay, so it’s been like 20 months since I’ve been listening and three cruises and a workshop and things have moved really fast. And I just have like this question. I’m like, physical pain. Because I’ve been like transforming my body a lot. I’ve lost like, I don’t, you ain’t getting much better shape, and everything else. I have a physical pain and I know that it’s only something that’s in my vibration.

But what is like a sifting process or something that I can do to learn more to get rid of this pain because it’s excruciating in my base chakra basically, is where I believe it is. I just don’t know how to unleash it, I feel like there’s a there’s a beast inside of me that needs to come out, I don’t know how to like, like, let it loose we don’t think they want it to go. The thing about physical discomfort or anything that you say you want to go away is that this is an inclusion based Universe.

In other words, you are translating these vibrations through your solar plexus through what you want to call your energy center. Everything that is moving vibrationally because of law of attraction, gathers momentum, and the more momentum that it gathers, then the more specific it is, and the more specific it is, then the more ability you have to see it, hear it, smell it, taste it, touch it. So let’s just say maybe for the first time ever, that anything that you’re experiencing physically, you’ve been feeling emotionally for a very long time. Let’s just say it that way.

Because most of Do you think it’s the other way around, I feel pain in my physical body, and therefore I am emotionally distraught over it. No, you have the emotional thing going on, before it was translated into greater specifics by your see it, hear it, smell it, taste it, touch it, feel it, don’t you like knowing that isn’t it helpful to know. And so rather than starting on the outside of it, where you’re trying to treat it with ointments or surgery, or physical manipulation or whatever, what you want to do is treat it from where it began, or at least try to find some emotional relationship to it.

And other thing that we want to say to you, and we love having this conversation with you, because there is not some big, dark, heavy, problematic thing that you’ve got going on, you’ve not been carrying around some terrible burden that is now manifested in a very dramatic physical discomfort, if not like that at all. It’s that you represent almost everyone on the planet in the sense that you’re sensitive to energy, and you care too much what everybody thinks.

You develop a source of tension, it manifests in struggle or strain it manifests in trying to do something through action, and words, that only can be accomplished through energy alignment. And so just stop talking. I feel like that’s like the only way that I can like, help people understand like, just like, stop and be you almost have, yeah, yeah. Yeah. No, just stop caring what they think about what you say, say all that you want to say, say all that you want to say. Just decide that you’re no longer going to be a reactionary, you’re not going to have a reaction to what they say back. So you understand that it’s a vibrational universe.

And if you are, if you’re in the receptive mode, when you’re broadcasting, then you are broadcasting with a lot of momentum. When you’re in the receptive mode, and you have all that a source energy at your back, when you are broadcasting and source energy is flowing with you because you’re pinching none of it off. That is a force to be reckoned with. And what we mean by that is that kind of alignment is more powerful than millions and millions and millions of people that are just in the action mode.

Now your broadcast is not that powerful. And in your less powerful broadcast, someone responds to you, and then you begin responding to their response. Even if it’s not about words, you see what we’re getting at. And after a while, what begins to happen is your broadcast becomes less than it could be, as you broadcast continuously, or pretty often from that less receptive mode. There’s this receptive mode where you’re in sync with who you really are. And there’s the receptive mode, when you’re feeling overwhelmed, your receptor is always on. And what’s coming back to you is coming in response to where you’ve got your receiver set.

Yes. So it really is about caring, first and foremost about what your emotions are, which is really the nice conversation that we began with just now, isn’t it? I care about my emotions more than about the physical, but Abraham, my emotion just feels like emotion. And the physical discomfort is so much more real. And we say it’s not more real is just more translated by you and your physical senses. Can you hear that? You’re just translating it with more specifics. That’s all. It’s not more real. It’s not more real. Your emotional basis is the reality that we really want you to focus upon.

It’s what you walk around with. It’s your attitude and your attitude, that mood. Those are words that describe your emotional beingness. Yes. So as your emotional beingness is one of caring about something over which you have no control. Well, then you’re screwed. Enough for now, like the ablator. We’d like beginning in this way, because we’re making more of this than your experience is really calling for. But we do want to get everyone’s attention, especially yours, that you’re walking around, seeming like, everything’s wonderful. But if you’ve got this underlying thing that’s going on, that really equals your point of attraction, then that’s when you feel like you’re being blindsided by things, and you never ever are.

And the momentum of it was far enough down the road that now she was dealing with uncomfortable things. And like you she was wanting to know what to do about it or really what the basis of it is. And so we have this same kind of conversation with her. And then we’re talking about how happy she is when she’s driving and how comfortable she is on the road. And how nice it is to have her hands on the wheel and how much she loves the open road and how natural it is to stay in her lane. And in control of her vehicle she is and how she never tries to occupy the same space of the car ahead of her. And when she feels the rumble strips on the edge.

She does something about it. She doesn’t feel the rumble strip and say, Oh, I’ll wait a little while later like snoozing your alarm in the morning. I’ll wait a little while she doesn’t wait until she’s off in the grass or off in the mud or off in the ditch or off the cliff before she corrects her driving. She stays in her Lane she knows about staying in her lane. And it is so natural to her because she has not enjoyed being off in the ditch she has not enjoyed being off the cliff is so inconvenient messes up your car, you have to wait for a whole other body it’s then you got to grow up again.

All that growing of teeth and hair and getting your parents off your back. It’s a slow, inconvenient process. So you started want to stay in your lane. And it’s the same sort of thing with your emotions. Don’t get off in the ditch, don’t get off there. Don’t you know it don’t you know, if you ponder it just a little while the thoughts will get bigger and heaven forbid, if you talk to somebody else about it. And they’re in any kind of agreement with you off, you go off you go off you go.

And the thing about it is we know you think that you’re looking for a solution, but you’re not, you’re on your way to the ditch. And the solutions are not in the ditch, there’s just more problems in the ditch for you to ditch about. That’s all it’s over there. So you just want to be sensitive to the rumble strips. And when you feel the rumble strips, when you’re aware that you’re crossing the line, Esther has a wonderful new vehicle infectious to have them exactly like in two different places. And when she even approaches the line, even if there’s not a rumble strip, the car knows it and it shakes her seat for quite a while she just wrote there you know, you want to get your feel for your vehicle. Yeah.

Because the energy today will take the place of anything that you’ve been spewing. You’re not bringing it forward with you. But sometimes you do repeat it because your habits are your habits. And so as you begin caring more about how you feel I’m doing something about that everyone on a more regular basis, what happens is the momentum that had been created by past attention to different subjects causing different emotions, begins to subside. And at the same time, it begins to be replaced with a more consistent more chronic flow.

And then eventually I am very quickly you realize that oh, that was bothering me is no longer bothering me it seems to have left my experience. And the reason is because the basis of it left your experience. Not something big, just a whole lot of little troublesome things helpful. Really.