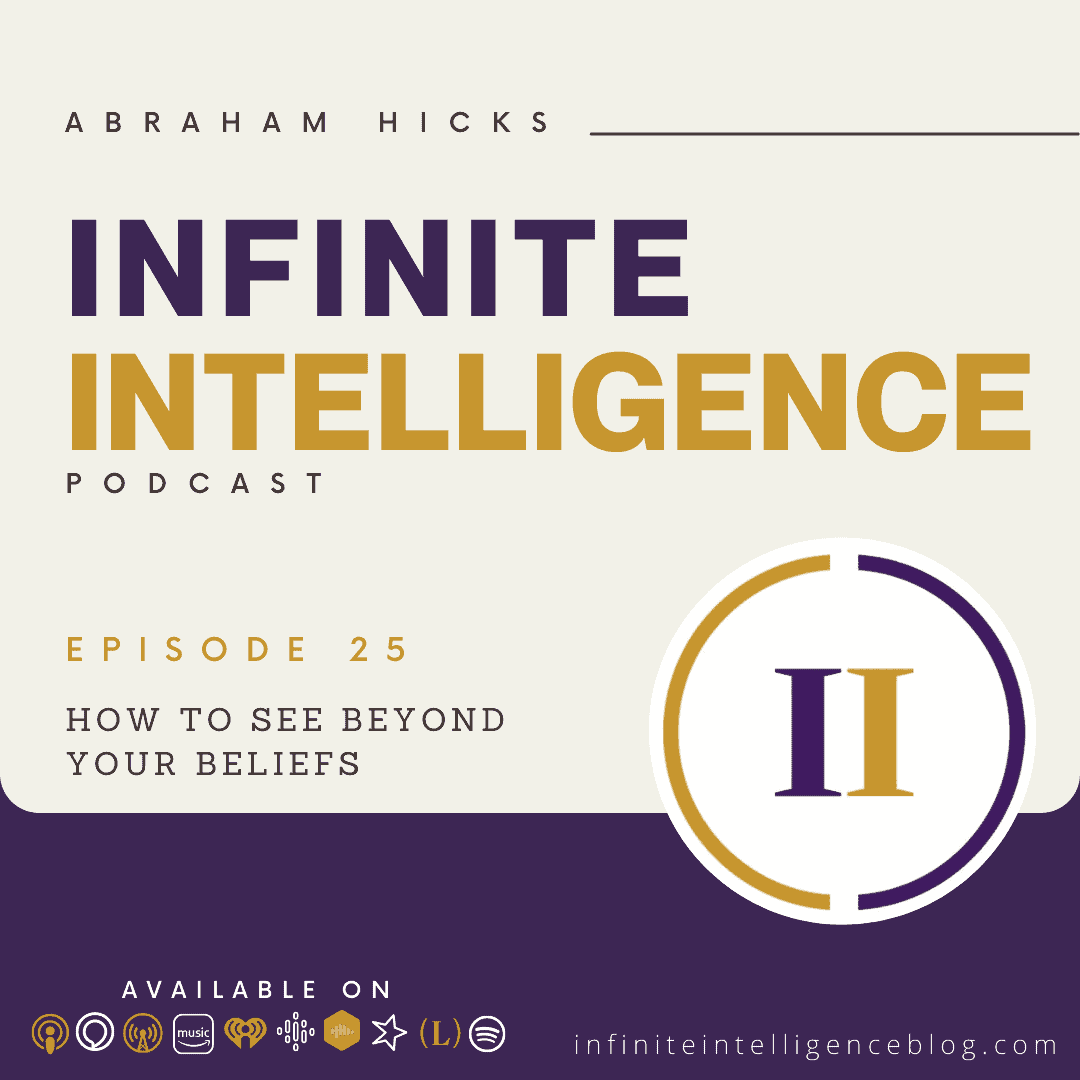 Infinite Intelligence Episode #25 – How to See Beyond Your Beliefs

Good morning. We are extremely pleased that you are here. It is good to come together for the purpose of CO creating.

Do you agree? Taking thought beyond that which it has been before? Yeah. You’re knowing what you are wanting? Are you enjoying how your personal desires continue to expand? Yes, the answer is yes, yeah. Because if you’re enjoying new desire, that means you’re staying pretty much up to speed with them.

You don’t have beliefs that crush them. If you want something, and you don’t believe it will ever happen, that desire is painful. I want this thing I believe I cannot have. And if that is the case, then you start drumming up all kinds of excuses, justification and rationalization. And usually blaming of others and yourself about why this thing you want can never be it’s Obama’s fault. or, or, or, or it’s either Obama’s or Mama’s usually, that’s usually the excuse that most use when they’re standing in a place that they have desires, but they can’t figure out how those desires will ever come about.

And the reason that most have a hard time sometimes, believing that a desire that they hold dearly, can happen to them, is because they are so accustomed to looking at what is. And since what is right now doesn’t currently hold the desire that they want, then, in their observation of the absence of the desire, they offer a vibration about the opposite of what they want, which gets them all energetically discombobulated.

You have to be in the receiving mode in order to be aware of those ideas, and rendezvous cues and clues that are constantly being shown to you from broader perspective, the path to what you want. And you may not like these words very much. Esther doesn’t like them, and she’s gonna say them has already been revealed to you. In other words, the path to get you from where you are to where you want to be, is already known by non physical and is already being shined for you.

But if you are all balled up in an awareness that it isn’t coming, that it hasn’t come that you hardly know anybody who’s received it, or who’s living it, or that it’s just not the way it is in your family or or or if you are offering those kinds of thoughts and those kinds of words, then you’re not in the receiving mode. A

nd even though good ideas are being offered to you, that would take you in most cases directly to what you want, or at least on a very good, happily unfolding path to them. You don’t pick up on those clues. The other day Esther had what she considers to be the most remarkable personal experience showing her how emphatic her beliefs are in what she is able to see.

She was sitting at her dressing table and she had her makeup spread out all over the place. And she has a powder it’s a loose powder that has a powder puff on it and the powder is screwed into a little container and then another lid is screwed on top of that. So she got all ready for the powder and she picked up the container and it was only the empty lid. And she thought, Oh, where’s my powder? So she looked on the dressing table.

She was shocked and she’s there by herself was a lot easier when Jerry was actually could blame him for everything that was missing. No one had been in the house except Esther. She still sort of wanted to blame him.

spook What did you do with my powder she could not see it. And so She went to her bedroom and started rifling through her suitcase. She sort of lives out of her suitcase, even when she’s at home. And then she thought, well, maybe I left it at the San Diego hotel. And so then she made the bed and did some other things and went back to her dressing table and sat down. And there was the lid and there was the powder.

They were not three inches apart. They were right there. And at first, she panicked just a little bit, because she thought she had lost her mind completely. How can this be something that I want? It’s right in front of me? How is it even possible that I could not see it. And so later on, as we’re shooting with her over some other things, working on a new book, and she’s all in the receptive mode, we said to her, you know, you believe that that powder was under that lid, you believe that that’s where it all within.

You can’t see beyond your belief, that’s the statement that we’re wanting to say to you, you cannot see or receive beyond your belief. So if you have a belief that you cannot do something, because you have not yet done it, or you cannot do it, because someone told you, it’s not likely that you can do it, if you’ve practiced a belief. That is one way, even though source energy is sending you endless streams of consciousness and energy, and opportunities, opportunities to discover.

So what happens is, we never give up on helping you to know what you need to know, in order to receive the desires that you’ve already set into motion, there will always be another opportunity, your inner being will guide you on the path of least resistance. And so since Esther’s path of least resistance was not seeing it right where it was, because it wasn’t where she expected it to be.

The path of least resistance, took her to make the bed, took her to do some other things, took her to do some things that got it off her mind took her away from that acting belief that it was lost, and then she could see it. Even though we know it sounds like a really silly, maybe even ridiculous analogy. It speaks so powerfully to why so often, even though there are things right there for you to see. You can’t see them because your beliefs are in the way.