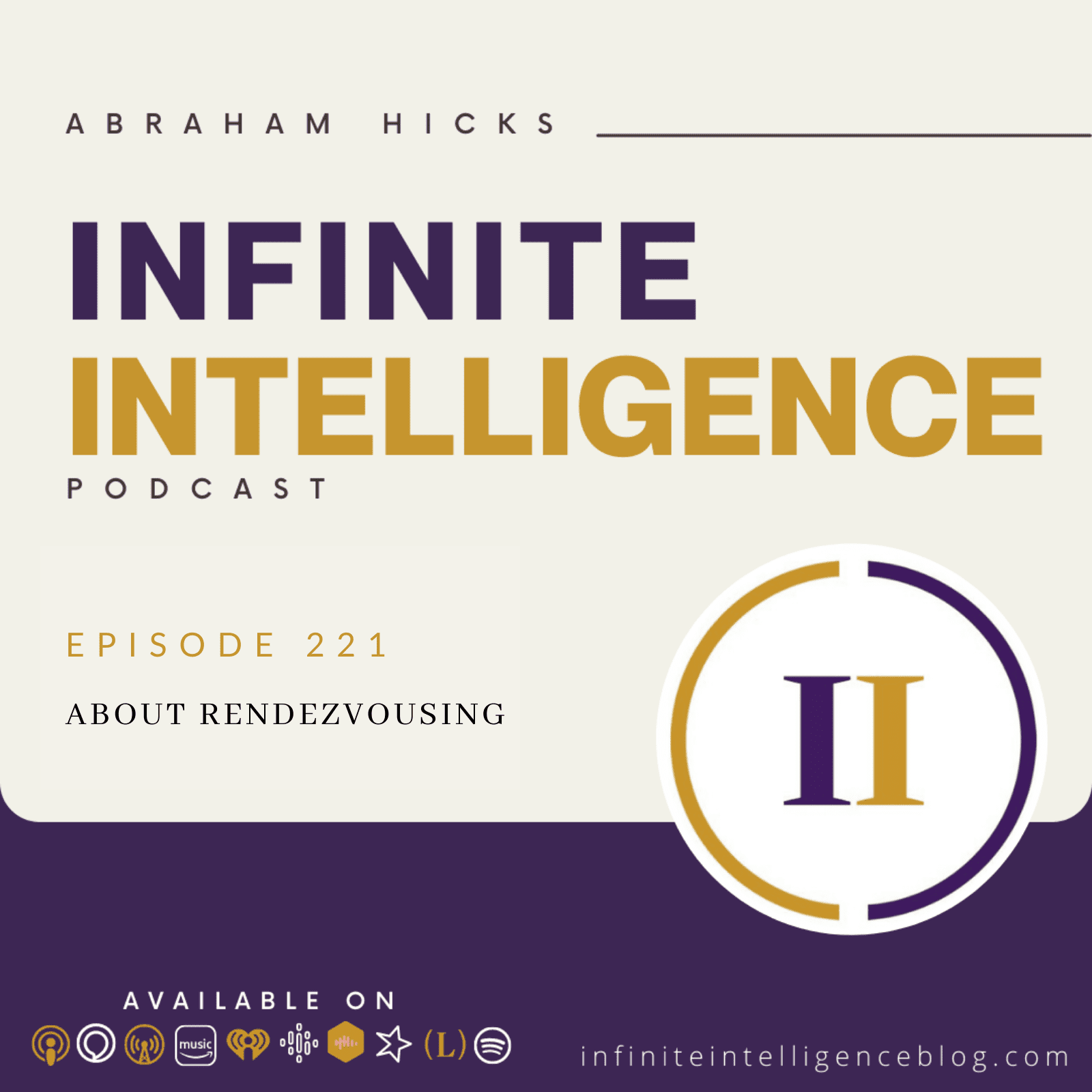 I have another question. In regards to rendezvous. For me, it’s like the play of both parts me and another person things or events. I imagine, like we all color coded in 1000s of different vibrational colors. The source is matching up all the different events or people who are on the same colors at this moment to create a rendezvous. It’s a good way of looking at it. And we probably shouldn’t blame anyone or anything in our life.

Because if we look at the Lavonne sitting next to us, if we have a fight, I can blame them because it’s my inability to control my vibration. So I’ve created the EU and otherwise you know, you wouldn’t sitting next to me. Everything is always fair. So I would like Abraham to expand on the rendezvous house, do we? Well, rendezvous is one word and one word only rendezvous means vibrational match. And vibrational match means Rendezvous in every way that you mean rendezvous. So you’re right. There is no accuracy in blaming anyone, for anything that’s happening to you.

Because no matter what they are offering vibrationally, if you weren’t offering it to, you wouldn’t match up with it. Someone who doesn’t have control of their vibration, wants to blame others. Because if you’re not consistently in alignment, meditation really helps. If you’re not consistently in alignment, then you could be all over the place in terms of your vibration, and therefore Rendezvous in with others who are all over the place in their vibration. And then the tendency is to say, Well, I didn’t mean to do this. And so therefore it must be your fault. Well, it doesn’t matter whether you did it intentionally.

And there’s a tendency to only take note when it comes to you. And then you want to look at who brought it to you. Well, you brought it to you because you broadcasted it. Isn’t that interesting? So you’re observing something unwanted in a relationship or in your life or whatever. So your broadcast isn’t therefore bringing more of it to you. But when it gets there, you say, no, no, no, I wasn’t asking for this. I was asking for something else.

You seem stunned. For me, I have a picture in my mind, like the journeys is like, I have everything in the vortex. And if I’m in a good mood, I’ll Rendezvous in a way is the source will see me unfolding. But if I’m in a bad mood, obviously unfolding a different way. So if I were given this, the same environment, but I will have a two different story on the same day. And I would like to create more of the vortex rendezvous. Well, there’s some by the rendezvous. You see if you could, if you could just make this one temporary adjustment.

If you could say, I am satisfied to rendezvous with the feeling of my vortex for a while, rather than the manifestation of it, if you could just decide that it is enough for now to just rendezvous with the feeling of it. Then we want to find a way to say this to you. So we’re just going to get real blunt. So brace yourselves. We said it to you already. We’re gonna say it more clearly. Now. You’re never going to get everything that you want out of your vortex because you’re going to keep putting more stuff in.

And so we want to ask you if you have accomplished an understanding of now, and if you are consistently in alignment with who you are. So if your now moments in terms of manifestation are rich with rendezvoused, and dancing and words and loving and delicious, rendezvoused, and high minded conversations and experiences and CO creating, if you’re now is rich with all of that, do you really cared that there’s more still coming? Or do you want it all today?

You don’t want it all today, it’s like you don’t stand out on your porch and say, Today, I will breathe all of the air that I will ever breathe today. I want it all I want it all now you’re happy to let it just keep coming. And just keep sustaining you and supporting you and thrilling you and enlivening you. And so the creations in your vortex are the same way. Here’s a question for you. So you understand the concept of planting seeds and raising crops and harvesting crops and eating food?

Your inner being is aware, your inner being sees the full potential of them. Things are just dating and getting ready for you. So how about you get into the receiving mode, and then you having the fun of the harvest? Now nobody really wants to work in the fields we know. But there’s so much pleasure for you to experience as you begin to get your hands on the things that you’ve created. There’s so much more to the creative process before you get physically involved with it.

Stay with us, we’re almost there. Can you see from the intense, deep, accurate, important conversation that we’ve been having just now? Can you see how if you could just do the simple thing of live life and throw things into the vortex and not worry too much about it. And then just find some way somehow to be happy. Only for the reason that it feels good to be happy.

That’s all, you just want to feel good because feeling good, feels good. And then because you’ve mastered feeling good, then you get to play in this creative realm in the way that you’ve intended with rendezvoused and CO creators and brilliance flowing into your mind and into theirs. It’s taken us a while to bring you to the place of understanding that you are more than this physical body. And it’s taken us a little while to help you to understand that there’s a non physical part of you who’s actively involved in all of this.

And now you’re asking for a blurring or a blending of the two of you, of you and you of you and you and us of all that we are and we’re asking you to just get happy so that you can experience the pleasure of what you came to live. So how does your intentionality get in on this anyway? What is the importance of what you want in this mix of eternal and certain motion forward?

What is your important role in it? You are the decider you are the one that gets to take life as it now is right here and this important and emphatic now you get to live life today. And you get to feel how it feels to you. And if it feels perfect, then you don’t throw anything else into the vortex. Never had a day like that have you? And if it feels like it could be more than you throw more into the vortex and off it goes again. And so we just want to say to you deliberate creative beings that you are genius, intelligent, deliberate creators that you are.

We want you to know that you don’t need to spend so much time as you are spending trying to get the things to manifest in Your experience are trying to orchestrate the rendezvous, whose life is taking care of that for you, if you would let your dominant quest be to chill out and enjoy life, and to look for value, wherever you can find it, you would discover that this trend of alignment would overcome you in such a way that you would emphatically move through life being joyful in every moment that you are consciously awake, creating things that those who don’t understand what you understand, would be standing back in amazement that how is it that you do this so easily.

And you say, I let the power of the universe do the work. I let the engines of the universe do the work. I guide and direct because I’m the orchestrator. I’m the creator. But I’m not in the trenches. I’m not the engine that’s making it go. Law of Attraction is the engine. Source Energy is the ultimate guider of all wellbeing. And I am the decider of the individual places that this new world will go, you are not just creating your own reality, you are creating your own reality in conjunction with everyone else who is creating their own reality.

And this mass consciousness is collectively creating this physical world in which you are living. It’s big, and it matters. And it’s important, but it’s for the joy of it that you’re about. It’s not for any other reason. You can’t get it wrong. Everyone on the planet could misunderstand this for a little while, and you would still be and everyone on the planet does for the most part misunderstand this to a large extent. And you would still be sifting and sorting and putting things into the vortex and things would still continue to come.

There is no defining moment where you have to decide forevermore, what it is you’re wanting to live. You’ve been decided incrementally. Are we too far out on the leading edge for you? Can you feel that your vortex really is you? Are you starting to feel what you’ve done in the creation of it? And are you starting to love it even though you can’t see all of it? Even though you can’t see all of the potential that it will be? Don’t you feel love for it anyway, love and appreciation and anticipation for it? And doesn’t it exist to something that is real and meaningful?

And aren’t you happy to stand in the existence of it and allow yourself to feel the unfolding of it? And can’t you see that the poignant pneus of life is just been in that readiness where your vortex can unfold for you. Yes.

Oh it is so delicious to play with you enough second round so what’s the difference between blending those lines and blurring them? Isn’t a blending is sort of blurry isn’t when you stop noticing such a distinction in your physicality. And you start blending with what’s non physically coming is a blending and blurring sort of the same thing. Yeah.