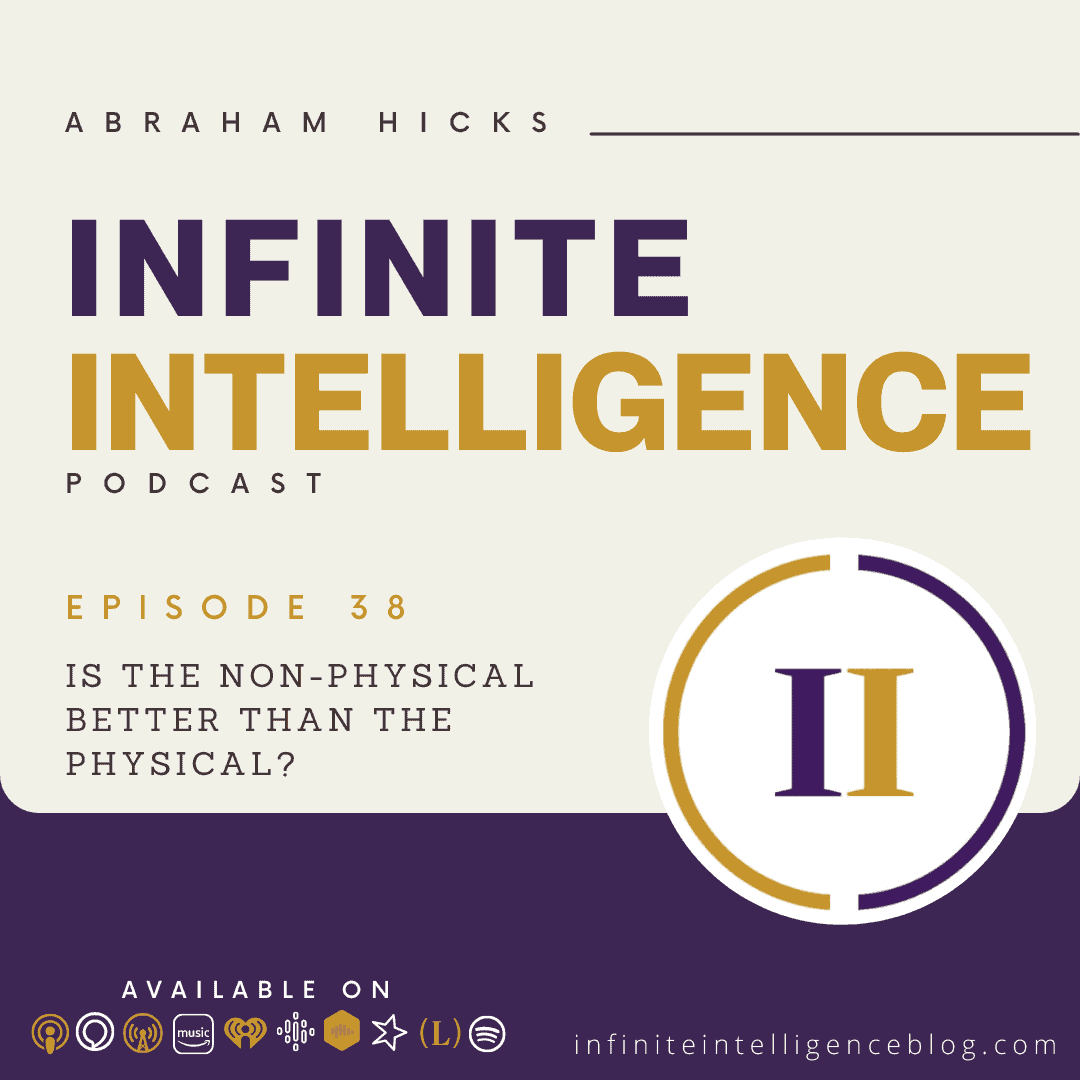 Infinite Intelligence Episode #38 – Is the Non-Physical Better Than the Physical?

So we get the benefit of all the new, fantastic ideas that are occurring out of what you’re living, we get to be in on that leading edge with all of you. The only discord in all of the universe is the human who pinches himself off from that stream. Because source never does, but human can. But when you reemerge back into non physical, you’ll stop that. You do what? When you reemerge when you croak? You will stop resistance. And you’ll be in that full non physical energy.

It’s where all the juices are flowing. It’s where the non physical energy is popping into the manifestation for now, and the next in the next and the next and the next. And so sources right here, right here. That non physical energy right here always present. That was the thing that Esther has most been enjoying her further understanding of recently, she could feel the enthusiasm of people she know, who have made their transition and their awareness of what she’s doing now. And their enthusiastic enjoyment of it. eBuy in that

Now, catch, just feel all of that source material, that source energy coming forward. But the thing that we really want you to hear and you’re ready to hear that is that source as it continues to come forward, keeps up with the leading edge, keep up with it, it’s only humans that get set in your ways and won’t come forward.

So what is it about the in the flesh that makes it more? I mean, you said that the purpose of perfection is to be more and more and more, how can we be more in the flesh rather than the non physical? Well, the advantage that you have of being in this contrast in environment is that out of the contrast is born the new desire. The disadvantage of it is that there’s a contrasting environment to observe.

So that’s why we’ve been explaining for a number of years that step one is, know what you don’t want sift and sort which causes you to ask for what you do want. And then step two is source accepts what you’ve asked for, and becomes a vibrational match to it. And then step three is, you got to get up to speed with what you’ve asked for. You can’t keep beating the drum of the not enough miss that caused you to ask, you have to find some way to be a vibrational match to what you’re asking for.

So as you are here in this physical format, we’re answering specifically that really good question that you just asked. As you’re here in this physical format, your observation of what is is what slows you down the most. Because what is often doesn’t contain the new idea that you just hatched. So your observation of what is that’s what those hindering beliefs are, just keep focusing on what is even though new desires and better ways have been discovered have been desired by you. The first step in a new invention is a need in an environment that causes you to want things to be better.

And so then all kinds of things are happening. That’s why, how common it is for inventions to pop up all over the world. Simultaneously, because mass consciousness has been asking for them. And law of attraction has been gathering the components and it’s there ready to be received, it’s being revealed ready to be received, but only a few are in the vicinity of it where they get to receive it.

So you’re asking a very important question, why would anybody hold themselves out of the receiving mode. And we say, simply because they do not understand that it’s there for them. They don’t understand. They have forgotten their well being. They’ve been observing what is for so long, that they have forgotten. But then what happens? Lots of you begin asking, and here we come to remind you what you already knew that you have forgotten.

That’s what these conversations are about, to remind you of what you knew that your days in this physical experience, and your intoxication with focusing on what is has caused you to forget, like that filter a friend was talking about. He put up filters that don’t serve you didn’t even mean to do it was just sort of a natural consequence of observation.

We’ve been saying for a long time that almost everyone offers most of their vibration in response to what they are observing. Well, under those conditions, things can change very much can they look how much people want to look back and talk about what has been instead of standing where you are in the receptive mode of everything that you’ve been asking for.

That’s why when the young ones come they don’t want to listen to the old ones, because they still feel optimistic. They still feel that they still believe in possibilities you say, helpful. Yes. Food for more thought to eternal yesterday. This is a very good time for segment of refreshment.