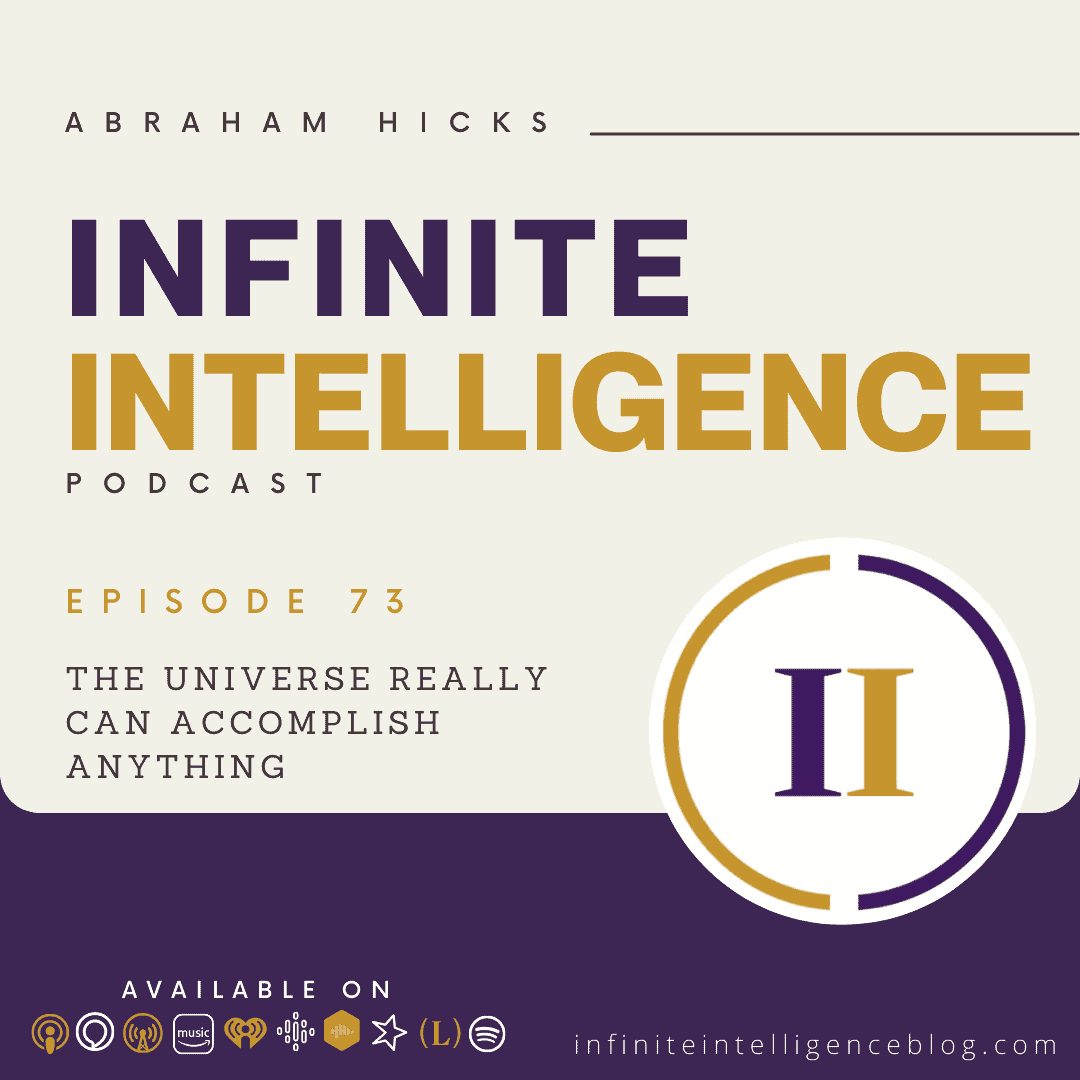 Infinite Intelligence Episode #73 – The Universe Really Can Accomplish Anything

Thank you. I wanted to share a compassion story. I’m working on a big TV show. And you know, at the beginning, it’s very easy to feel align, and to keep that momentum of knowing that things are always working out for you. And there’s sometimes the project doesn’t seem to go the way you want it to go. And then you start to feel stressed. And you’re wondering if it’s all gonna work out, really, because you’ve lost sight of what you want. And you’re looking at what is

That’s right. Yes. So that’s how I felt two weeks ago. And I had promised to a friend that I would go with her to a big Congress a long time ago. So I had to go. And it was very helpful for me to just step out of the project for a weekend. Yes. And at that moment, and stop looking at what you didn’t want. Yes, yeah.

So this Saturday morning, I was going to the restroom. And while I was washing my hands, I could hear a woman in the restroom that was complaining and I thought like, maybe I should wait and see what’s happening. And when she opened the handicap, toilet, she was walking like very slowly. And I asked her if I could help her. And it wasn’t for pity, you know, I wasn’t pitying or like, I just wanted to be there.

And, and so she said, Well, I’ve been having a hard time I feel exhausted, look at my hands and her hands were all like, she had no muscular tone, tonus they were all like, you know, backed up like that. So she said, I have a hard time pulling up my panties and my pants. So that’s why I feel like that. Then I said, Well, is there anything I can do? And she said, No. So I introduced myself and she also did that her name was Mary Teresa. And so I left the bathroom and then went back to whatever I was doing. And in the afternoon, I went to another restroom.

And it’s a big, big crunk Congress Center, like here, and there’s like, 3000 person there. And once I was washing my hands, Marie Theresa comes in and she says, Oh, how lucky am I to see you again? And I still Yeah, me too. And just how to the blue is I say, Well, would you like me to help you with your panties and your pants?

She said, Would you really? And I say yeah, of course. So I went into the restroom with her. And I did that feeling very comfortable. And I was impressed to see like that I was feeling comfortable doing that. And I was just like, so anyway, so we hugged again. And I said, well, there was like, I feel, you know, I felt great. And all that. And then the evening, we had a gala. And this had been planned for a year. And we had like a table number assigned and all that. So me and my friend were at the gala and waiting for the other guests to come at the table. And here comes Meriter you.

Yes, we’ve already met. And she says, Oh, I feel like I just won the lottery. Like that. It’s a vibrational lottery isn’t it? It is. And so when you hear something like that, when you live it or have the opportunity of hearing something like that. So this lets you see that no matter what anyone is asking for are no matter what anyone is needing. There is always an avenue for the satisfying of it always. And it’s always nearby.

And so if the universe has the wherewithal to orchestrate something like that, where someone with some maybe even embarrassing need, could bring to them. Someone like you so comfortable in the process of it, doesn’t it make you understand that the universe can accomplish just about anything? And there’s also another way of looking at this, you may be looking at it like well, this is just a coincidence. Anyone who was there would have helped but that is certainly not the case. It was nothing to do with a coincidence, it was a more textual orchestration with two people in the state of allowing, allowing the convergence for the perfect co creation.